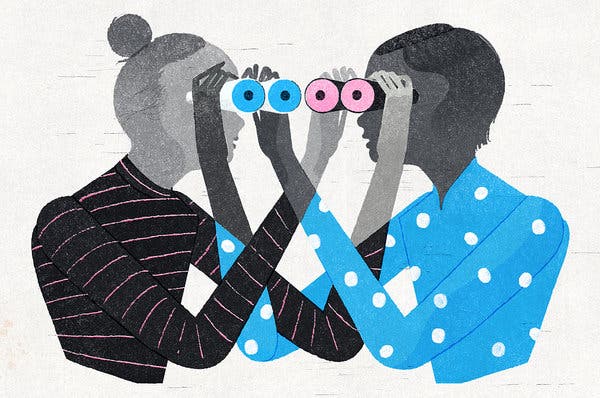 The pervasive nature of corporate life is now exacerbated by social media’s ‘echo chamber effect’; Making it harder than ever to see the World as others see it

What on earth prompted the US sports brand, Peloton, to conceive (leave alone) approve a Christmas advert which featured a woman ‘getting in shape’ for her man, using the latter’s gift of a Peloton’s spinning machine? The scene is excruciating to watch – what sort of message is an unsolicited exercise machine to a partner of either gender? – and prompted a tirade of criticism, abuse and irony (of course) on social media.

I’m not doubting the professionalism of either Peloton’s marketing department, or its advertising agency, Mekanism; both, I’m certain were working in good faith, anxious to differentiate their brand amid the Christmas noise. They certainly succeeded in creating notoriety; prompting a drop in the company’s valuation of 15% immediately following the controversy.

I’ve previously written about the difficulty in house professionals find in considering their brands in a genuinely objective manner. For many, it’s an existential question; they are remunerated and incentivised to defend these brands, after all. But it’s difficult to believe any PR professional would not have spotted the risks associated with Peloton’s patronising Christmas message.

Such missteps are not the exclusive domain of marketing and communications departments. It is unlikely, however, that an experienced communications professional would have missed the incoherence of the investment fund responsible for Wall Street’s inspiring Fearless Girl statue, and their (illegal) policy of remunerating male and female employees distinctly.

I can’t verify whether the communications teams in question (in house and/or consultancy) where involved at the original ‘policy’ stages of these incidents; but if their roles were just limited to damage limitation post facto, then these organisations, and our profession, are missing an opportunity.

Empathy – the ability to see the World through the eyes of others, even if we don’t agree with them – has never been in shorter supply and higher demand. Public relations – the earned kind – is actually based on empathy; finding the intersections between different agendas, priorities and points of view. The parties in question could vary from journalists, analysists, or customers, to regulators, elected officials or celebrities; the essence of our role is to anticipate each protagonist’s position and develop strategies to find common ground towards collective, mutual benefit.

I believe that social media is directly impacting our capacity to relate to, and take an interest in, others. In our community, evidence is everywhere – from the ubiquitous headphones worn ‘en permanence’ by professionals (to, from and at work), to the reduction of ‘life watching’ to a social media feed (there is plenty of life beyond the screen!). Human interactions should never be reduced to a transaction, but I see a determined trend towards a form of ‘information brokerage’ – relationships based on the exchange of requested information, and little else.

Quite apart from the personal impact of such ‘desiccated’ relationships on our quality of and contribution to life, the professional consequences of such reductionism are alarming. The World has never needed higher levels of empathy; social media is polarising discussion to either echo-chamber agreement (amongst friends), or simple confrontation.

Our clients have never been in greater need to know what the outside World thinks, how it will react to a particular decision, and why they think in a particular way. As communications professionals, we may not always be able to change the decision, but we can help mitigate the risks associated with the same.

Peloton’s stock price rapidly recovered, and State Street Partners eventually reached a settlement with their wronged employees. But empathy remains the need of the hour.

If nothing else, its continued absence means its stock has never been higher; business will pay a premium. Putting down your smartphone and taking a fresh look at the World could represent a great career choice!