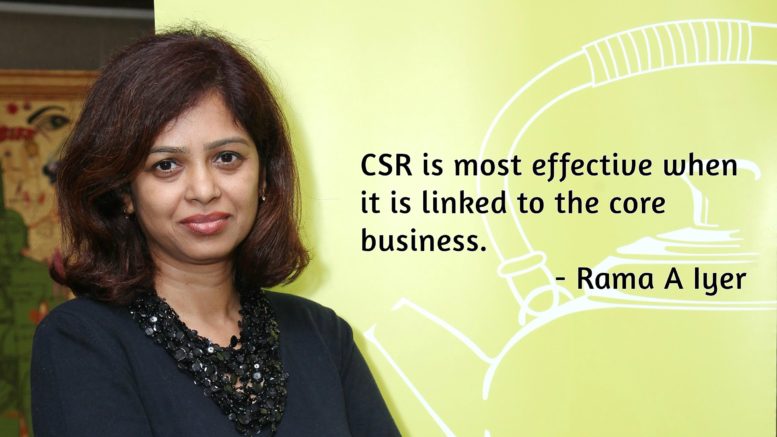 Rama A Iyer, Founder Director, WhiteKettle Consulting Pvt Ltd strongly believes that as corporate India grows, so does the need for a more progressive relationship between businesses and communities. Today, a company’s CSR policy defines who they are, where they want to go and how people perceive it. So it comes as no surprise to see so much debate and dissecting of the topic, she discloses. Speaking with Shree Lahiri she reveals her exclusive take on some of the fundamental points of discussion in India’s evolving CSR culture.

RT: Some companies’ CSR reports focus on philanthropy as a driver of CSR. Please comment.

Ans: When it comes to giving, intent matters. If you look back at our history, the simple act of giving back is not new to India or Indians. Though much of this giving has often stemmed from an inherent guilt, where those who have a lot felt the need to give back to those who didn’t.

In the era of empires, it was the kings and queens who ensured the welfare of their people — be that with regard to health, livelihoods or support through disasters like droughts, wars etc. Things changed in the Gandhi era, when it was big industrialists like the TATAs and Birlas that engaged in philanthropy, looking after their employees in terms of home or medical benefits. And even today, the guilt-giving continues. You don’t have to look to far to see the same principle in action, when we ‘take care’ of our staff, like with their child’s education or health benefits. Essentially, this is because the State does not provide social welfare, so naturally the onus is on those who are at the top to help those who aren’t. I’ve found that a lot of times, CSR is seen as an extension of this. That if the corporate makes any kind of benefit (not necessarily profit), it takes away from ‘giving’ and therefore isn’t really CSR.

This is why intent matters. Personally, I look at philanthropy as an individual ‘CSR’. From a corporate point of view, where it’s not individual wealth and you are answerable to shareholders, CSR is most effective when it is linked to the core business. That’s when a corporate has a more purposeful approach to their CSR mandate, which allows them to then not only contribute wealth, but also R&D and expertise. Most importantly, the organisation remains rooted to the cause long enough to see genuine benefit in the community, with pure intent.

RT: Do you think CSR is an investment for the future?

Ans: Changes can be quick, but long lasting ones take time. To answer in a word, yes. CSR is very much an investment in the future. Look at it this way — it’s no different from addressing a key market need, only much more layered, complex and deep rooted. Like take the issue of child malnutrition. It’s not as straightforward as children not getting enough food — it’s the fact that most of the mothers are malnourished, so the likelihood of her baby being the same, is high. Then you have to ask, why is the mother malnourished? It’s because in some communities, the women eat last, and mostly the leftovers. So you can’t achieve success unless you address the intrinsic gender issues.

It might sound clichéd, but you need to have a comprehensive approach and to stay with it for a while to be able to get to the core of the issue.

RT: How are companies today focusing on directing social responsibility to touch lives of communities?

Ans: Your approach defines the impact you ultimately have. So there are three kinds of people who take on CSR:

First, the ones who do it because it’s mandated and they want to abide by the law.

Then there’s corporates who have found the perfect overlap between their business needs and a social cause — for them CSR becomes a huge area of focus throughout the organisation, in terms of resources, people and commitment.

And last, there’s the mid belly — who want to do CSR the right way, they initiate interventions in the known areas of education, health etc, and are now getting together with NGOs or groups to monitor outcomes and overcome different challenges.

So naturally, the more hands on the approach, the more involved and committed it is, the stronger is the impact on the communities.

Ans: Is there any such thing as doing enough good? Honestly, it depends on how you define ‘enough’. But rather than that, companies should focus more on ensuring that what they are spending, is being spent well and that resources are maximised. Personally, I think they can achieve a lot more if they get CSR to be driven by their core team; where it’s not just a day’s worth of volunteering by the employees, but a part of their Management by Objectives (MBO) and time set aside for it. They need to have more involvement, to really care. Which brings me to my final point, the need to believe in the outcome as their objective, and not the mere act of giving that ‘2%’.

RT: Have companies created a clear CSR identity? Any examples?

Ans: A crucial step for every corporate on their CSR journey. Currently, CSR identity is evolving at two levels – corporate and brand. Two very successful examples are Lifebuoy and IDEA, where the brands had already found the social filter as their core differentiator and have therefore reinforced this, post the bill. Take Lifebuoy, who in positioning itself as the hygiene expert, is perceived to be the leader in preventing diarrhoea-led deaths among children. IDEA again has used their platform of an idea to solve a social issue, and what I assume started off as a creative idea is now its identity.

For corporates to have a clear CSR identity it will take longer, because it will need visible, scalable success stories.

RT: What do you think are the common problems faced in this area?

Ans: Too many successful pilots with very few successful scale-ups. I see the key reason being the way we measure our progress. We’ve always looked at it in terms of input, amount and man hours spent. Even in terms of outcomes, we look at it rather analytically. But like I said earlier, India’s social issues are highly complex and subjective, so measuring them is even more difficult. We are still grappling with it, even after being in this space for over 7 years.

And it doesn’t help that we don’t bother to learn off each other. Reporting, monitoring and sharing of information is low, making it even harder to determine success.

RT: What do you think is the way forward? Do you do you see any definite scenario emerging?

Ans: The next step is the only one that counts. The conversation began at 2%, now it’s up to us what we say next. My belief is that the next discussions should be about focus on outcomes, and not input. Not just 2% profits but 2% employee time and commitment. Let’s have a few, more tangible goals drawn from the Bill, and all energies and resources focussed towards it. And hopefully that’s the direction we are already taking. I think there will be few focus areas: more corporates and stakeholders coming together to jointly address needs.

But above all, I believe the biggest change agents will be our children. They will grow up more aware of their rights, and demand that all stakeholders comply so that India and the world are a better place for them to live in.

Be the first to comment on "Guru Speak – Rama A Iyer"

In Conversation with Kavita Rao

The red flags we need to be aware of