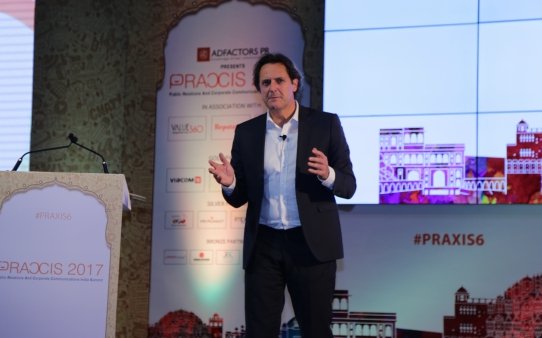 Giving us a sneak peek into the future through the next wave of transformation, which is around the corner, was Guillaume Herbette, Global CEO MSL as he spoke on Augmented Influence: How a second technology revolution is changing PR once again.

The First Technology Revolution was aimed at the media profession, giving rise to ‘new media’ which is one of the pillars of a new digital world. The rise of social media has allowed everyone to become a publisher, he said. But, the power of traditional media is diminishing and digital influencers are replacing journalists as third-party endorsers. Influencers have come onto the scene and essentially transformed their social presence into selective sources of information, opinions and news.

But, the world in continuous change. We have to re-imagine our future once again.

Coming next is a Second Technology Revolution driven by the impact of data, analytics, artificial intelligence and automation, combined with new immersive technologies such as virtual reality, augmented reality and mixed reality. This Second Revolution will set its sights primarily on business. Businesses smart enough will create a storm of market disruption not seen before.

These new trends usher in the Dawn of Augmented Influence. This is all about how a second technology revolution is changing the PR business once again.  “A few years ago, we saw the power of digital influence grow as Millennials emerged as the choice marketing demographic,” he shared. In India 850 million are under the age of 35; by 2025 Millennials will represent 75% of the global workforce; in less than a year (2018), Millennials’ earning and spending power will outpace baby boomers. Almost three-quarters of Millennials say they influence the purchasing decisions of other generations.

Today 92% trust influencers over brands; 70% consumers turn to third-party content to gather information about brands. Peer recommendations drive twice the number of sales as paid advertising. The digital transformation has changed the environment, and is redefining what ‘earned’ is about. Earned media coverage earned conversations, earned content and influencer relations, he emphasised. With a $15 billion global industry, the capabilities and importance of influence in communications and marketing are exploding!

People are spending a lot more time browsing the internet, making it a hugely important vehicle for marketers. And the statistics are like this – in 2015 people spent 8 mins per day and in 2016 45 mins per day. In spite of all this, the reality is that – “the effectiveness of online marketing has been poorly understood, and hard to measure”.

What was the scenario today? It’s multi-faceted – we earn great stories for our clients everyday, we earn credibility, we earn trust and we earn love. But our stories have been limited by the reach of the publisher and the influencer. And we’ve never been able to directly connect earned media to sales in the real world, and harness the power of influence to drive brand and commerce.

Then the spotlight was on their end-to-end model – CONVERSATION2COMMERCE, which aimed to quickly identify credible and influential earned conversations to capitalise on, convert to paid earned content units via proprietary technology, target and scale to precise users via paid programmatic and behavioral targeting and the drive to commerce move. Quoting an example, he said that in a new product launch, they helped a top retailer launch a new high-end bedding product, where both interest and awareness were low, and secured and capitalised on influencer content to scale and drive commerce (online and in-store).

Next in line, the Second Technology Revolution will be driven by automation, Big Data & Analytics, combined with new immersive technologies such as virtual reality, augmented reality and mixed reality. This Second Revolution will target business. Businesses smart enough and quick enough to make creative use of the new innovations will create market disruptions that we’ve not seen before, he pointed out.

Visa’s augmented reality-based promotions in Poland for their ‘Try something new with Visa’ campaign involved the use of AR as a means to interact with people in public spaces.

Brands and companies have already dived deep into the study of Artificial Intelligence. According to insideBIGDAT, 300 % is the predicted growth of Artificial Intelligence in 2017. As per Forrester, the amount businesses that use AI, Big Data and Internet of Things will steal from their less informed peers by 2020 will be $1.2 trillion per annum! Data, immersive tech and artificial intelligence are deeply interconnected. Bots boosted by deep machine learning and Immersive Technology are transforming the way we interact. AI actually is what unlocks the insights from big data.

In the Q/A that followed, Nandini Chatterjee, PwC asked – if there was some gap that augmented influence was trying to close? His answer was short and crisp – there’s no gap, it’s continuing.

Keeping everyone happy in the TV-watching family

It’s not High, till its Achieved!