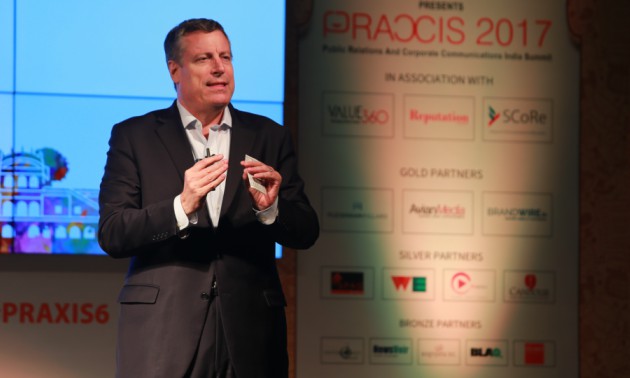 The world keeps changing faster than we think. It’s not enough for the communications business to keep pace with this change – we need to be ahead of it, in order to help our clients keep in contact with their audiences, said Rob Flaherty, Global CEO, Ketchum in his keynote session at PRAXIS 17 on What it Takes to be a Fast and Fearless Communicator.

Shifting to social and the mobile that have brought about a democratisation of media. With everyone having a mobile, “news finds you”.  “When I was growing up, news was a destination, but now news finds you! The fearless break through is that you are important for the news to find you,” he said.

Referring to a study by Ketchum, he pointed out that the finding was that 60% of stories being shared in India are in Hindi!

All research says belief in institutions are coming down – the trust factor. The shift in power is tilting towards individuals and communities. Now, the most trusted source of information is something recommended by a friend, who is a trusted influencer. The demand side of news, that’s where the action is – he pointed out. Why are we pushing our news, instead of listening to what consumers are talking about and adding value? You better be fast and fearless, to break through the clutter, was his advice.

How to be fast and fearless? Firstly, prepare. It’s imperative to gear up all brands as content publishers, and it’s important to add that dynamic now. Today, we have cinematic storytelling, 140 character tweets, infographics – content has really exploded!

Secondly, plan for contingencies. There must be a plan to improvise. In PR we come up with our stories and we don’t know when your story will run or it may not run; there may even be some negative cropping up. It’s a business of trial and error.

Another aspect is the ‘talent’ quotient. Specialists are required, who back up both the right and left side of the brain. The right brain caters to the rational side – social listening, research, insights, planning, amplification and measurement. The left brain which is the creative part, covers – ideation, writing, video production, design, illustration and animation.

‘Culture’ garners significance here, as culture is important and huge during any change. “Risk taking in Corporate Communication was not that high as in Advertising. We have to be taking great risks,” was his insight. Highlighting the element of risk tolerance, he quoted Kraft’s Stove Top story. They latched on to a message that went went viral from a grandma, who accidentally texted the wrong person, thinking it was her grandson, inviting him to her Thanksgiving dinner. Quick on the uptake, they reached out to the teen to coordinate a year’s worth of Stove Top stuffing sent to their Thanksgiving dinner, which was amplified on social.

Wasn’t this a hit? It wasn’t just a funny story that went viral, but it had a feel-good characteristic to it because it went back to what Thanksgiving is all about! And, the result? Stove Top Stuffing’s social engagement and amplified reach, which was used to pitch earned media. The effort was covered in stories that featured the teen and grandma!

Then there was the Lucky Charms episode. Through “always on” social listening efforts, Ketchum saw that NFL athlete and Dallas Cowboy wide receiver Lucky Whitehead was a cereal lover and a Lucky Charms fan, and he was tweeting at the brand on Twitter. Within hours, they responded to Lucky and sent him a surprise and delight “Lucky Charms Good Luck Kit” with a branded “Magically Delicious” gold bowl, gold spoon and several boxes of his favorite cereal. Soon after, there was a viral video featuring members of the Cowboys’ team eating their favorite cereals including Lucky eating his Lucky Charms. They responded (with the Wheaties team who was also featured) on Twitter immediately and sent additional Good Luck Kits to all football players in the video – resulting in additional social content.

Lastly, there was the H&R Block instance, where they managed communications surrounding an unexpected, negative event online. When presidential candidate Donald Trump said he wanted to “put H&R Block out of business,” it was crucial for H&R Block to find a way to monitor the online conversation, scan for negative mentions or coverage and craft an informed response. Through real-time monitoring, Ketchum identified when the conversation bubbled up or subsided and gauged the sentiment. This knowledge informed their response strategy that was integrated with the corporate communications team. They integrated the listening with the PR team’s monitoring to see the true pulse of the conversation.

The results? The response from Kathy Collins’ Twitter handle alone received more than 2,600 impressions and 137 engagements in just a few hours. The feedback to Kathy’s response was positive across the board. H&R Block stood its ground against Trump, while not inciting any further conflict! Through Kathy’s response and leveraging her personal Twitter account, she was able to further amplify the message from a human angle, giving the response a face rather than simply coming from a corporation.

Finally, when Tara Rogers Ellis, Mojo PR asked him how “the fast and fearless” wave filtered down to all offices, globally, he admitted it was a challenge. But, his request to people was: “Don’t do what the client asks, but bring the client along and make the market!”

Digital marketing trends that dominated the first half of 2020