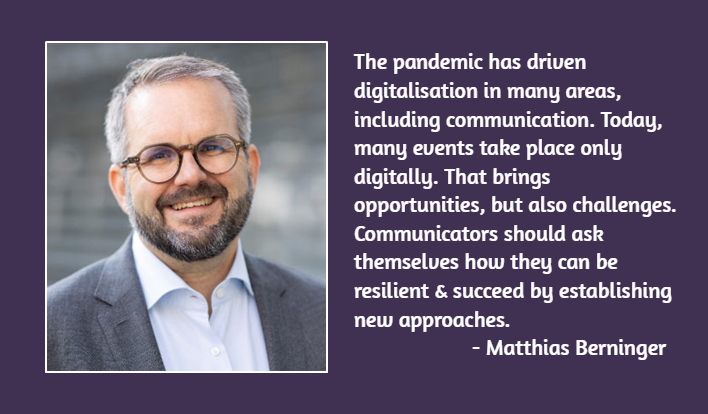 RT: “The world must find a new balance between production and protection”. How are you achieving this balance at Bayer?

MB: Bayer’s approach is to focus on the science, even when it is inconvenient for us. The COVID-19 crisis has shown that we can reduce our environmental impact by changing our behavior. But, at what price? Millions of people have lost their jobs and the economy has collapsed. That is why we firmly believe that we need break-through innovations so that the 8 billion people, who will soon live on earth, can thrive within planetary boundaries. Therefore, we are transforming our business model in order to achieve a balance between production and protection in the areas of health and nutrition. One example are synthetic fertilisers. They enabled farmers to meet the growing demand for food throughout the 20th century, but their use has a significant impact on greenhouse gas emissions, accounting for2% of GHG emissions worldwide, and on the ecosystem via nitrogen runoff. With Gingko Bioworks, Bayer co-founded the company Joyn Bio, which is seeking to develop a paradigm-shifting technology that would enable nitrogen fertiliser to be produced by microbes.

RT: Your plan was to become a teacher, but that changed after you got elected as youngest ever German MP in 1994. What led to you getting into politics?

MB: The first UN summit on climate in Rio 1992 made us aware of the need for transformative change. I wanted to support political forces that strengthen sustainability and I am glad that this mindset is now increasingly becoming mainstream, most notably demonstrated by Europe’s and China’s commitment to achieve carbon neutrality, God willing still during my lifetime.

RT: How did the transition from politics to the corporate world happen?

MB: When I was elected for the fourth time, it felt I was on the verge of losing my independence. I did not want to become the type of politician who would bend in order to get reelected. That’s why I decided to move on. I was blessed with an opportunity outside of Germany, first in Brussels and then the US, which allowed me to combine my general experience in government and parliament affairs with an increased understanding of business. For that, Mars was a wonderful company which has the reputation of being a breeding ground for excellent business leaders for good reason. When I was offered the position of Head of Public Affairs, Science and Sustainability at Bayer, I saw a great opportunity. As a company active in the fields of health and nutrition, Bayer can make a major contribution to sustainability. And in my role, I can make a significant contribution. Just as the desire to strengthen sustainability led me to become a politician, it was the same desire that motivated me to take the position at Bayer.

RT: Would you go back to politics in future? Why?

MB: I have the old-fashioned believe that politicians serve their countries. Therefore, if I was asked to do that on a national or any other level and felt I could genuinely make a difference, who knows? For now, I feel I can bring my experience to help transforming health and agriculture to the table.

RT: What should communication professionals look forward to in 2021?

MB: The pandemic has changed the world and will not be over. This will change the environment in which communicators operate for a longer period than initially expected. The pandemic has driven digitalisation in many areas – including communication. Today, many events take place only digitally. That brings opportunities – but also challenges. Communicators should ask themselves how they can be resilient and succeed by establishing new approaches.

Be the first to comment on "In Conversation with Matthias Berninger"

Lord of the Brand – Fellowship of the Regions

2022 – The year of ‘Systemic Renaissance’ for PR and Communications