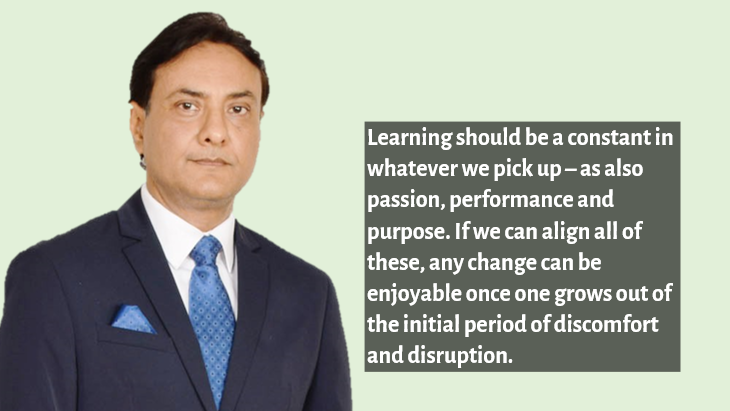 Finding your passion is certainly the secret to professional success. And catching up with your passion early in life can prove to be a game changer, specially when it evolves to become your purpose. Like it worked out for Shubham Mukherjee, Head Corporate Communication, Editorial & Marketing, Bain & Company India. He discovered that playing with words was something he really enjoyed. The joy of seeing his name in print and the recognition it brought in his school days led him up the path to the world of communication and brand storytelling.

With a multi-faceted experience spanning 25+ years across journalism, corporate communication and marketing, Shubham currently heads the external interface at Bain & Company India. A former business journalist, he spent over a decade at The Times of India as national Business Editor and The Economic Times as Senior Editor. His stint as a journalist tracked three cities – New Delhi, Ahmedabad and Mumbai, and he covered diverse sectors such as steel, power, infrastructure, technology, consumer goods, aviation, automobiles, finance, PE and pharmaceuticals. He is also a Chevening scholar and serves as an independent member of Bihar government’s Bihar Investment Promotion Committee in an advisory capacity.

In this conversation with Shree Lahiri, he waxes eloquent on the early beginnings when the magic of writing cast its spell over him, his transition from journalism to corporate communication, his journey at Bain & Company India, some tips for new professionals and more….

RT: Tell us about your journey into the world of media and communications. What led you to becoming a journalist?

SM: It all started with an article in the school magazine – the excitement to see my name in print was heady. Later, while at college I would regularly contribute city-specific articles and interviews with Indian Classical exponents for a couple of national newspapers. The access and appreciation of their art came by virtue of my being a Spicmacay member. However, something I was really proud of back then was a regular column on audio and video reviews. What was essentially a hobby to start with, soon became a source of pocket money too.

By the time I was in senior college, the passion for writing and the resultant recognition now also included the need for making a difference to society. That’s the story of how passion and purpose – much before the words became fashionable – combined to lead me to the Newsroom. The route to my first job as a Sub Editor at the Times of India, New Delhi, was through a course in Business Journalism at the Times Centre for Media Studies. Within a year, in 1994, I moved to The Economic Times as a reporter, at a time when the winds of liberalisation were beginning to make a deep impact on both businesses and governments. With so much happening at the corporate and policy levels, it was one of the most exciting times to document change.

My first big break in a leadership role came in 2001, when my Editor offered me the responsibility of leading the Ahmedabad edition of The Economic Times. It was a huge change – both in terms of the nature of the job as well as the city – and very satisfying too. My move to Ahmedabad coincided with Mr Narendra Modi coming to power as the Gujarat Chief Minister. I had a few opportunities to interview and understand the mind of the man, who would be Prime Minister just over a decade later.

The Ahmedabad stint also offered me key management lessons in terms of the importance of change, the benefits of disruption in professional and personal development, and the role of empathy in managing teams.

I came back to Delhi after a couple of years and took over as Corporate Features Editor and then as Editor of The Sunday Economic Times – both learning and enjoying the art of long-form journalism. Six years later, the love for news led to the next big change in my career as I moved to Mumbai as the National Head of Business for The Times of India.

RT: How did the transition from journalism to corporate communication happen?

SM: Despite always being rooted in change – both in terms of geography as well as the nature of work – the biggest change in my career happened in 2016 when I decided it was time to disrupt myself and begin to learn again. Post some deep introspection, I finally quit journalism after over two decades in the profession to pivot to a Marketing Head role at Bain & Company India, a responsibility that included leading Corporate Communication and Content. Though the common thread was storytelling, the learning curve was steep and what helped me in creating impact included an inspiring leadership and an enthusiastic and supportive team.

RT: How has your journey at Bain & Company India been, since the time you joined?

SM: My journey at Bain & Company India has been most satisfying and enriching, and continues to be so. Bain is not just a great place to work but is also a huge learning ground. The culture of the firm speaks for itself – Bain has been at the number two position on Glassdoor’s ‘Best Places to Work’ list, and has maintained a spot in the top four on this global list for the last 12 years. And this is rooted in a unique collaborative culture. What’s encouraging is the leadership’s emphasis on innovation, appreciation for results, learning and development, of course, the underlined theme of having fun at work.

Bain also invests heavily in professional growth and training. There is a built-in institutional framework for ideas exchange, experience sharing, and learning at two annual global events – The Global Marketing Meeting and the Asia-Pacific Marketing Meeting, where global leaders of the firm across Marketing, Public Relations and Editorial converge and brainstorm on priorities and fresh ideas.

This enabled me to adopt a few industry best practices as well as learn how differently each market was responding to developing issues. Separately, I also traveled to Davos to attend the World Economic Forum to support the leadership team across platforms such as media interviews, events and byline articles – an opportunity which provided a great learning experience of operating at the global level.

RT: Your role currently involves editorial and marketing. How do you bring about a balance?

SM: My role involves editorial, corporate communication and marketing – what binds all of these together seamlessly is storytelling. In B2B firms, it’s no longer about doing these in separate silos. Every campaign, roadshow, industry report and event needs to be closely coordinated and only when all the three functions kick in together seamlessly, it provides visibility and impact.

Let me share an example of a report – Future of Consumption – which we did with the World Economic Forum (WEF). It sparked off many conversations at Davos during 2019. It was covered widely in the media, continues to be quoted even now, and is an archetype of great content marketing. It was amplified through byline articles in the media, blogs on the WEF website, videos, posts on social media, our own website, besides being shared widely with clients – generating a lot of discussions. It also offered a great branding opportunity for Bain as findings of the report were presented at various industry events, including at WEF Davos and at closed-door Bain-hosted CEO events. It’s therefore important to visualize a campaign holistically.

I served as a jury member at one of the leading PR and Corporate Communications Awards recently and I was not surprised to notice that the lines segregating advertising, marketing, public relations and branding are fast blurring across campaigns, as all of these work towards the goal of enhancing reputation and business growth.

RT: Name two PR campaigns from any brand that have stood out for you.

SM: I was quite impressed by a PR campaign from the Confederation of ATM Industry (CATMi). Since the RBI wasn’t taking note of its problems of low ATM fees, it ran a campaign through Adfactors PR to make authorities take note of their point of view. The press release, which was picked up extensively by the media, cried ‘50% of ATMs set to shut shop’. This resulted in hundreds of stories with many on the front pages as also an Op-Ed article. I’m told it influenced the RBI to set up a committee to go deeper into the issue.

I also quite liked what Discovery did with the Man vs Wild Show featuring Bear Grylls, last year. It managed to get Prime Minister Narendra Modi on the show, without having to pay any celebrity fees, and milked benefits for brand Discovery and the resultant PR emanating from the announcement across TV, print and digital. The show itself had over 3 million impressions. Besides, it was a win-win for all. The episode was considered a global coup for Brand Modi, who was featured exploring the wilds of the Corbett National Park with Bear Grylls.

RT: We see a lot of senior editorial team members moving to corporate communications. What is the reason for this trend?

SM: You are right and I see this trend only growing, especially for business journalists. Their contribution is valuable as it sits upon the triad of a deep understanding of the media, business and the economic landscape, relationships across the ecosystem, and great storytelling skills. Given their training and experience, they also have the uncanny ability to quickly understand concepts, simplify messaging, and perform in any setting. Besides, working on strict daily deadlines and routinely reporting on various crises prepares them to efficiently handle contingencies. In fact, we could see the trend gaining ground as Covid-19 threatens to significantly disrupt the media.

RT: What tips would you give a professional, who wants to switch from journalism to corporate communications?

SM: First, learning should be a constant in whatever we pick up – as also passion, performance and purpose. If we can align all of these, any change can be enjoyable once one grows out of the initial period of discomfort and disruption. Remember, in every change, it’s critical to shed the baggage of the past and then unlearn, learn and relearn.

Second, if one is going to lead a team, practicing empathy, empowering and adopting a collaborative approach for achieving results is extremely important.

Third, remember the basics for any job remain the same – integrity, perseverance and results – only the approach changes with the nature of the job. A Harvard Business Review article, I read recently, also offers an intuitive smart hack: To be seen as competent, one also needs to come across as confident and optimistic.

RT: What do you do for leisure?

SM: It’s a combination of different things at different points of time – from sports like swimming, cricket and table tennis to reading and meditation. It enables me to recharge and keep fit. I also enjoy driving holidays and exploring historical places across the world with family and friends. With the lockdown, forced by Covid-19, right now I’m learning Yoga for the first time in my life. I can confirm that though some asanas make me uncomfortable, Yoga is teaching me to live and breathe right, something critical in our hard-wired and hard-pressed daily lives.

Be the first to comment on "In Conversation with Shubham Mukherjee"

Lord of the Brand – Fellowship of the Regions