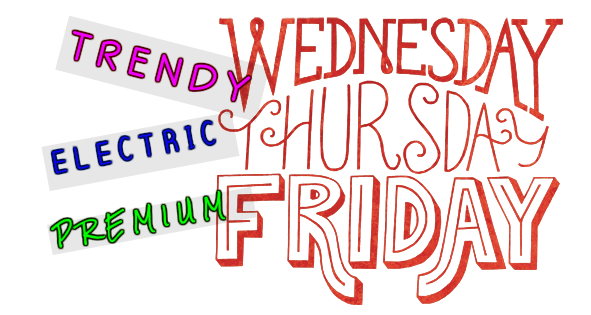 What can retailers do to engage customers? Lots, as it’s pretty obvious today. The real challenge for marketers, is engaging shoppers while their behaviour rapidly evolves. Shoppers today, are more tech-savvy and price-sensitive than ever before. A fact that struck me recently, as my attention got pulled to a flow of messages in my mobile. In December, it was Myntra announcing Trendy Wednesdays, (saying, get flat 15% cashback with ICICI Cards or Pockets Card), promising to make your Wednesdays a trendy one. Then another round of messages from ICICI decided to engage us on Thursdays too, throwing the ring out to us saying “Go digital on Electric Thursdays”.

As far as I can remember, Wednesdays so far, was lauded over by Big Bazaar, with their weekly savings on “Sab se Saste din”. What started off in 2006 as a single day campaign has now snowballed to become a much awaited, exciting annual shopping festival for consumers to choose and grab great products at great prices. The annual Big Bazaar Sabse Saste sale was announced from 21st-26th January, offering a host of products, packing in a bonanza offer for each and every one in the family. We know that every year, Big Bazaar celebrates Republic Day with a shopping extravaganza. And, we would recall seeing shoppers trouping into their outlets, trying to grab deals they cannot resist! Incidentally, in its twelfth year, Big Bazaar’s ‘Sabse Saste 6 Din’ also introduced some a new angle, so  they had ‘Ab Aur Bhi Sasta’ promise, to spell out greater value for its customers.

Incidentally, a blue and yellow graphic has been flashing on my mobile for the last few days, informing me about the Flipkart Electronic Sale to take off from 22nd to 24th  March, again with exciting offers and huge discounts on mobiles, TVs, laptops, air conditioners, and more. An added attraction is its special ‘Crazy Deals’. I know people who were waiting for the clock to strike the midnight hour on 22nd, so that they could click in and grab some envious deals, that would definitely lead to a situation that showcased “neighbour’s envy, owners pride”!

At one end, there is a celebration of sales and at the other end, in the far east corner of the globe, Japan the country known to have a high suicide rate, is going all out to orchestrate positive mood swings! Japan wants workers to clock out early on what they have coined – ‘Premium Fridays’. To add credibility to this cause, Japan’s Prime Minister spent the launch Friday afternoon meditating, while employees at some of the country’s biggest firms quit work early – just in time for “a bit of shopping or maybe a boozy train ride”, as reports depicted.

So, it was indeed, a huge welcome to Premium Friday. Needless to say, it was Japan’s latest bid to tackle two perennial problems – sluggish consumer spending and infamously long working hours, which is actually blamed for a national health crisis known as ‘karoshi’, or death from overwork. This new work-life balance scheme, was actually a wake-up call for employers to make the lives of their employees happier. The Japanese government and business organisations are apparently trying to encourage workers to leave by 3 pm on the last Friday of each month.

The ‘Premium Friday’ campaign was launched on February 24th this year (2017), taking inspiration from consumer events such as ‘Black Friday’ in the US. Through such an activity,  it is envisaged that Japan’s slipping consumption figures could get a shot in the arm, if people use the extra free time earned, to go on a shopping spree or eat out.

Meanwhile, there was action all around focused on creating enjoyable leisure time. This initiative is backed by companies, shopping districts and municipalities and cities restaurants would throw open its doors early on Fridays – to attract people trooping out from work. If anyone has travel top-of-mind, then Japan Airlines planned to operate tours that run from Friday evening through Saturday and Sunday. Happy times for the Japanese, for sure! An official logo also debuted as part of the promotional campaign. We keep hearing that Japan, with so much going for it, is not a happy country, but here is a sure-shot attempt at spreading good times!

Be the first to comment on "Trendy Wednesdays, Electric Thursdays & Premium Fridays"

Tricks to translate techspeak into plainspeak and wow your audience