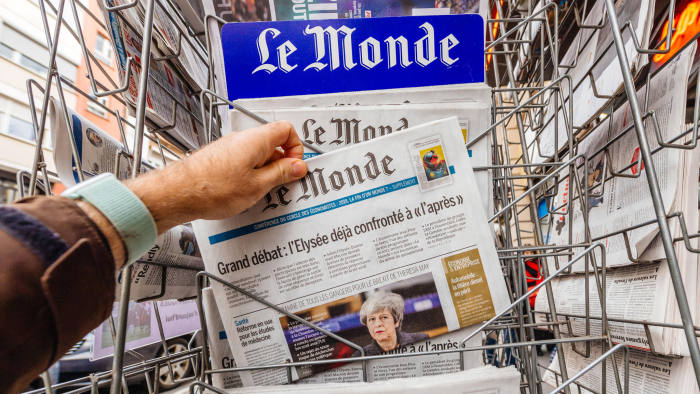 Journalism is a tricky business, especially for those who run the business side of it. Journalists are supposed to be editorially independent for news to be unbiased, and therefore, unjustified intervention by what is broadly referred to as “management” (in effect, owners) is looked down upon. At the same time, the best and the most upright of journalists need to be paid and their travel and research expenses have to be funded. The owner/publisher’s job, I sometimes think, is tougher than that of the journalist. Especially if you are a publisher who believes in credible journalism. It is easy to view journalism as a “content” business to aggregate audiences based on consumer focus. It is more challenging to shape public interest journalism with a sense of ethics.

All these thoughts come to me in the backdrop of a power struggle in one of the world’s most respected newspapers, ‘Le Monde.’ The flagship of Parisian intellectuals, the left-leaning paper ranks alongside The Guardian from Britain and New York Times among bastions of old-world journalism.

This month, journalists from Le Monde signed an open letter in which they warned readers of a threat to their editorial independence.  In 2010, the paper was acquired by three private investors, a telecom tycoon, a former banker and an industrialist. The banker, Matthieu Pigasse, later sold his shares to Czech industrialist without minority shareholders including journalists, readers and founders being informed.

Journalists now want their owners to guarantee editorial independence — including a power to decide on controlling stakes in the company. Leading shareholder and Czech energy baron Daniel Kretinsky (whose name should invoke chuckles in newsrooms) is in no mood to sign an “approval agreement” calling it “economically unreasonable.”

It gets tricky here. Journalists lose their independence if they do not set limits. Their livelihoods, however, are threatened if barons run roughshod over their views.  News organisations are called “stooges” or “chamchas” if they follow ruling dispensations or governments, and described as “sellouts” if they bend towards big business (which often has the deep pockets to buy ad space and air time, if not media houses altogether).

What we need, in my opinion, are complex but viable corporate structures for news organisations that have a public character. I have been thinking a lot about this, and do have some ideas to take this further.

In the absence of accountable structures, we need enlightened media barons. I dare say some barons are underrated because how they walk the tightrope between journalists, corporate bigwigs, politicians and bureaucrats is rarely in public view.

Somehow, I seem to like (thus far), the kind of clarity exuded by Amazon founder Jeff Bezos, who now owns The Washington Post in his private capacity but seems to let the journalists do their jobs — though I can’t be too sure of anything.  Independent reports on how he has run the Post are encouraging.

Not seeming to need the power or the money from the media business, Bezos has left the Post to pursue journalistic excellence. But journalists there are not without their dilemmas. Earlier this year, when Bezos filed for an expensive and high-profile divorce from his longtime wife MacKenzie,  a Vanity Fair columnist mused about how the Post journalists do not ordinarily cover “tabloid-style” divorces but also did not want to be seen ignoring a story about their owner. No less than President Donald Trump tweeted to say that NYT covered the story better (not least because the Post stories often show the Prez in a poor light!).

The celebrated publication did cover the divorce with a straight face in a matter-of-fact way not forgetting to mention that Bezos owns the company that published the report.

Where does all that leave us? I personally believe carefully crafted policies and ownership structures are the way out, but getting there is a huge task. Who wants to invest in something that gives them neither profit, nor power? My answer would be: ordinary citizens who understand the significance of credible journalism. Some of my ideas on ownership are centred around that.

Diversity, Equity And Inclusion: Getting Real

How to communicate Crisis?