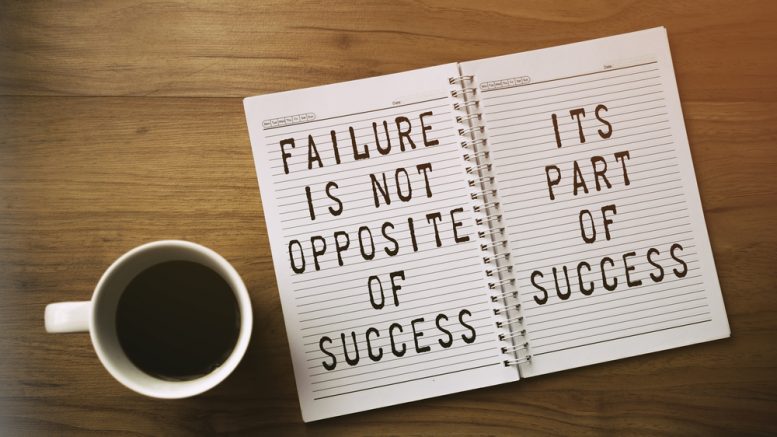 One of the biggest lessons I’ve learnt as an entrepreneur in the last ten years is that the ability to accept failure and move on quickly is the most crucial success factor.

Looking back on an entrepreneurial career of ten years, it occurs to me that we have failed more than we thought we would, and also made more mistakes than we ever intended to. In retrospect I now know that failure is more inevitable than success and is still acknowledged and talked about much less, except when it is to criticise the failed action. We celebrate success at every juncture, however big or small. But rarely do we recognise how much failure teaches us. After all, it is because we have failed that we can learn from our mistakes and succeed eventually. The key is to avoid repetition of these mistakes.

While it is certainly important to have your eyes on the prize, chasing success with no compassion towards yourself or anyone else, will in fact hinder you from achieving higher. If you’re too harsh on yourself when you slip and fall, you might never be able to get up.

Failure can make you extraordinary

Founded in 1939 as Timely Comics, Marvel Comics went on to become a household name, even overtaking their giant rival DC Comics at one point. However, in 1987 they were again overtaken by DC Comics and in the following years, the enterprise was bought out, put on the stock market and was witness to a steady decline. But all this changed when in 2005, Marvel struck a deal with Merrill Lynch to start producing movies. In 2007, Kevin Feige joined, and the birth of the Marvel Cinematic Universe began in 2008 with Iron Man that saw astounding success.

Following a 9-year slump, Marvel persisted and innovated to make it through against all odds. Collaborating with the right people, hiring a mastermind team, and repurposing decades of comic content for the silver screen – these were all moves that went beyond what was expected. In such situations of failure, confining oneself to a job role is not advisable. Instead, the media and entertainment industry in particular needs problem solvers who will go beyond it all. I read somewhere, just the other day, that the difference between “ordinary” and “extraordinary” is that little “extra”. And I think we should all learn to embrace the “extra” in each one of us.

Failure can make you resilient

People often give up too soon, little realising that they are so close to success. Grit is very important in the professional world, especially in the public domain of PR, marketing, advertising and entertainment. As clients and consumers evolve, the market is only going to get increasingly demanding. Your customers may not always like what you do, and the key is to learn from them and consequently provide what they do like. There’s no use getting disheartened with by criticism or the failure of a product or service. These are occupational hazards.

A great example of a brand that tried, failed and tried yet again only to succeed is Netflix. In 2011, when the company decided to split its streaming service from its DVD service, they lost 800,000 customers as a result. Subscribers were furious, and Netflix did the best thing they could do at that point. They listened to the consumer. Scrapping the plan to split, and two years later, launching their first original production, House of Cards, Netflix came back to the forefront, and is currently at the pinnacle of OTT success. Apologising and acknowledging discontent is the first step. Acting on it is the second. And going beyond it all to provide good quality fresh content, is the third. Netflix did all of this, only because the leaders along with their team, had the wonderful ability to bounce back.

What is success? And what brings it on? While I strongly believe that it’s imperative to hire the right set of people who align with the organisational values, I also do realise that much of the onus falls on the leader. And here, it becomes important that leaders do not fall into a state of inertia, but rather constantly push themselves to do tasks and functions that you don’t fundamentally enjoy doing. Whether it’s crunching numbers or getting into hardcore sales, everyone has those particular tasks that they just don’t want to do. But pushing myself to do exactly these necessary functions made me gradually realise their importance on the road to success. And this in turn actually made me enjoy them more!

That, for me, is the ultimate journey from failure to success, from dissatisfaction to delight. That is the real push. When you start off somewhere you’d rather not be, know that persisting through it all will take you exactly where you do want to be.

The communications function in the corporate value chain