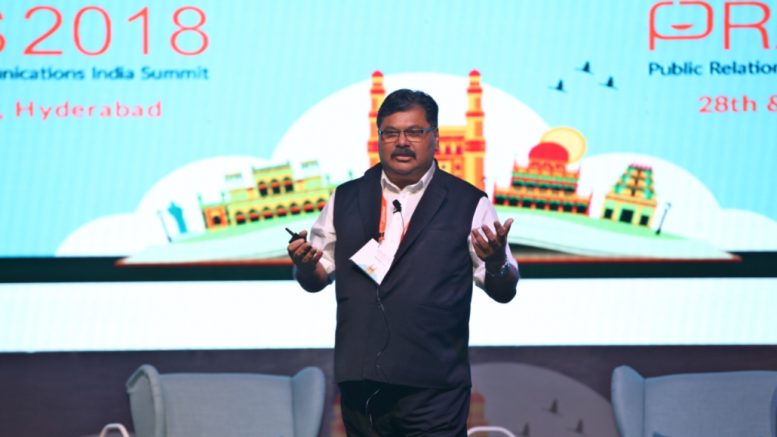 Contributing to sustainability, is a subject that shaped ITC, says Nazeeb Arif, Executive Vice President – Corporate Communications, ITC Limited, “It is the only company in the world to be carbon, water and solid waste recycling positive for over a decade”.

Taking sustainability very seriously, he admitted that indeed, sustainability is at the core of ITC’s corporate strategy. More than two decades ago, when Mr. Y. C. Deveshwar took over as Chairman of ITC Limited, ITC redefined its vision to make societal value creation a primary purpose of business. This focus on sustainable value creation emerged from the needs to respond to some of the formidable challenges confronting the world, and more so developing countries like India.

Unfortunately, the growth model followed by nations across the globe paid little heed to the widening income inequities and widespread environmental degradation – threatening the future of the planet and its people. Even today, some studies point out that the wealth of only eight people in the world equal that of 3.5 billion people, who are at the bottom of the pyramid. And, it is well recognised that climate change is here and now, impacting habitations and future growth. The growth in world population, urbanisation and use of resources do not match the capacity of the earth to replenish such resources. Today, it is estimated that to meet the demands from the rising population, global crop production needs to double by 2050. As per National Geographic, the planet must produce more food in the next four decades than all farmers in history have harvested over the past 8,000 years. India mirrors most of the global sustainability challenges.

It was against this backdrop that ITC crafted a vision to contribute simultaneously to replenishing the environment and creating sustainable livelihoods, apart from creating a competitive portfolio of businesses. Besides, the ITC leadership also believes that the innovative capacity, creative capability and entrepreneurial vitality, that businesses employ to create winning brands and businesses – can be leveraged effectively to create larger societal value.

Aligning business models and outcomes to national priorities is at the heart of ITC’s credo of “Putting India First”, which is manifested in many ways in ITC’s journey. ITC’s businesses were challenged to innovate models that would not only make them internationally competitive but would simultaneously build environmental and social capital. This led to the globally recognised initiatives like the e-Choupal, which has benefitted over 4 million farmers. Large scale programmes like afforestation, watershed development, sustainable agriculture, animal husbandry together with women empowerment, primary education, vocational training, health and sanitation have benefitted millions in rural India. Today, ITC’s businesses have created over 6 million sustainable livelihoods, addressing a major area of national priorities.

Spearheading environmental stewardship, ITC’s resolve to pursue a low carbon path and replenish natural resources has made it the only company in the world to be carbon, water and solid waste recycling positive for over a decade. Over 40% of the total energy consumed at ITC is from renewable sources. The company has also pioneered the green building movement in India, establishing some of the world’s highest rated LEED Platinum certified green buildings.

He narrated the first story on ITC’s attempt at greening – when they got into wasteland conversion, and “leveraged trees in the wasteland to the tune of greening over 6.80,000 acres”. One third of the world’s population lives here in India, hence the need of create jobs too, he pointed out. They have empowered over 60,000 rural women entrepreneurs too. Thus ITC is “thinking sustainability” at every point of time. The ITC Green Centre at Gurgaon, was visited by Hillary Clinton, who also had positive things to say.

In a conversation with Minal D’Rozario, Co-Founder and Director – Ideosphere Consulting, the topic of our PM’s reference to eliminate plastic was raised, to which Nazeeb replied saying, “It’s a far-sighted view.” But, then he went on to state that “India is the only country where 60% of the plastic is recycled!” A fact that definitely many of us are not aware of. But with the company’s marching strides in this direction, the greening initiative will take leaps and bounds, a point that he endorsed.

The R word and the why of it!