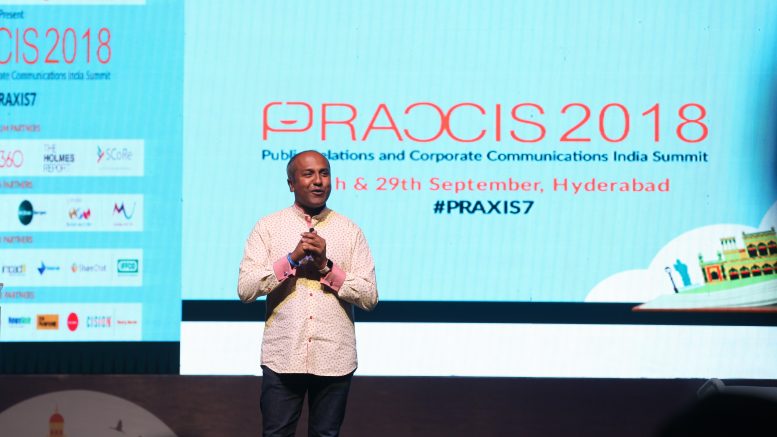 Where does storytelling fit in to this new world of technology and how can people explore these new opportunities? We got the lowdown from Sree Sreenivasan, Digital & Social Media Strategist & Consultant and Co-founder, Digimentors as he expanded on – “Storytelling in the Age of Digital”.

Having mastered the “connecting act” as it were, he has been credited with having created The Metropolitan Museum of Art’s first app, which won him accolades. This was when he was Chief Digital Officer there.

Starting on a philosophical note, Sree noted that “Life happens” and that “adversity builds character”. He went on to recall how the worst moment in his life became the best, which was when he lost two jobs in two months! When he was leaving the Metropolitan Museum of Art, at New York, his tweet and posts gained him followers and a fantastic response too. His post on Instagram said: “Today is my last day at The Met, the end of Sree 2.0 and three magical years”. The impact looked like in one scoop, he had taken a stressful experience, and had spun it around into an opportunity!

In other words, the story caught on. He had managed to make his departure look, quite literally, like the opening up of a new road to the future. Most significantly, the story of how he pulled off turning a public firing into a masterpiece of personal branding really establishes his uniqueness. An early adopter of social media, his advice was – “Build your network before you need it”.

Today, in this rapidly changing content and industry landscape, story and imaginative storytelling becomes even more important. To create effective work in this space, the approach is critical. And, if done right, extraordinary things will happen and today, story-led work has perhaps the most potential to break new ground. Always be charging, always be connecting, always be collecting, was his advice.

“Being clever”, is very important especially as far as magazine covers go, for cleverness is useful in the magazine world. He pointed out in the Twitter world, in the digital world -“clear” is the new “clever”, for you should give people a reason not to unfollow you.

Ultimately it’s all about how you tell a story. And one must remember that visuals rule, so the attempt should be to create “#thumstoppers”!

In the digital era, the audience has changed. It now has higher expectations, more demands, he felt. People are very keen to connect and interact in different ways. They want more information, at a quick pace, in a timely fashion. And diversity counts.

In the digital world, he touched on the Facebook legacy contact, and observed that LinkedIn is the most under-appreciated of all social networks.

Three qualities that the best of communicators, should have are: confidence, transparency and generosity. Going on to the three attributes for the creating the best digital projects are: it should be simple, useful and completely delightful. And what can social media do for you? It can find new ideas, trends, opportunities; it can connect with audiences in deeper ways; it can bring eyeballs/traffic/attention to your work and it can help create, craft and enhance your brands.

In conversation with Resham Chhabra, Head-Communications, NestAway Technologies, he emphasised the fact that communicators should control the narrative by setting it free. For successful storytelling, his point was – playing in the space will pay off.

What’s next for digital story telling? It’s evolving and ultimately, we need to keep trying new things, but we must try them together in an open and exploratory way. And, we have what is his unique offering, what he calls #SreeTips” to journalists on using social media via Facebook, Tumblr, and so on. Spelling out his social media success formulas which are: be helpful, useful, timely, informative, relevant, practical, actionable, authentic, generous, credible, brief, entertaining, fun and occasionally funny. Now, the ball is in your court!

Deal or no deal? The difficult boss conundrum

Leadership lessons I learnt as a bored intern

PR vs the Media: What’s the buzz?