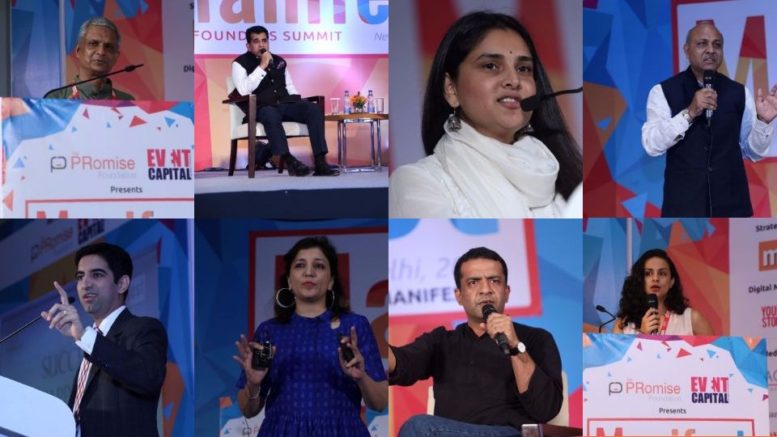 Yogesh Chabria, Founder, The Happionaire Way spoke on “The Secret Teachings of the Goddess of Wealth and Goddess of Knowledge”. Acknowledging all the entrepreneurs in the room, he spelt out some teachings: never fear, observe (the more we observe, the more benefits we get), listen (to learn more), invest in knowledge, have clear goals, value time and lastly – be happy!
Manifest was indeed a celebration time with founders coming together for knowledge and experience sharing. A point that Amitabh Kant, CEO, Niti Aayog did not miss out on, as he spoke on “Espousing Innovation and the Need to Celebrate Founders”. To lift India from the poverty line, he stressed, we need to grow at 9 – 10% per annum instead of the current 7.5%. This requires clarity of vision and policy initiatives. India has made itself a complicated place to do business and the regime of control has to be dismantled to grow. “In the last two years we have tried to do this and the trend must continue,” he pointed out. We opened up FDI regime, which has grown by 53% (against a 16% fall globally) and today India has become the No 1 destination for FDI. He emphasised that urbanization has to be a critical driver of growth. By 2050, 700 million individuals will move to Indian cities, and India has to be innovative and sustainable. Infrastructure is critical and India’s spends on infrastructure have grown by 30%. He also discussed how India is becoming a centre for global innovation. There is vibrancy and innovation in the start-up movement and it needs to be given a fillip, he urged.
In conversation with Anil Padmanabhan, Executive Editor, Mint, Kant pointed out that the government must facilitate ways for businesses to flourish. “Disruption is happening and we have to keep pace with changes for India to grow,” he said.
The Power Exchange on Social Impact was moderated by Vikram Sampath, Founder, Archive of Indian music. The discussion involved Shankar Srinivasan, Founder, Inclov, Deepak Goel, Founder, Karmacircles, Kanika Pal, Founder, SOCHE Foundation and Surabhi HR, Founder, Political Quotient. About talent management, Srinivasan was quick to assert that “you need to have a powerful story”. To ensure that the next generation goes forward, Surabhi brought up three mantras – disruptive leadership, institutional change and measurable outcome. For the ecosystem to evolve, Kanika’s advise was “to listen”.
“Are new-age Founders braver than corporate India? Can they drive change via diversity?” was the centre of the talk give by Aparna Jain, Founder, Zebraa Works. Is diversity in your DNA, she questioned. She discussed gender diversity, double standards, body imagery, objectification, victim blaming and even the wage gap which was 27% in corporate India.
Vivek Law, Founder, Investonomix was the moderator of the Power Exchange on Money and Fintech 2. Calling himself a “late bloomer” he discussed the needs these founders were fulfilling, how much of scale they have seen and what is the potential. The speakers – Vikas Sekri, Founder, CashCare, Nidhi Gurnani, Founder, CardBack and Pranav Manpuria, Founder, CocoaPay each gave their take on this.
Food was the focus of the Power Exchange which was moderated by Rajyashree Sen, Founder, Food for Thought. Maulik Mistry, Founder, Mojo Bars, Rajeshree Naik, Founder, India Food Network, Vikram Achanta, Founder, Tulleeho, Pragati Sawhney, Founder, Chockriti and Ashish Kapur, Founder, Moods Hospitality discussed their area of food, whether people took start-ups seriously and some tips for the business. “Food is a 60 minute vocation,” said Ashish Kapur.
“We are all start-ups when we are born,” said Tathagata Satpathy, MP and Founder, Orissa Post when he spoke on “The importance of Respecting Privacy in a Complex World”, and said on a philosophical note – “any work that is thrilling is which you can excel in”. Democracy is like a deo, it allows us to think differently, it’s a mindset. Recalling the time when he stated in the Parliament that Aadhaar should infringe gradually on our privacy, he noted “I believe we Indians undervalue privacy”. Divya Spandana, Former MP and Kannada actor spoke on “Following your Heart and standing for a Cause”. She endorsed, Follow your heart, and you cannot be wrong!
The Power Exchange on EduTech had Gaurav Yadav, Founder, Eduace, Phalgun Kompalli, Founder, Upgrad, Rajashree Krishnaswamy, Founder, Catalyze Centre for Learning and Maruti Konduri, Founder, Cracku in a discussion, which was moderated by Syed Sultan, Founder LXIdeas. They discussed challenges, how they differentiated themselves, and even their take as visionaries.
“Building Value Using the Power of Values”, was the topic of the address given by Anshu Gupta, Founder, Goonj. “Pay back to nature in a currency called ‘labour’” and “logistics in India is equal to corruption” were some points he touched on. “We don’t listen. The time has come to listen,” he emphasised.
Ramesh Agarwal, Founder, Agarwal Packers & Movers exclaimed when an entrepreneur accepts innovation, nothing can go wrong!
The finale saw the glamour quotient shooting up, as Gul Panag, Co-Founder, Mobiefit took centre-stage as she spoke on “Action, Activism and Activity”. She indicated that the need of the hour is to find the space which allows you to do your best, dream and make it a reality; nothing worth having is easy. As Founders, she said that we have important roles to play by doing our bit. We all have our circles of influence and we must use it to bridge the gap. “Keep your eyes on the bigger picture. Keep going, keep doing great stuff” was her parting shot.

Be the first to comment on "Manifest 16: A Founders’ Rendezvous Part 2"