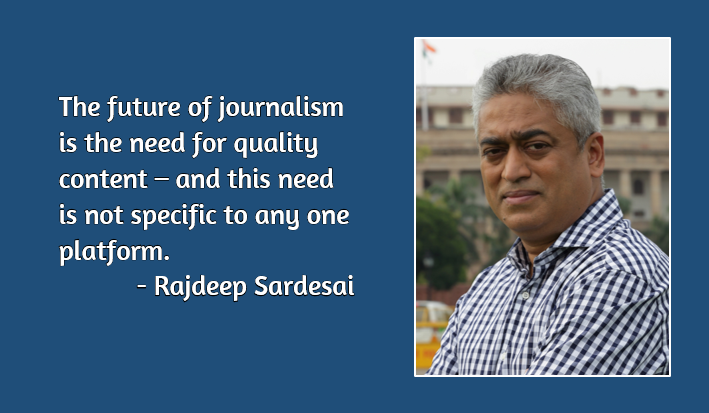 Rajdeep Sardesai is a senior journalist and author of the best-selling book, ‘2014: The Election that Changed India’. With 28 years of journalistic experience in print and TV, Rajdeep was Managing Editor of both NDTV 24X7 and NDTV India. He was the Founder Editor of the IBN Network 18 which included CNN IBN, IBN 7 and IBN Lokmat. Currently Rajdeep is the Consulting Editor of the India Today group.

In conversation with Shree Lahiri, he elaborates on the role of the journalist, on taking sides, the social media and more.

RT: The role of the journalist has evolved today, how important is reputation for journalists today?

RT: This refers to a comment you had made once, that journalists are not under threat from the gun alone. So, do you think that is the scene today or has the threat scene increased for journalists?

RS: I am among those who believe a journalist in the end is only as free as he or she wants to be. You know, we still live in a remarkably free country so I believe that journalists, don’t need to be intimidated. It’s just that today there are continuously increasing business and political pressures but, let’s not exaggerate and suggest that they have destroyed their soul. So, I think journalism and the soul of journalism has been destroyed by journalists themselves and not by external factors.

RT: Today journalists have an opinion – is it possible for them not to take sides?

RT: Taking to social media & twitter – trending in twitter does manage to influence even news rooms today. Do you think media tends to focus on such news?

RT: Regarding trolling – it’s a totally new experience today to get trolled. Everyone, including celebrities get trolled today, but at the same time, it does give a voice to people to vent to their ideas and thoughts. What is your take on this?

RS: My own belief is that social media is sadly being misused, when people use anonymity to abuse others. I have no problem with people expressing their opinions. The strength of social media is that it democratises opinion; everyone can air their views. But, if you use the platform for abuse or for running character assassination campaigns, then I have a problem with that kind of a campaign, that kind of behaviour.

RT: How have PR professionals evolved in the last three decades, as you see it, from a journalist’s point of view?

RT: With a race for viewership and TRPs today, what do you think are the chances of survival of quality TV journalism today?

RS: I think that the space for quality TV journalism is shrinking because of TRP pressures, because of the business model of television. I think we’ve become breaking news channels which often thrive on sensationalism, rather than sense. The space sadly is shrinking, but that doesn’t mean that we don’t try to preserve it, even if it’s a small space, it should be preserved.

RT: What is the future of journalism?

RS: I think the future of journalism is the need for quality content. But, it will not be specific to any one platform. We are in the era of multimedia, where you are platform agnostic – you could be on digital, TV, web and print. Content will always survive but what I fear is that everyone is now used to the idea of getting information without paying for it. So, I worry more about the business model of journalism which is under threat. Content will survive – there will always be a need for content. But, are people willing to pay for good content, is my question; because if that doesn’t happen, then the business model for journalism is under severe threat.

RT: One last word from you… with media evolving so much, any advice for aspiring journalists?

RS: My only advice for aspiring journalists will be to just believe in journalism. This is a unique profession like no other. This is not a 9 to 5 job, so please treat it as a passion not as a profession.

Be the first to comment on "Media Speak – Rajdeep Sardesai"

Work from home and the PR community dynamics