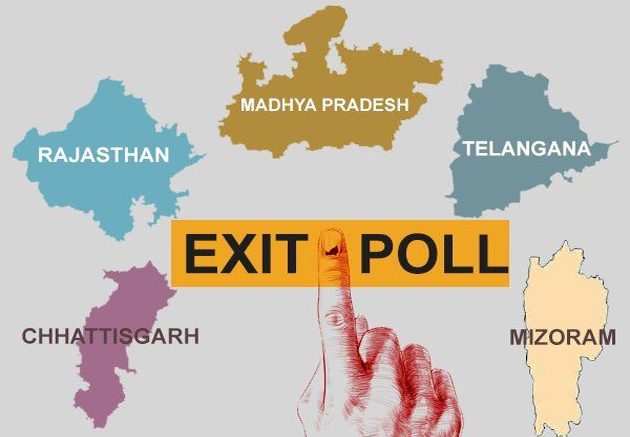 The brief period between casting of votes and the declaration of results of an election brings a cocktail of emotions. For contesting politicians, it is a nerve-racking period. Very few know the likely outcome better than them, but just one can never be too sure. For political pundits and media that hosts them, it’s a carnival. All the analyses, speculation, debating scenarios and contingencies makes for a filling and gratifying airtime. And the biggest fodder for their analyses are the Exit Polls, the findings of which are allowed to be reported after the final vote has been cast, by the Election Commission of India.

Exit polls for the five state elections were released on Friday, 7th December. These elections are being justifiably considered a trailer to the juggernaut 2019 general elections. And hence there is that much more spotlight on who will win, who will lose, and who will compromise. While we will know the reality three days from now, the better part of Friday was spent in the autopsy of the Exit Polls, with frequent proclamations of how “exit polls are always wrong”. But are they? And if they are, why spent so much time and energy in conducting and analysing them?

As it turns out, Exit Polls aren’t nearly as often wrong (or as wrong) as we think. At the very least they’re an improvement over opinion polls, which require pollsters to find representative samples, estimate their intentions and probability to vote, and superimpose it their profiles and voting booths. Naturally, they’re subject to a variety of assumptions and susceptible to errors. Exit Polls on the other hand are conducted over people who are leaving booths after casting their vote (hence the word exit), and therefore require fewer assumptions, and are relatively more accurate.

Exit polls by design contain a margin of error – they represent the number of seats won by a party as a range rather than an absolute number. More importantly, these numbers need to be contextualised appropriately in order for one to make sense out of them. Let’s look at a few contexts that need to be accounted:

The first context to be placed is voter turnout. Depending on the general sentiment and location, higher voter turnout may favour parties on one side of the spectrum. In the case of the five state elections, higher voter turnout will typically be in favour of the BJP (as has been the case for most of BJP’s contests). Rajasthan saw a higher than usual turnout of 72%, and therefore the swing is in favour of BJP. Jan Ki Baat placed BJP’s range between 83 – 103 seats in Rajasthan, and the actual result is likely to be on the higher side of that range.

Demography, specifically heterogeneity of demography can swing results in a certain favour as well. Outcomes in constituencies where voting bases are more heterogeneous are difficult to predict (urban areas are a good example). However where the electorate is divided into just a few major homogeneous groups, voter turnouts of each group can significantly swing the results in a certain favour. Moreover, we have previously written about how identity politics can play a role in voter turnout as well as preference.

For elections the ultimate question is who forms the government. In the rare event where no single party has a majority (over 50% of the seats), they may need support of other elected representatives to bring themselves upto a majority. This can drastically change the significance of exit polls. For instance, in Telangana, TRS and Congress lead and are fighting for the lead (with an estimated 50-65 and 38-52 seats, respectively), with 60 seats needed for a majority. In the possible scenario where both TRS and Congress land up near 50 seats, they will need support from other elected representatives in the state. Of the remaining 20 seats, 1/3rd are likely to be from BJP and the rest by other candidates. And under no circumstances will BJP support Congress to form the government; also having explicitly expressed openness to post-poll alliance with TRS back in August. This means that even when TRS and Congress land identical results, Congress may have a tougher time securing majority and thereby forming the government.

Got a question about the exit polls? Shoot them in the comment section or on Twitter at @HemantGaule

The Archery of Narratives