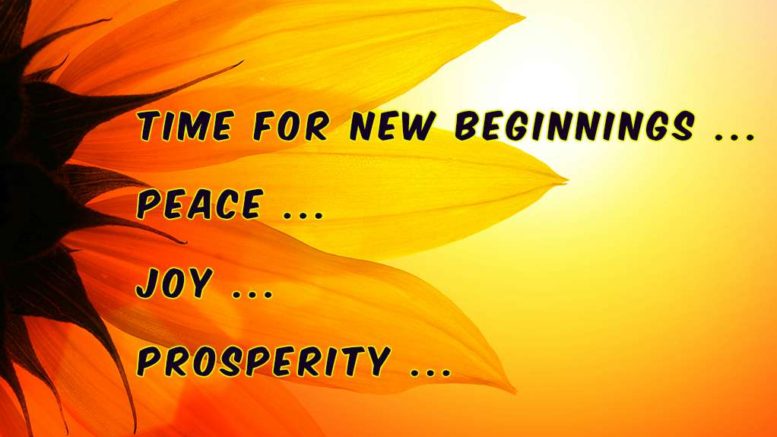 Time now for new beginnings … as India gets festive for New Year, country-wide. There was a string of New Year festivals lined up for March 28 – Chaitra Sukladi, Ugadi, Gudi Padwa, Cheti Chand, Navreh and Sajibu Cheiraoba that were celebrated in different parts of the country.

PM Narendra Modi continued his engaging ways, as he greeted people across India on this joyous occasion. “People across India are celebrating the start of the new year. New year greetings to everyone. May the year bring peace, joy & prosperity,” PM Modi tweeted.

I remember the Gudi Padwa festival in Maharashtra, which typically has all Maharashtrians totally engaged. The highlight this year was noticeably, a procession of women dressed in the ‘Nauvari’ sarees riding motorbikes, as they drove into a riot of celebrations. Other colourful photographs that popped up in the media were – women in traditional costumes playing drums, a circle of drummers, rituals being performed and, of course, the “gudi”. The symbol of the festival is the colourful “gudi”. That bright yellow cloth draped around the Gudi, is the traditional flag of victory – and an ultimate sign of faith. This is found strategically placed at all homes, openly welcoming new hopes.

For Maharashtrians, it recalls their warrior King Shivaji, who rode out to battle flourishing a saffron flag. It also celebrates the dawn of spring, which is why the leaves on the ‘gudi’ are traditionally meant to be the first bright green fresh leaves of a mango tree. The hope here, is that Nature will be kind, and the harvest plentiful. Gudi Padwa celebrates the beginning of the traditional Hindu year. The festival is also called Chaitra Shukla Pratipada – Sanksrit for the first day of the first month of the new year, known as – ‘Chaitra’. It’s also celebrated as Ugadi (Telugu) in Andhra Pradesh and Telangana, and Yugadi (Kannada) in Karnataka.

With summer setting in, you could see the Hitachi air conditioner ad in the newspapers with #GudiPadwa wishes. Blisss Bakery in Mumbai, declared on Twitter –“ It’s time to #Celebrate #gudipadwa with #Blisss and get a 10% #discount on anything you choose! #gudipadwa2017 #desserttime #BlisssCakes.

While new hope springs, here’s a chapter closing. The capital city, Delhi, is about to witness a parting with an old-world way of life. A landmark of colonial rule, the iconic movie theatre Regal Cinema, located in the heart of the city, is all set to close down. The eighty-four-year-old single-screen movie hall in Connaught place is going to down shutters by the end of this month. The hall, which opened in 1932, called “New Delhi’s premiere theater”, will turn itself into history.

But, fortunately, the story will be continued. We hear it will have another lease of life – as it will return as a modern-day multiplex. Apparently, the owners have applied for permission to open a multiplex in the heritage building. According to reports, the first and second floors of the Regal Building were sold to Madame Tussauds in 1996. It has been announced that the 23rd branch of Madame Tussauds is all set to open on two floors of the building – to create another landmark in the city.

This heritage cinemaplex has indeed lead great movements in the past – like the queer activism, way back in 1998. It was here, that filmmaker Deepa Mehta and 30 activists had held a historic candlelight vigil in defence of her film ‘Fire’. The protest at Regal Cinema became the site of the first-ever public show of solidarity for the LGBTQ community.

Regal Cinema, indeed has a great impact on Dilli-ites, as it had been the meeting point for many film buffs in the past. Suffice it to say that it will surely be engraved in the pages of cinematic history, as one of the spectacular single-screen cinema halls.

Be the first to comment on "New beginnings, new hope springs…"

It’s a six! Zomato shows journalistic presence to build ethical brand, but the shot is not risk-free

PRAXIS2022: A Special Session on the Future of Business