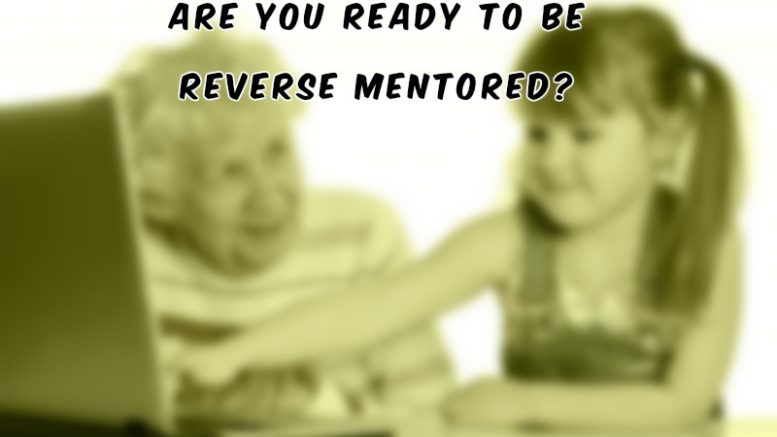 Remember the Flipkart’s ad series that features ‘kids as adults’, which actually was a huge hit! This struck me when one day in a Kolkata ‘para’ (read: ‘locality’) the early morning hours witnessed children turning up on the roadside, dressed up as comic characters Chhota Bheem and Chutki. They danced and sang, with a definite purpose – to impart lessons on traffic rules, road etiquette and safety. And, the force behind this incident? A motorcycle manufacturer, who took “reverse mentoring” to the streets.

Yes this phenomenon called “reverse mentoring” is alive in India Inc, where junior staff are lending a helping hand to enhance professional skills at the workplace, enabling senior professionals to get equipped with new technologies, and social media. This is the invention of General Electric CEO Jack Welch, who brought in younger and tech-savvy employees to teach him about the internet. He was so impressed that he later arranged for 500+ managers at GE to experience the same `mentoring’. Unilever pursued this strategy, some years ago. Other corporate giants like Dell, Procter & Gamble, Microsoft, Starbucks Coffee and Nokia have also used this technique. Marico, Airtel and Accenture adapted it to re-orient their recruitment and HR strategies and even startups like Lenskart are using this strategy.

Interestingly, reverse mentoring can be increasingly noticed in our home life too – often children advise their parents on everything – from environmental awareness to nutrition and purchase of latest gadgets (be it a mobile, car or what have you).

Adding some spice to the worklife environment, to engage employees more, some organisations are going the extra mile. There is a Japanese firm that is trying to counter stress at workplace. You may ask, how; with cats… An “office cat” policy was introduced by the Japanese IT firm Ferray, to help employees relax. Tracing the history, it seems Hidenobu Fukuda, who heads the firm, actually introduced the famous “kitty” policy in 2000, based on a request from one of his employees. Imitating this move, other Japanese companies have also allowed animals in the office – to help reduce stress and anxiety. When cats are in, why not dogs? In another company – Oracle Japan, an Old English Sheepdog named Candy works as a “healing ambassador”!

Now travelling inwards, to the personal level, let’s consider selfies – how they are involved in building brands. Apparently seen as a medium to catch attention of their audiences, many brands have evolved campaigns that use the “selfie” such as Dove (#DoveSelfie), Skybags (#BackIsTheNewFront), McDowell’s Signature (#SignatureSelfies) and so on. Cashing in on Valentine’s Day and promoting a good cause, Axe Deodorant asked fans to display their sentimental side through selfies, using the hashtag #KissForPeace.  The amazing response revealed 10,000+ tweets, and some 8,000 posts on Instagram. They even picked some favorites and shared them across social media; plus some traditional advertising was included, like digital billboards in Times Square!

Turning to celebrities to sell the ‘selfie’, is indeed, a master stroke used by some brands. Turkish Airlines hired Kobe Bryant and Lionel Messi as the faces of a #SelfieShootout contest in which fans could upload selfies for a chance to win a free flight. The campaign became one of the travel business’ most successful viral campaigns last year, with sharing happening on platforms like Facebook and Twitter, and effective integration on YouTube as well. The resounding response – 130 million+ views within two weeks, inspired the brand to create its own ‘Selfshot’ app.

We are suddenly familiar with the word #Selfiestan, as we have been exposed to the Gionee TVC that opens with Alia Bhatt clicking away with her Gionee phone. We notice how people adjust to get into the selfie. #Selfiestan” gives us a sneak-peek into how an ideal world should be like.

Considering the origins of “selfie” the word was actually named Oxford Dictionary’s 2013 Word of the Year. Then “selfie sticks” made an entry, and now we read about “selfie booths”, which are rustling up excitement. These booths, indeed, seem to be the latest way to engage customers and build a brand.

So, while brands are getting engaged with selfies more than ever before, it has thus become one of the leading digital trends today.

Mindfulness – What is it and why is it needed?