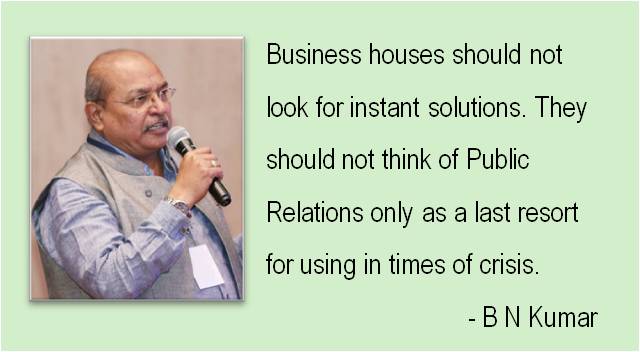 Often we come across corporates seeking quick-fix solutions to their communication problems. “Our reputation is taking a beating; we must do something quickly,” said a corporate communications lady to me the other day. “The boss wants some urgent solution.”

I could well understand her predicament. After all, her company’s glass house could be crumbling under stone attack (pun intended!).

Unfortunately, many corporates still look for PR solutions only when they are under fire. They do not invest in PR from the beginning of their businesses. If your reputation is good – that is if you have done good reputation building exercise – crisis could be a passing cloud, unless of course something terrible like a Bhopal gas tragedy occurs. The world stands by you if you enjoy a clean reputation. Even trade bodies openly support you. We have seen a recent instance of a big corporate captain coming under cloud during the coalgate scam and emerged without his shirt getting wet.

As we all know, Public Relations is all about being good, doing good and being seen as doing good. Your business has to be ethical, transparent and you should adhere to the highest principles of corporate governance (which, incidentally, all of us say in our crisis communication!). I know it is difficult to build a perception, which prompts the stake holders to say ‘that man can’t be wrong’. This is a big, big challenge for us reputation makers.

Public Relations begins from day one. Here, I would like to salute insurance companies like IDBI Federal and IndiaFirst who realised the importance of reputation building even before they started their businesses and planned step-by-step. Small wonder, today IDBI Federal has the best persistency ratio – which indicates the percentage of insurance policies in force with the company over a period. IndiaFirst has emerged as the fastest growing private insurer. These kinds of achievements do not come easy. You have to maintain good business record and credibility. Remember, trust is the most important element of financial services.

These kind of mid-level companies may not be able to match MNCs, telecom giants or major banks in terms of PR spends but they definitely pay due attention to reputation and brand building within their limited resources. PR is just not about getting media coverage; it is also about making your presence felt among your stake holders through alternative of means of communication such as grass-root sports or mass insurance.

I think it is time the communicators forget to think Uske Kapde Mere Kapdo Se Zyada Safed Kyun and start telling their bosses and clients to understand the importance of perception building as an early and long-term exercise. You may not be able to get the attention of big media instantaneously, but getting media acceptance is a slow and steady process. A particular newspaper may not enjoy huge circulation, but the editor of a big newspaper does read that so-called small publication for several reasons: to check for stories missed and look for rising stars for future recruitment. This is exactly why reporters often fight for bylines – to get visibility among those who matter – as I did as a cub reporter ages ago!

At the risk of revealing some business secrets, let me say that business houses should not look for instant solutions and not think of PR only as the last resort for using at times of crisis. Like diamonds, Public Relations is forever. The more we polish diamonds, the better they shine. And that is exactly how PR gives you a polished reputation in the long run.

One also needs to have patience and perseverance with the communication strategy since Public Relations is, as the age-old definition goes, a deliberate, planned, sustained communication.

Be the first to comment on "No quick-fix, PR is investment in future!"

Tips to build a profitable partner marketing programme in 2021

How PR is influenced by digital and social media touchpoints