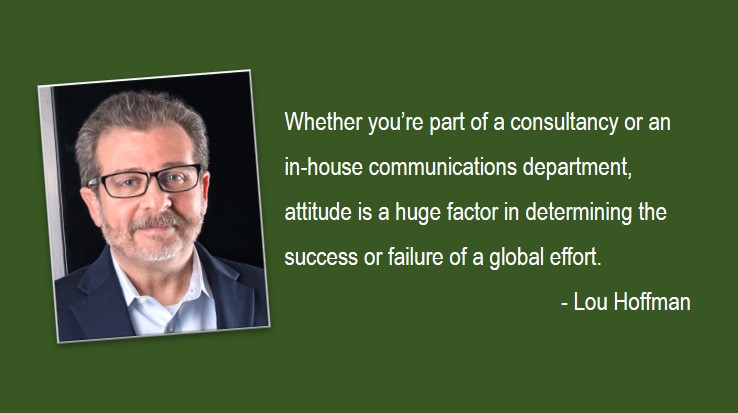 I made my first trip overseas in 1994, supporting press conferences in Tokyo, Seoul, Hong Kong, Taipei and Singapore in one week.

The experience opened my eyes to the challenges of implementing global communications. Just sharing what occurred in each press event with the rest of the team wasn’t an intuitive act. At first, I thought the issue was the use of different consultancies in each market, but as I later came to realize, several factors can impede cooperation across geographies when it comes to communication campaigns.

Shortly after that fateful trip overseas in ’94, we started building out our global infrastructure which today consists of 12 offices — we opened our doors in Taipei last week — across Asia, and the U.S. After implementing so many global campaigns over the past 20 years, I’ve noticed certain patterns emerge when things don’t go according to plan.

Executives often think that having a high profile in the domestic market guarantees a hero’s welcome when they land on foreign shores. They mistakenly expect that the perception or reputation they’ve spent years building will magically conform to local societies, adapt to local market nuances and reach out to their targeted constituencies. Unfortunately, such an attitude leads to believing that the same PR tactics and strategies that work so well in the home market can be thrown over the fence to be used in other countries. It can also lead to impatience

No. 2: Spreading Resources Too Thin

Companies often find they don’t have resources and/or budget to effectively target all the markets in a given region. For example, a company might be focusing on the UK, Germany, France and Italy, but the PR budget is modest. Instead of doing a good job in two of the markets, they spread their resources too thinly across the four target countries and don’t move the needle anywhere.

Often, the funding for a PR programmme overseas comes out of the HQ’s coffers. It stands to reason that the HQ executive would want some involvement in the international PR activities and how the money is spent. Makes sense. But when the corporate HQ exercises strict control and approval over every overseas action, an incredible bureaucracy takes hold that handicaps the international PR effort. Just the simple task of approving a news release can turn into a nightmarish saga as inputs ping-pong between HQ and the country office, exhausting everyone’s time.

Localising content goes far beyond the translation of materials. Look at the daily newspapers from India, Japan and the U.S. on any given day. The headlines will be different. Naturally, the business issues vary from country to country. Yet most companies aren’t willing to put in the time to localise the storytelling for each target country. The more effort a company puts into shaping the content to the specific characteristics of a particular market, the stronger the story becomes for the targeted audience.

No. 5: Treating Translation of Press Materials as an Administrative Task

A PR activity’s efforts can go down the drain if the translation of the press materials is not handled accurately. Years ago, we had a client situation in Korea in which the Korean word for merger was used instead of the Korean word for partnership. The client company was publicly traded, and all “heck” broke loose when the release went out incorrectly announcing a merger with a Korean company.

A company enjoys a high profile and substantial market share in its home market, so it automatically expects to receive the same type of profile in a foreign market. The reality is that the media doesn’t know the company or knows very little about it. Like any “new kid on the block,” the company needs to build its reputation through hard work and establishing new relationships.

Some companies consider flinging their news releases into foreign countries via news release distribution services as a form of international PR. Others purchase directories that list the local media — and in some cases, the names of publications’ reporters — in a given country. But the power of PR comes from the relationships with the local influencers, government officials and media as well as understanding the nuances of the local market. This can only be achieved with local feet on the street.

No. 8: Lack of Spokespeople

Often, companies operate what amounts to a sales office in an overseas market. The top executive in such an office focuses on sales. Deploying this person as a company spokesperson can be a challenge, since he or she is rewarded based on the quarter’s sales results, not building a long-term image. And leveraging executives from outside a given country often means sacrificing local market knowledge (not to mention the language issue).

No. 9: No Actions Behind the Words

“We’re committed to the local market.” Every company targeting a foreign market says these words, but many don’t take actions to support the statement. This is a bigger issue than PR. Companies should be looking for ways to become an asset to the local community and local economy. Obviously, it’s easier to build a reputation for a company that takes these steps. Furthermore, it doesn’t have to require a large investment in money and time. Instead, it’s more a symbol of respect for the local market.

Whether you’re part of a consultancy or an in-house communications department, attitude is a huge factor in determining the success or failure of a global effort.

Do team members care what happens outside of their home base?

Do team members help colleagues around the world?

Like any part of business, it’s important to align the reward system with the desired actions and, yes, attitude.

Otherwise, you end up with fighting silos or even fiefdoms, taking energy away from the global prize.