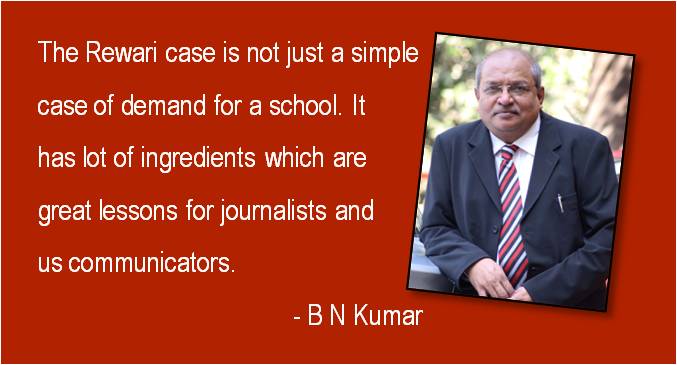 Call it the Bollywood blockbuster Dangal effect or the new awakening arising out of the Beti Bachao-Beti Padhao slogan given by Prime Minister Narendra Modi. Over 90 girls from Gothra Tappa Dahina village in Rewari district of Haryana had gone on a hunger strike and won their relentless battle for upgrading their school to senior secondary level.

During the independence movement, Mahatma Gandhi had effectively deployed the peaceful hunger strike as a weapon to a convey a message to the British rulers that Indians would not accept anything less than freedom and these Haryana girls too communicated to the authorities that they would not budge until their school was upgraded.

These girls with their sheer grit and determination managed to get media attention when the newspapers and even newly launched TV news channels were busy with scams, exposes and scoops. Scams are of course the flavour of the season, aren’t they?

It is not just a simple case of demand for upgradation of a school. It has lot of ingredients which, in my opinion, are great lessons for journalists and us communicators.

The Constitution of India to provides for free and compulsory education of all children in the age group of six to fourteen years as a Fundamental Right. However, these girls wanted to go beyond the law that makes basic education compulsory. After finishing high school, they wanted to go for senior secondary school and continue studying. For this they had to walk for four kilometers to get to the neighbouring village Kanwali for the higher school. And that walk was not as simple. Most of them trekked the distance and few had bicycles. Here came the problem. These girls had to continuously face rowdy elements teasing them and passing lewd remarks. Rowdies on motor cycles would even inappropriately touch them and vanish whistling and screaming with a feeling of victory! They would wear helmets to hide their identities.

The girls were literally hapless and some of parents would often tell them; what’s the point in complaining. It would be better if you stayed home. Jyada padh-likh kar kya haasil karna hai? (What would you achieve by studying more).

Enough is enough; they said to themselves and decided to take direct action. They obviously had no other option when the district administration was in a state of deep slumber, the ruling BJP MLA was not successful in convincing the education department and the government cared two hoots for such genuine demands.

The timing of the agitation was also strategic – the admission season has just begun.

One after the other, the media has started taking interest but it remained mostly region centric. When India Today TV and CNN NEWS 18 took up the cause at a later stage, the nation’s conscious was shaken. Nobody had to scream ‘the nation wants to know’. Haryana education minister Ram Bilas Sharma was forced to issue a notification to facilitate the higher secondary school for Gothra Thappa Dahina, which shot into limelight thanks to the girls’ agitation. 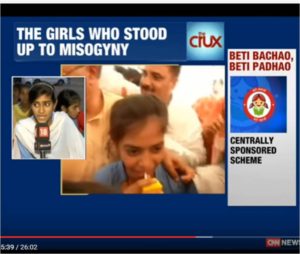 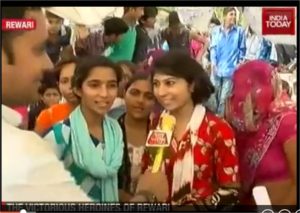 Anyone who watched the final over of this match – the handing over of the notification by Deputy Commissioner Yash Garg – would have noticed the sense of glory, tremendous satisfaction and above all the twinkle of hope among the girls that they could work towards fulfilling their dreams. One girl said on CNN NEWS 18 that she wanted to become a police officer so that she could take care of the ruffians in her area. Anubha Bhosale, who also anchors Citizen News for the channel, remarked that this school girl could even be a good reporter. Guess what the young girl told Anubha! “Maam, kuch bannay ke liya padahi zaroori hai na!” (It is important to study for whatever you want to achieve in life).

Similarly, my friend Rajdeep Sardesai was nothing short of personification of joy and satisfaction when he announced the victory of these girls.

There are many Rewaris in India and they could be looking for a platform to voice their basic needs like education, roads, toilets and drinking water. This is an opportunity for corporate communication professionals to reconsider their CSR spends and do something worthwhile with the funds in hand. It is a wakeup call for media as well to rethink developmental journalism.

Good News need not be a small filler at the end of a prime time news bulletin, Rajdeep!

He started his career with Free Press Journal in late 1970s, worked with United News of India and wrote for The Daily, Times of India, Mid-Day and Indian Express. He also ran a county paper called Newsbank New Bombay catering to the needs of Navi Mumbai before returning to mainstream by joining Business India. He started his PR career with the legendary Dhirubhai Ambani's Reliance Industries and was part of the team that set up O&M PR - the first PR arm of an Ad agency - 30 years ago and till recently, Executive Director – Concept PR.

Be the first to comment on "Lessons from Rewari girl power"

In Conversation with Vipin Nair

Trust – A virtue needed now more that ever before