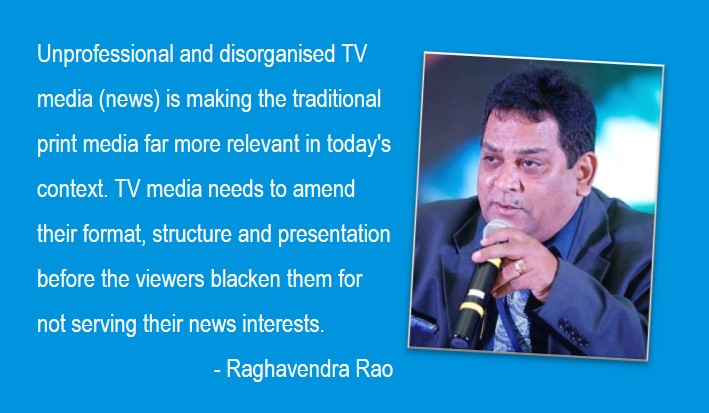 With the advent of media options in the last 15 years in India, TV media has evolved considerably. My mention is about TV news which is in utter chaos. With technology integration and up-gradation the TV media became an easy business entry option, hence we saw many of them making foray into the same. However sustained efforts have not been made to stay afloat and we see that the trend is set by an English channel, which is followed by all regional channels without getting into the pros and cons of the same. The audience has been taken for granted and there has been no effort by news channels to provide news per say.

There are many aspects of giving news but today anyone with a video camera and smartphone can be a TV journo and there are channels waiting to grab them with open hands. The large unemployment in rural India has prompted many TV news channels to appoint so called “stringers” in small towns who work as feeder network to mainline channels. They are connected to the nearest regional office who if time permits edit and air and if the news is “hot” they air it as it is with minimum chopping.

However if we notice news channels have become noisy and merely a platform for debates and discussions which ends up nowhere. In the process and there are nominated spokespersons from politics, business, healthcare, real estate, crime and many retired officers of center and state Govt and few Supreme court retired judges and many senior lawyers too. These so called celebrity speakers become brands within the network and are always available for TV channels. The best part is that India has large regional viewership while most of the regional news channels are trying to copy the English format of noisy debates rather than focusing on the news aspect.

It was anticipated that with the advent of social media and multiple TV News channels the traditional print media will show signs of decline but I will say that it will take some more time for traditional print media to write off so easily. With growing literacy in India the readership of print media has gone up considerably, more so the regional media has grown across all linguistic locations. While English media has grown largely in urban markets it is yet to make inroads into the semi-urban and rural markets.

While the bandwidth of internet has improved in most parts of the country, we are still far away from going full throttle which doesn’t allow readers to read online editions of traditional media. This implies that traditional print media will exist for another 5-7 years till such time that India attains bandwidth and also technology savviness gets into the DNA of large part of Indians.

To summarise, I must say the unprofessional and disorganised TV media (news) is making the traditional print media far more relevant in today’s context and they need to make amends in their format, structure, presentation before the viewers blacken them for not serving their news interests.