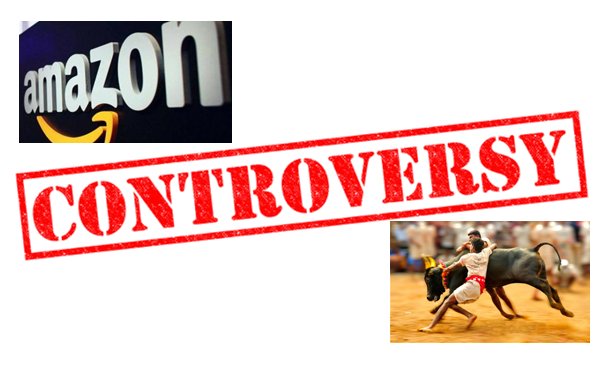 As the cold spell keeps Dilli chill-bound, we were preoccupied with the cold, of course. We also turned to a ‘doormatish’ issue that took on an Amazonian frame!

Walk into any departmental store, or click into any retail outlet (for household goods) and it’s quite the norm to come across doormats. But, then it can turn out to be abnormal too.  Here, what I refer to is the diplomatic crisis that was sparked by a doormat for sale at online retail Amazon. The only significant factor here was that the doormats displayed the Indian flag on their Canadian website!

The Indian government immediately got into the act over this flag doormat controversy, and threatened to refuse visas to Amazon employees. India’s foreign minister, Sushma Swaraj criticised Amazon and tweeted that Amazon should “tender an unconditional apology” and demanded that Amazon remove all products that “insult” the Indian national flag.

Fact is, Amazon sells doormats featuring flags of other countries but, in India, desecration of the flag is the worst kind of offense, that is punishable with exorbitant fines and may mean imprisonment too. For us, the national flag is considered to be sacrosanct, so to misuse it in any way is big “No”! It is showing disrespect, to the point of no return!

Amazon swung into action and officially put out a statement that it had removed the doormats from its site. Incidentally, six months ago, Amazon found itself in a similar controversy over sales of doormats illustrating Hindu gods.

If we remember, celebs had their troubling moments with the Indian flag. Like actress, cricket commentator and host Mandira Bedi. Her attire came under attack, when she chose to wear a flag-themed saree, while hosting a cricket match. Her saree had national flags of all the countries. There was an image of the tricolour that was apparently positioned below the knee, which was felt to be disrespectful! This flared up many tempers and finally Mandira also tendered an apology to all who were upset!

But, is getting engaged with controversies a repetitive affair? It seems quite so. After Indian Flag flip-flop, Amazon now got another taste of controversy with Mahatma Gandhi’s image. Their US portal put up flip flops with Mahatma Gandhi’s face on it! Highlighting the issue, Twitterati even tagged PM Modi and Ms Swaraj!  Not directly commenting on the slippers issue, Ministry of External Affairs issued a statement saying “Amazon should respect Indian sentiments.” Amazon notably, did not release any comments over the incident, but the flip-flops appeared to have disappeared from their site.

January brings with it waves of festivals with Lohri, Pongal, Makar Sakranti spreading happiness; and with Republic Day celebrations, it rings in patriotism too.

And, then there is the Jallikattu battle being fought in the state of Tamil Nadu. This 2000-year old sport started making news, of late. Jallikattu is popular as a bull-taming sport and is also known as Eruthazhuvuthal  or Manju virattu in Tamil. Dating back to almost 2000 years, this sport is enshrined in the rural culture in the villages of Tamil Nadu. Conducted during the harvest season of Pongal, the sport was banned by the central government in 2014.

The court in its 2014 judgement had categorically stated that bulls could not be used as “performing animals”, either for jallikattu events or bullock-cart races in the states of Tamil Nadu, Maharashtra or elsewhere in the country. Then, on January 8, the Centre had issued a notification lifting the ban on jallikattu in Tamil Nadu, which was challenged by Animal Welfare Board of India, People for Ethical Treatment of Animals (PETA) India and others.

But, opinion leaders did not shy away from extending support. Legendary star Kamal Haasan extended his support for jallikattu a few days ago, and super star Rajinikanth said the bull-taming sport should be held in tune with Tamil culture and had asked: is it right to negate a culture?

The battle rages on. Today, in protest, Tamil Nadu’s Marina Beach, was teeming with people, protesting for lifting the ban on jallikattu. It seems the turnout is because the youth feel an emotional connect with the jallikattu issue. So, this brings up the question: does the jallikattu uprising actually reveal failure of politics in interpreting or appreciating the Tamil sentiment?

Be the first to comment on "Patriotism and festivities…all wrapped in controversies!"