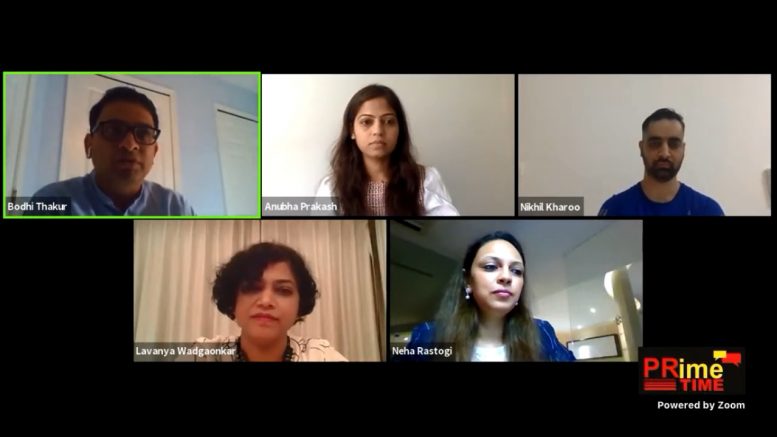 International work experience can often make a huge difference. And it can be both personally and professionally exciting and rewarding too. If you ask me, opportunities open up – to explore a new country, get a feel of a new culture, interact with the media and people from all corners of the globe. Today, the business world has switched to becoming more global, even though closer home we have the clarion call for going “Vocal for Local”.

It was a special edition on global Indians and the conversation focused on – ‘What goes into preparing for & succeeding in an international role’. The discussion was moderated by Neha Mathur Rastogi, Founder, WordsWork Communications Consulting and the participants were – Anubha Prakash, Head of Europe PR at OnePlus, BodhiSatya Basu Thakur, Senior Vice President & Group Business Director, WPP/GTB Detroit, Lavanya Wadgaonkar, Division General Manager & Head of Global Strategic Communications at Nissan Motor Corporation, Yokohama, and Nikhil Kharoo, Head of Communications and Partnerships at Fitbit, Asia Pacific.

With the growth of the internet and social media, borders have fallen off, as the world becomes easily reachable. Ideas, and not just people, can zip across widely. And now, with the pandemic, the scene is playing out differently – with the business scene switching to the ‘digital’ mode, it has indeed, eroded all boundaries.

Noting that this was five time zones coming together, was Neha as she questioned – does PR change from country to country? “Culturally things are different. Creativity behind storytelling remains same across the globe. Audience differs but campaigns remain the same,” said Bodhi. Having moved to different countries, he analysed that in Indonesia, China, England or America there are cultural differences, but the storytelling, the creativity is the same. “You have to be respectful and listen to the people. And it works!” he revealed.

Is language an issue? How does it work from the language perspective? After moving from India Lavanya realised that in Japan, one lesson to be learnt was – “don’t judge people based on their language. Communication is not literally about translation but transcreation in a multi-lingual environment”. It’s about getting across the right message.

For Nikhil, who manages communication in fourteen countries, it about realising the need to understand what value is brought to the table. “How do I take the local brand story and work with the local team to deliver results? When you know the overall story, as it was in my case, it worked well for me,” he shared.
Any fresh perspectives?

Having moved recently from India to London, Anubha noted that the Indian experience was the building block for her current role. She tries to contribute more and look at the broader picture; and then, the excitement to see how it impacts another region is immense. When you have a strong story, matching it with local nuances and adding the local flavours is important. “I am making use of my Indian experience here,” she spoke aloud.

Speaking about a local campaign and launch she was involved in, Lavanya referred to the launch of Nissan Ariya electric SUV, and she pointed out that the name comes from Sanskrit. Earlier they had planned for a physical event, but after the pandemic displaced life, they changed it for the digital world. It was a bi-lingual campaign for the Japanese market, for multi-channels and multi-stakeholders and the result was very impressive; it actually showed the value of communication. The campaign involved a global transformation plan announcement and the relaunch of a new logo – to rebuild trust and reputation. It was a question of how to align and tell the story in different regions. The result? The story was trending in frontier markets and even in markets they were not launching in! The launch pattern was – building towards D-Day with teasers, speeches were written (keeping to what worked in different markets) and the world premiere matched the excitement that was whipped up. “The storytelling had to be relevant, sensible and sensitive – for it had to make sense in each market,” she said. One of the key things here was – the pace is important, for if you follow in your own pace, it often doesn’t work! They ended up with a massive 99% positive coverage. Because of COVID, she noted that trust has become important and any message with trust is being well received.

Does the message get lost in translation?

We sometimes pay a lot of importance to the message but we need to look at it unconventionally, observed Nikhil. Language can be a barrier on storytelling for locals but putting across the right message is important. Fitbit is a product-driven company, and they defined popular culture in each country. For example, cricket is popular in India, so they connected with trainers and cricketers and understood how their brand could build a connect. He explained how they used Bollywood and cricket, and looked at what their brand Fitbit could do in terms of creativity, when talking about being synonymous with wearables. “We tried telling the story, without being in the story. Sometimes it’s important to experiment and take those risks and see how the brand can flourish!” he said.
COVID -19 has brought creativity out of each individual. The purpose of ongoing business is to connect; because of the pandemic, we have become emotionally connected to our audiences, he elaborated, striking the right note.
Planned for an International career?

When you look out for an international career, your horizon broadens personally, remarked Bodhi. It was a challenge for him, and he wanted to take up the challenge and do something bigger and better and, of course luck has a role to play. “You have to be at the right place at the right time!” he exclaimed.

And, once you step into the global role, what are the challenges? When she entered the new role in January, Anubha thought face-to-face interaction is important and extensive travelling was on the cards. But, all that swung in a different direction. “It takes a lot of self-discipline, for its not easy spending hours on Zoom. I felt the gap in the beginning but now, it feels normal,” she shared.

Recently while launching OnePlus Nord, they used a series of documentaries where the storytelling was adapted to suit different countries. In Denmark, Netherlands, Italy, Spain it was behind-the-scene storytelling, but in France they had to be vocal about work-life balance. “At the end of the day, we need to be clear that every media is thinking from their audience point of view,” Anubha noted. Plus in Japan, it’s traditional print-based media and relationships are important; in Australia the media is aggressive for they need the story at any cost, which is similar to UK media; and if you have a Round table, in Vietnam you have to talk at a slow pace and in China the questions have to be provided in advance!

How do you sell your stories to the media who don’t speak English? Lavanya was quick to state that they had interpreters and it’s about whether the story makes sense to that particular audience. If it works, they will take it!

This year has been a gamechanger, so are there any new PR perspectives that have emerged? For Bodhi, the biggest PR opportunity is the connection they have made across the organisation. Stories about how engineers were working from home clicked with the media, as they were looking for the human touch. During these times, people have leaned heavily on communication, and as PR professionals, we know what clicks, was his comment. When doing things remotely, virtually, there is a huge reliance on communication.

Positively, we have moved out of the boardroom, and every day there is a different story. “It’s brought the creative juices out of the brand and the purpose is very clear, for people are thinking real-time, and strategies are being developed every day and, that has challenged us,” Nikhil reflected.

How is internal communication different in other countries compared to India? It is audience-centric, and the difference is the language and the tools used, asserted Lavanya. Today, the communication is moving bottom-up, which millennials are shaping. In fact, they are moulding the way we communicate, was her parting shot.

What were the key learnings in preparing for an international role? The reactions captured, were varied.
Anubha : Have a mindset of Global Thinking.
Lavanya: Think about – your personal brand, what’s your sphere of influence, and how do you navigate the right way?
Nikhil: Look for opportunities to interact with different people. Always go with a clean slate. Start fresh.
Bodhi: Dream big! Raise your hand at the right time.

Be the first to comment on "PRime Time 3: What goes into preparing for & succeeding in an international role"