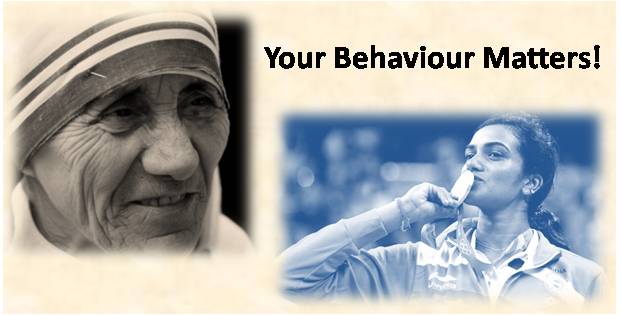 This week is special for me. It is about meeting a young woman whose fan I became along with a billion other Indians only about 15 days ago and then got to see her in flesh and blood and listen to her at an event. It is also about a woman who I had seen in flesh and blood twice during her lifetime when I was barely a teenager who became a darling of the world in the 80s for her humanitarian work.

This column is about what students of reputation can learn from Pusarla Sindhu and Saint Teresa of Calcutta and the way they carry / carried themselves in public life. Public Relations is 90% about behaviour and 10% about communications. If you watched the Badminton Women’s Singles finals of the Rio Olympics you would have seen various facets of Sindhu’s behaviour during and after the match.

Cut to the previous century, PV Sindhu was barely two years and two months when Mother Teresa passed away. There are several similarities between the two women who lived a century apart.

I had the privilege of meeting both these women who are the heroines of my column today.

I met Mother Teresa for couple of minutes where she blessed me, said her trademark line, posed for a photograph and signed an autograph for me (in August 1995).

I met PV Sindhu for a couple of minutes, when she was being interviewed for a TV show, she posed for a selfie and signed an autograph for me (in August 2016).

Both of them are different, yet so similar. Their belief and passion translated into hard work and commitment took them to great heights in social service and sports respectively. Most importantly their behaviour in public life has been what has stood them in good stead.

In Sindhu’s case she speaks extraordinarily well, better than many trained spokespersons. Saint Teresa of Calcutta too had a knack of touching lives with her quotes and one-liners.

I’m glad I could meet them and learn so much from them in the short interaction; most of all that Public Relations is about how you behave.

Instagram: The magic wand of communication and story-telling in PR