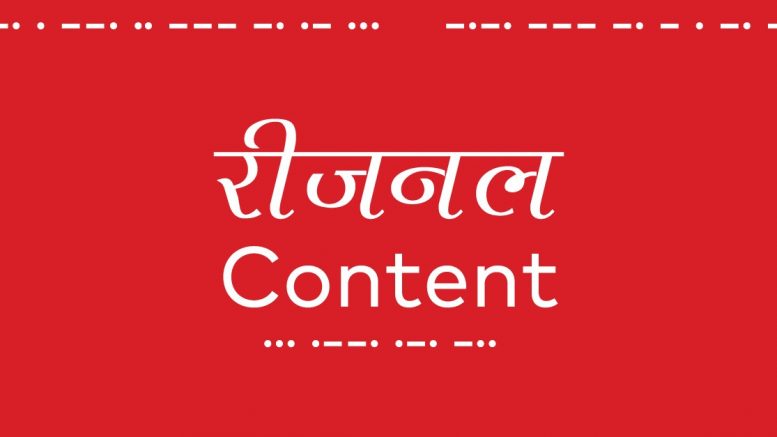 In a country with over 1600 dialects and 22 government recognised languages, it is only natural that Indians look to regional content, favouring the languages they relate to over the so-called lingua franca, English. From newspapers to magazines, from billboards to ads mounted on buses, depending on the region in India, content spans the linguistic spectrum. Communication has rarely been confined to the effects of our colonial heritage.

With increased Internet reach, affordable mobile data options, and a general rise in digital literacy, digital content is seeing a shift to the regional scenario in a big way. According to a recent report published jointly by Google and KPMG, 88% of internet users show a more active response to Indian language advertisements than to those in English. And it’s not just ads – regional OTT content is witnessing a boom so much so that the market size for digital video subscription is slated to reach at least 20 billion in the next 18 months. With international giants like Netflix and Amazon including Indian content (both English and regional language based) among their originals, it’s only a matter of time for Indian platforms to come to the fore. Viu, an OTT content platform that offers original content in Tamil, Telugu and Hindi, has witnessed a significant increase in monthly active viewers in the short period between December 2017 and July 2018 – a jump from 16 million to 20 million.

How is this Significant?

A report from PwC stated that revenue from these services is expected to reach Rs. 5595 crore by 2022, from just 2019 crore in 2017. Local content is more accessible to and relatable for the wider range of consumers. Certain regions, such as the southern states, have larger and more active audiences for vernacular content, making regional brands like Yupp TV a roaring success. It is no surprise then that agencies no longer have only people with advertising credentials on board. They take on film directors, screenwriters and animators to be an integral part of the team. Digital content has begun to play a key role in product and brand promotions because it enables subtle product placement and discoverability, as well as the potential to sell a product or brand in a relevant context rather than solely based on its features.

The presence of brands and their products in Bollywood and even Tollywood films has been observed for years. This strategy has been two-pronged – through in-film product placement, and through co-branded marketing. It’s no surprise then that with the platform shift in entertainment, there is a simultaneous shift in marketing and advertising. With branded content growing annually at a pace of 130-150%, advertisers are hopping on board the digital bandwagon. This is either achieved through brands creating their own web-series or by choosing to propel their brand via a web-series. Series like The Sweet Breakup backed by Sugarfree and The Good Vibes backed by Legrand are examples of brands endeavouring into this domain. The former, a show about food complete with a celebrity chef, establishes a direct association with the brand. The latter, on the other hand, is a production about a young, married couple and the ups and downs of their life together. Here, the brand presence is relatively subliminal, with awareness created through the story of the couple renovating their house, facing electrical issues (which cause their spark to temporarily become friction) and eventually solving their household problems, consequently repairing their relationship. Depending on the nature of the brand and the industry it falls within, the advertising strategy may differ, but clearly going digital has become a viable option.

To further fuel marketing and branding potential, regional content only makes the digital medium that much more accessible to consumers, creating widespread awareness and converting simple interest in entertainment to the actionable aspects of consumption and patronage of a brand.

With an increasing number of brands understanding the significance of vernacular communication, a large, untapped, digitally literate audience is being reached out to. These are the consumers who are internet savvy and have access to digital devices, but who have not been able to relate or connect to English language content. With regional content it isn’t just brand awareness that can skyrocket, but also brand recall. Brand philosophy intertwined with easy-to-understand quality entertainment that is effortlessly accessible online, creates the perfect blend of appeal and awareness.

With higher internet inclusion, higher brand reach, and ultimately wider relatability, regional content is poised to take digital India by storm, and it is here to stay!

Public Relations: What lies ahead