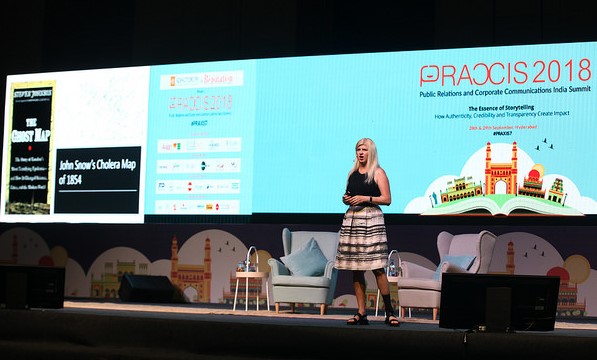 “Research is at the core of Powerful Storytelling” was what Tina McCorkindale, President, Institute for Public Relations spoke about in her keynote address at  #PRAXIS7.

The minute detailing of research was apparent from the word ‘go’. The opening slide highlighted the common disease Cholera, as she gave research-based statistics and explained that it is an infection of the small intestine by the bacterium Vibrio cholera and that Cholera affects an estimated three to five million people worldwide and causes 30,000 – 1,30,000 deaths a year. John Snow’s Cholera Map of 1854 displayed, was proof to the spread of devastation.

So, why does her cholera story matter? She elaborated on how telling a story engages your brain, which is critical for common people to understand. Why do stories involving statistics engage your brain? The equation here is that it explains, enlightens, and engages. So the visuals, data and narrative all work together to create meaning.

Then focusing on the different parts of the brain, she pointed out how our brain becomes more active when we tell stories. She referred to Neuroeconomist Paul Zak’s “The Love Hormone” and asked – what drives our desire to behave morally? It was revealed how Paul Zak shows why he believes oxytocin (he calls it “the moral molecule”) is responsible for trust, empathy and other feelings that help build a stable society.

But, here, there was a word of caution – beware of misleading popular research, for it could be false, she warned.

In the science and art of storytelling, a good example is Netflix, which reveals content must be compelling. Again the statistics backed this fact. It showed that 70% of users binge-watch shows, the average viewer watches around 2 hours per day when they are trying to complete a season of a series, and the average person takes 5 days to complete the first season of a binge-watched series.

What must storytellers do? “They must first sustain attention by developing tension for attentive listeners and share the emotions of the characters. Then mimic the feelings and behaviors of those characters,” she shared. Gustav Freytag’s dramatic arc of storytelling displayed a pattern – exposition of the plot leading to rising action and climax, then falling action, leading to resolution or catastrophe.

What else can you do? Have character-driven stories with emotional content, and tell a compelling, human-scale story. Ask important questions: Why should your viewers/readers care? How does it improve their lives? What does it mean to them? What barriers did they overcome? Then do the research: people are more motivated by an organisation’s transcendent purpose rather than the transactional purpose, she pointed out.

Finally, she gave some useful tips:

When in conversation with Rohan Vyavaharkar, Director – Communications, Omidyar Network she was questioned, how would you realign storytelling and how do companies sell their stories. Her explanation was that “for companies, it is taking a step back and attempting to build the brand promise”. But stories have to be authentic, honest and have to represent the core brand. Talking about the how to get the marketing manager to see beyond the headlines, likes and tweets, she felt that it was really research that they could depend on, which can say how storytelling can help (and academics have done a lot of research).

Be the first to comment on "Research: The Core of Powerful Storytelling"