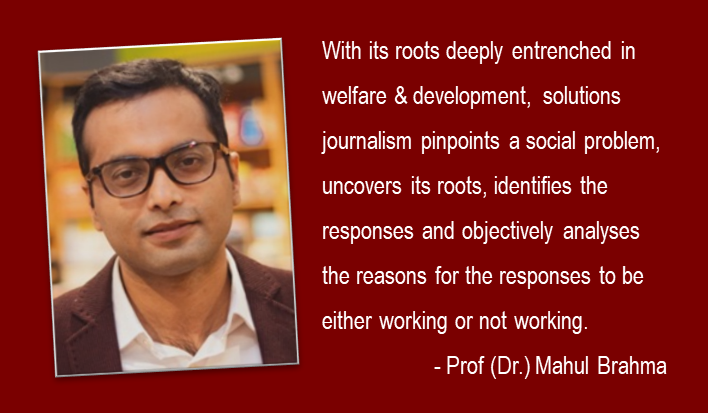 The press or the news media is often billed to be the fourth estate of a democracy. Experts say that it keeps a tab on the other three estates – the legislature, the executive and the judiciary. Is that actually the case? To be precise, the reality is a little different. In the quest for increased readership, TRPs and hits; the news media has plunged to record lows. Consequently, the press has failed in its primary objective – that of bringing in a positive social change.

The clamour for sensationalism has made the news media problem-centric. Thus, what we essentially read or see on popular news outlets harp on the problems. While the purpose of information dissemination is served in the process, the society hardly benefits. In developing countries like India, where the press is largely owned by corporate entities, news is nothing more than a commodity. While no one can possibly discount the importance of commercial considerations, it can possibly be said that journalism is not just a profession, it is a social calling as well.

Now that the decks have been cleared and the context has been set, it is important that we take an quintessentially different way of looking at news and consequently journalism. This approach that has been adopted by multiple news organisations in the world is known as solutions journalism. As cliched as it sounds, this ethical approach to journalism has a definite purpose. To put it in very simple terms, solutions journalism is an evidence-based way of reporting that tries to find out the probable solutions for a given problem. Solutions journalism in fact is more of a philosophy that believes in taking a story to its logical conclusion – that of finding a viable solution.

With its roots deeply entrenched in welfare and development, solutions journalism pinpoints a social problem, uncovers the roots of the problem, identifies the responses to the problem and objectively analyses the reasons for the responses to be either working or not working. The fundamental idea is to figure out a better way to deal with a given imbroglio and cause some qualitative changes to the society.

Solutions Journalism and the Social Backdrop

At a time when instant gratification is the name of the game, any qualitative approach that vouches for the establishment of an alternative social order is fraught with multiple challenges. Solutions journalism isn’t an exception either. Most of the news organisations deal with information in a superficial way and hardly analyses the backdrop. Therefore, we have a seemingly ‘informed’ citizenry that is clueless about ways and means to craft a just society.

Solutions journalism could also be categorised as an effective feedback system that lets the society deal with emergent challenges in all its dimensions. Also, it focuses on participatory development that could be considered to be the backbone of a democratic information order.

One of the biggest drawbacks of the contemporary information order is the developmental disengagement of the citizens. The overbearing nature of problem-centric journalism has caused a general news fatigue amongst consumers thereby creating a public numbness to pressing issues. Consequently, grassroot development has been the biggest victim. Solutions journalism addresses this very lacunae. It creates an active audience (not just passive consumers of information), who mediate the very process of positive social change.

While the textbook definition specifies that the primary job of a reporter is to expose wrong-doings, definitions could be constricting and traditionalist at times. In the late nineties, the term constructive journalism first started featuring. Again, the idea was to go beyond the problems and help the society to find out effective solutions. However, as time went by and the world essentially adopted a digital avatar, constructive journalism metamorphosed to solutions journalism thereby according it a semblance of international acceptability.

The Multiple Contours of Solutions Journalism

While contemporary journalism has degraded into a combination of pointless noises and shameless propaganda, solutions journalism provides an alternative proposition. It not only recognises the inalienable right of citizens to stay informed, it also provides some viable solutions to vexed problems.

However, the only problem that solutions journalism poses is an alleged shortage of objectivity. At times, it reduces itself to unwarranted and unwanted activism, often at the expense of value neutrality. That said though, neutrality could also be overrated at times.

To sum it, it could be argued that journalism could regain some of its lost credibility if it moves the solutions way and the time is now.

Be the first to comment on "Solutions Journalism: The times they are a-changin’"

Women can be better leaders and the reasons are aplenty!

Importance of Reputation Management in PR

The world is your oyster