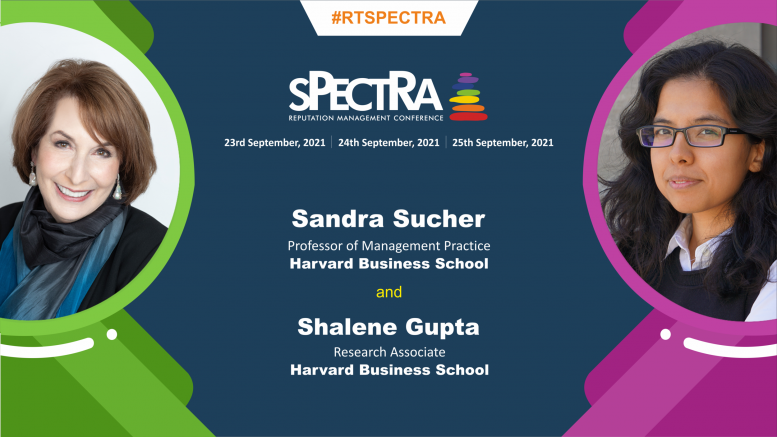 The power of trust can help you step over many crossroads and create many moments of truth. The dynamics of trust are delicate – it can be earned, it can be lost and it can be regained. This was clearly illuminated in the discussion on “The Power of Trust” by Sandra Sucher, Professor of Management Practice, Harvard Business School joined by Shalene Gupta. Incidentally they had jointly published a book of the same name. It was based on two decades of research which illustrated a vivid storytelling pattern, as they examined the economic impact of trust and the underlining science that led to a comprehensible conclusion –  establishing that trust is built from the inside-out.

Evidently, trust can be regained, even when lost, as revealed through their stories of companies across the globe, who steer themselves out of scandal and corruption, by getting down to doing things right.

It’s when behavior matches expectations that trust comes in. Most importantly, trust is also related to reputation and ethics, and is crucial to business. So, logically, being trustworthy generates a wide range of benefits for an organisation.

Backed by intense studies on how organizations build trust and the vital role leaders play in the process, the internationally-recognized trust researcher and professor Sandra first marked out three principles of trust. This will help us understand how trust works, she said. The three pillars are – trust is vulnerable to actions of others, trust is limited and trust is built from inside-out. Referring to the current COVID situation, she pointed out that the vulnerability here is that we know we cannot create an effective vaccine soon, but we still trust the good intentions of the organisations who are trying very hard. And, it’s inside-out because we trust the organisation in the work they do – from the inception to the final distribution.

Trust has a real impact on performance, added Shalene, as she joined in. Specifying the benefits of trust, she spelt out the advantages, as it leads to very positive, profitable results. There is a strategic advantage as seen in thirty NCAA basketball teams, whose firm trust in the coach directly corelated to victory. Then the revenue advantage comes in, as demonstrated in the case of Holiday Inn where 6,500 employees rated trust in managers from a scale of 1-5, which revealed a 1/8 increase in the ratings corelated to 2.5% – $250,000 increase in revenue. A clear economic advantage too is highlighted in a World Bank study of 29 market economies clearly unveiled a 10% rise in trust that corelated with a 0.8% increase in GDP.

How do people trust anyway, is trust vulnerable, questioned Sandra. There are different elements of trust like competence which is a company’s basic ability to deliver a product/service; there are motives involved – whose interests does a company serve; and there is the means and impact, as in what is the result of the company’s actions. A company can be competent, but it cannot be trusted. Here she shared the example of Uber in US that “everyone loves to hate”. Even though the company was highly innovative and technically advanced, and met customer needs quickly, a scandal that cropped up in 2013, had a massive negative impact. This led to a down share and the market share slumped to 68% (when initially it had 90%) and its competitor Lyft has 22%. On the one hand, we hate Uber but we still use it, disclosed Shalene.

Building trust is a very intensive serious business, which HDFC Home Loans did with a lot effort. In 1977 when they launched Home Loans, it was very new and they immediately created waves and by 1980 HDFC had 100% private lender market share. HDFC has an unprecedented amount of trust because it helped the entire business and is also the trusted advisor to the government, said Shalene which goes to show that trust has an incredible amount of benefits.

When customers or prospects trust a brand or organisation, they are, essentially, putting their faith in them, in the belief that they will behave authentically and consistently. Sandra shared that normally, “Trust is a crystal vase. If you break it, there’s no way of putting it together”.

It looks like recovering trust is impossible, but is it really possible? Yes, it is achievable. What can be done? Firstly, acknowledge the harm done and apologise. Secondly, hold people responsible and lastly, fix the problem. Here, she shared the ‘Recruit scandal’ that happened in Japan. The company was involved in an insider trading and corruption scandal that forced the PM and his cabinet of prominent Japanese politicians to resign in 1988. But they worked on it and Recruit’s unique corporate culture helped it survive the scandal. Today, it is a $20 billion company and has 50,000 employees worldwide. So, finally the big story is that lost trust can be recovered, underlined Sandra.

Be the first to comment on "SPECTRA 2021: The Power of Trust"

The Art of Corporate Storytelling

Do CMOs care about distinctions between PR and Marketing?