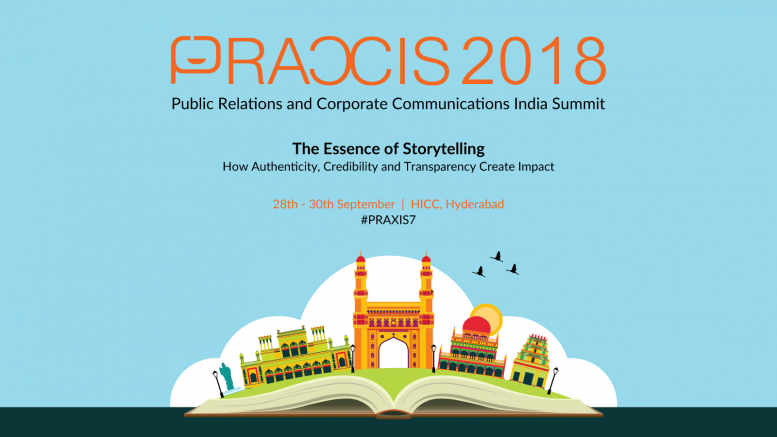 It was an enriching experience last week attending ‘Praxis 2018,’ the annual summit — or the grand jamboree, if you will — of India’s public relations community, at Hyderabad, organised by the folks who publish Reputation Today. Such a gathering can be a bit confusing for a journalist as one of a handful of odd ones out from a related yet different profession to be present there. Sometimes I felt like a spy, sometimes like a gatecrasher and sometimes like a rank outsider. But the common thread between the PR professional and the journalist is the “story” — and it is fascinating to watch storytellers telling stories to other storytellers about storytelling, unmindful of the eyes and ears of someone whose idea of a story may be quite different.

Here are my big takeaways from the conference, with my own added “ScribeView” insight on what the journalist would feel in such a context.

ScribeView take: Journalists look for credibility. Just as there is an important but seemingly thin line dividing seduction from wooing, there is a key point where empathetic storytelling should avoid becoming clever spin doctoring.

ScribeView take: Is this the “How to lie with statistics” department? Sourcing is important, and data is helpful, but there is a point where a good anecdote works better than bad data. Only the previous week, I met a grassroots activist who proclaimed: “I am the data” and charmed the audience with her insights based on her personal experiences.

ScribeView take: Necessity is the mother of invention and so are stories. Communication excels when it comes from the heart.

As if to prove the power of brevity, digital guru Sree Srinivasan said: “In digital, clear is the new clever”. Gauri Sawant said: “Motherhood is a behaviour. If you love someone and care, you are a mother.”

ScribeView take: A mere word or a carefully-crafted sentence can make all the difference in communication. Have you ever looked at every word as if it was a key to opening a big, strong vault?

All that brings me to the carefully structured title of Praxis 7: “The Essence of Storytelling: How Authenticity, Credibility and Transparency Create Impact”.

Honestly, I thought those three words abbreviating to “ACT” belong more in the domain of journalism and serious art than public relations. I would greatly appreciate anyone from PR believing in those three words. It is too good to be true but is a sign of maturity in the industry. However, as a realistic (cynical?) journalist, I can only ask a simple question to my reputation management friends: You have clients who believe in authenticity, credibility and transparency? All the way? Seriously?

Be the first to comment on "When storytellers tell stories about storytelling: My takeaways from Praxis 7"