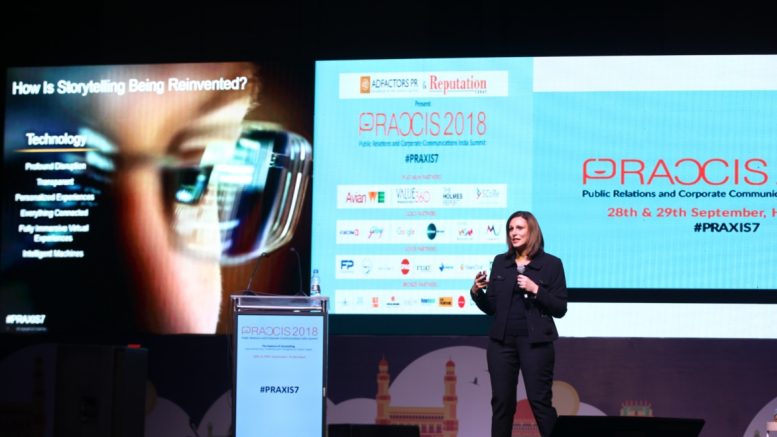 The way we tell stories is changing, moving beyond a static screen or page and it’s more about delving into the multi-dimensional. Is the future of storytelling all about reinventing the way stories are told? This was the basis of Stella Low’s keynote address on “Reinventing Storytelling in a Dynamic World”.

Facing an extreme communication challenge was a reality for Dell in the last ten years. We are in a dynamic world, and what’s changing? Firstly, there is emerging technology, the documentation landscape and the social climate, she explained.

What’s changing in the communication landscape? In UK only 20% are reading newspapers and use of social media is going up. Visual content has become more important than ever before. As for how many more times will social media be shared, the answer is 40 times. And if you have wondered how much % will colour images increase readership of a story, the answer is 80%.

Today it is the age of ‘breaking news’. Anyone, anywhere can break a story and stories can break internally or externally. And, from the internal point of view, the power of the employee is upfront.

And if you consider the Trust Barometer, trust is falling in India and US, she pointed out. In the decade of fake news, how many can recognise fake news? 59% think it is hard to recognise fake news. So, it’s not difficult to see trust falling. “But the good news is that people are trusting journalists more,” she added.

Presenting some mind-boggling statistics of the current status, she demonstrated how millennials and Gen 2 are definitely changing society today. What % of Gen 2 are willing to take a pay cut to work for a socially responsible company? Well, 62%. What % of millennials would switch brands to one associated to a good cause? That would be 91%.

At a time when the clear fact was that “trust in business” is at an all-time low, it must be noted that “purpose” matters. So it’s become a question of reinventing stories, with impact.

Then she referred to Dell’s campaign ‘Realize 2030’. A new dawn of immense possibility is on the horizon, she exclaimed. “Realize 2030 is our thought-leadership program here at Dell Technologies. And we realized some time ago that a lot of our customers are ‘very fearful of digital disruption’. Around half of them are telling us that they’re worried about digital disruption, and again, nearly half are saying they don’t know what their industry is going to look like in three to five years’ time, which is quite shocking,” she said. Digging a little bit deeper, they did some research with the Institute for the Future, who really are starting to paint the picture of what the future’s going look like in ten to twelve years’ time. So, it was really looking at 2030. So if they don’t know what their industries are going to look like and how the world is going to change, they felt as a vendor that – “it’s our job to have a point of view and to explain that to our customers”, she added.

Dell Technologies surveyed 3,800 business leaders from around the world to uncover their forecasts for the next decade. The research revealed a divided vision of the future but displayed a common ground on the need to transform and how. Emerging technologies are being used to reshape lives and entire industries as we move forward to 2030; it points to how we can realize the true potential of our relationship with technology to drive human progress, she said.

When Arun Sudhaman, CEO/Editor-in-Chief, The Holmes Report observed that technology is on a disruptive course, and people are struggling to deal with the change, she felt we need to present and talk about things, as sometimes we get too technical.

Storytelling mode has been changing, but how is that impacting talent? It’s important for people to think visually. When questioned, how do you think consultancies should change, she concluded – “We are moving in the right direction”.

Be the first to comment on "Is the future of storytelling all about reinventing the way stories are told?"