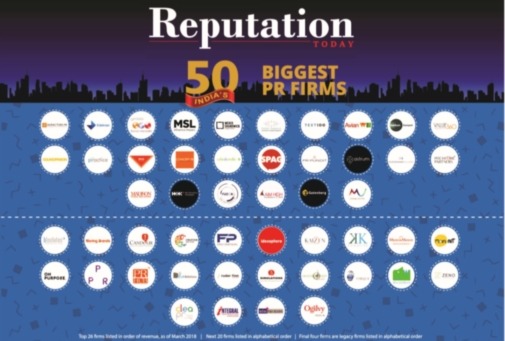 Public Relations consulting firms have bloomed and grown in India over the last three decades. Never has there been an attempt to list and rank the biggest firms by revenue. An exercise like this would serve at least three purposes – It would help clients and potential clients decide whom to invite to pitch for a business based on size; It would help professionals make a more informed decision on which firm to join based on size and; It would help the firms know where they stand vis-à-vis their peers.

Over the last year we researched and arrived at a list of over 150 firms. Yes, as of March 31st, 2018 there were that many or even more firms offering Public Relations ideation, planning and execution services. This exploration was enabled mainly through online searches and extensive data mining on LinkedIn. By firms we mean an entity which was at least three months old and had at least a three-member team including the founder, serving at least three retainer clients. We called it the three by three formula to accept the name in the long-list. The minimum service that these firms offered was media relations planning and execution.

We then spoke to clients, team members and looked at ROC figures wherever possible to ascertain if an entity was at least making upwards of Rs 8 lakh a month or Rs 1 crore a year. We also invited firms to submit a CA-certified copy of the balance sheet and several did so. We have applied trust in a large measure to this process. There is a possibility of error and we will be able to correct those in an updated edition.

With this filter we were down to less than 100 firms. We then added another filter – to see if firms had an annual turnover of over Rs 2 core.  This led us to a shortlist of 50 firms and these are bracketed into six categories by revenue. Super Giant (100 crore+), Giant (50 crore+), Large (20 to 50 crore), Mid-Sized (10 to 20 crore) and Emerging (those that have a revenue of less than 10 crore). It boiled down to a list of 25 firms where the revenue was 10 crore and above and 25 firms that had a revenue of Rs 9.99 crore or below. We also have five legacy firms in this list whose income was closely tied to the parent firm or they have not grown in the last couple of years. We have put them in the list.

In the Top 10 the first and tenth firms were Indian headquartered, the second to ninth were sold to or acquired by an international company barring one which had grown organically and was one of the first firms to enter India on its own in the early 90s. There are two firms who were in the 100-crore club. The second largest firm had lost one of its biggest clients few weeks before the financial year ended to the largest firm. So, it is possible that it may not be the second largest firm now and could have dropped to the fourth place. But for the purpose of this list we are following the financial year that concluded on March 31st, 2018. Globally, Cohn & Wolfe and Burson-Marsteller have merged but we have kept them as separate entities in the list, as the merger has not taken place in India.

Adfactors is miles ahead inching towards the 200-crore mark. Edelman India crossed past the 100-crore mark and may find it hard to remain there due to the loss of its largest client at the end of the six-year term. They are followed closely by GBM and MSL India in the 90s and 80s and Weber Shandwick India in the 60s. Together these five are the Giants. And their revenue alone is close to half of the total revenue earned in Indian PR which is in the vicinity of INR 550 crore.

Then there are ten large firms ranging from 50 crore to 20 crore. Perfect Relations, now part of Dentsu is made up of several brands. Text 100 India is the oldest of the international firms to have launched in India on its own over two decades ago and is ranked seventh. Thereafter we have Avian which was acquired by WE few hours before the financial year ended to become Avian WE. Closely followed by Ketchum Sampark, Value 360, Golinopinion, The Practice, APCO Worldwide, Concept and Cohn & Wolfe Six Degrees. These firms would have a combined revenue of INR 250 crore.

Thereafter we have listed 25 firms which are Emerging Firms and three out of them stand out having a base in New Delhi, Mumbai and Bangalore respectively. These are First Partners, Ideosphere and On Purpose Consulting. They are unique in their own way. Besides, there are the four legacy firms – Melcole, Ogilvy, Integral and Clea. Then there are 14 others listed in alphabetical order. Blue Lotus, BoringBrands, Candour, Kaizzen, Kommune, Media Medic, PRHUB, QuikRelations, RuderFinn, Simulations, Skateboard Media and WordsWork. Finally, the three firms that belong to the Giants yet operate as independent brands. These include PPR (associated with GBM), Zeno (associated with Edelman) and Creation (associated with Weber Shandwick).

There could be some firms that are not listed here. The only reason for that is we are not aware of their existence. There could be some firms in our original long list that did make the cut either because we could not get the accurate size of the firm. All in all, this list has been put together because there has been a need to create something like this for the primary benefit of potential clients and potential employees who would be able to find it helpful to have access to a list like this.

Ultimately, we must take pride in the fact that the Indian PR business did not exist 25 years ago and today it is coming of age. There is a long way to go. The golden age is ahead, and this phase will witness the Top 15 firms having sizable offices in the ten state capitals beyond the metros from where another INR 500 crore of business will get generated by 2025.

To the Indian PR professional, there is no better time to be doing what you have chosen to do.