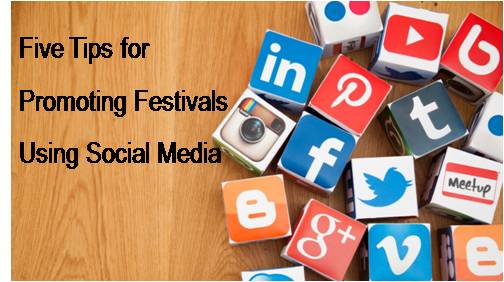 Festive season kicked off a few months ago, and for many in India, festivals are a lifestyle. During festivals, it’s common to see various social feeds flooded with #selfies and live videos, just like we were exposed to, during the Cold Play event recently.

Whether it’s music, art or corporate event, social media offers the perfect way to promote a large festival, and it can turn the entire experience into a shareable one.

For large festivals, social media is today, critical for promoting and inviting festival-goers to participate before, during and after the festival. You can even use social media to promote a smaller, more intimate affair. As the New Year unfolds, we’re sure to see more innovative social campaigns that will heighten festival experiences.

Conversations start long before D-day. The conversation surrounding a given festival is not limited to the D-day or the weekend that it takes place. There are pre-event and post-event activities. It begins months ahead of time – when the line-up is announced or when tickets go on sale for say, a music fest. And, often continues weeks after the festival with people sharing great moments in Facebook or Twitter. Creating a social hub, where this conversation can thrive is a great way to capture the excitement and inspire others to join in.

For the recent Cold Play music extravaganza, headlines blazed – “It’s official! Coldplay is playing in India on November 19 and the ticket is not Rs 25,000, it’s FREE” which sent fans into a tizzy!

Use tactics to increase buzz, even before it happens. Your social media outreach program will probably include a mix of Facebook, Twitter, viral videos, social contests, mobile check-in services and so on. For a music event, normally, the main goal is to garner maximum ticket sales. After this is achieved, make sure to continue your social media programs, on D-day and even after, to keep the pace. For example, during the festival, host a virtual info booth on the festival’s Facebook and Twitter pages – giving festival-goers access to all the info they need while they are at the show like – which entry gates have the shortest lines, where do you get drinking water etc.

Knowing which performers and performances will attract most interest is critical. The first step is to figure out what your fest’s biggest draw is. This done, you can go ahead to create a Facebook page, launch a Twitter stream, design a social contest, or any other social media tactic. Is the attraction because it is an established music fest, or is it a famous band? Or is it a star CEO? A celebrity appearance? A landmark piece of art?

Once you’ve determined what the pull is, focus on that angle. Your entire social program should point to driving awareness among the target group, like fans and encouraging them to spread the word among their own networks.

Part of the power of social media is sharing – creating the content people want to pass on to their friends. So, make sure the content you create is highly shareable – music, videos, contests, games, giveaways, fun titbits about the stars. Encourage people to share content in return for rewards; if a fan shares the festival page with 20 friends, give them a discount on tickets, for example. We saw this in action, again during the Cold Play event.

Using mobiles, festival-goers can continue sharing experiences, during the event too. A social tent can be hosted, where they could take photos with friends and instantly upload them to Facebook or Instagram. They can also produce some viral or engaging videos about the festival, and post them on Facebook and YouTube, so that moments can be shared.

The star-studded festival was more than just your normal concert. Instead, it was part of Global Citizen’s efforts to not only steer attention to serious issues affecting citizens around the world but, in the process, they actually pushed people to take action! In order to attend Global Citizen’s Festival, party-goers had to ‘earn’ their entrance. “You have to earn it, not just buy it”, as the tagline for the dark chocolate goes.

Be the first to comment on "Promoting Festivals through Social Media"

There is nothing permanent except change

Thank God, the questions have changed