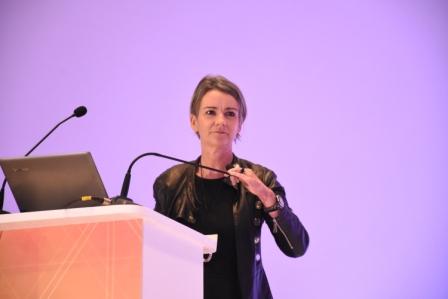 Text 100 has completed 20 years in India, said Aedhmar Hynes, Global CEO, Text 100 as she began her talk on “The Power of Creativity in Building Corporate Reputation”. Her love for India was quite evident from the start. “I’ve been coming here for the last 15 years and this country has something that fascinates – the passion, the energy and colour,” she elaborated.

Creativity was the focal point of her talk, and wanting to be different, she said she would like to start with a question – what is creativity? This got answers from the audience like –  it’s the process of creating something, ideas and so on. Her point was to highlight the fact that we all see creativity somewhat differently, so that she could get everyone “on the same page”. Then a second question was thrown open to the audience – who are the people who consider themselves inherently naturally creative? Many hands went up, but she confessed that she didn’t consider herself as a creative person, but “I definitely appreciate the notion of creativity, but am not sure whether it’s an innate part of my skill set!”

But she was no stranger to creativity. Over the years, she has learnt much about creativity, which was clear as she carried on her presentation. “I get much of that either from my clients or from the Text 100 people all over the world,” she explained. The nature of interacting with different cultures, styles and approaches has given her a sense of a greater degree of creativity than she would have imbibed. So just to define, she pointed out – creativity is to say things differently and it’s about being open-minded to possibilities and having the perspective that – everything is possible! It’s something that is mind-blowingly original, abstract or sometimes it’s a creative solution that is so simple.

Creativity in human beings brought up the brain map – the left and right side of the brain; the left side is analytical, logical and the right side is creativity, full of colour, vibrancy. And, we all have a working brain, she said. For most part, we have to key in, and focus on our capabilities.

In history, we have had major disruptions that have typically rewritten the rules. But at the heart of every communication, she was clear, is a story, and we are storytellers. “And I think we people are the central tenant of communication in the future”; in fact, creativity is at the heart of advertising, and as a community we cannot not take up creativity and own it. In fact, we as a communicators, have to bring creativity to every aspect of all that we do, she argued.

Then coming to the “reputation of creativity” she shared her experiences with some of the brands she worked on.  There was the work done on Xerox and the approach they took involved fundamental innovation and research. What was unique was getting diverse people together and build solutions. “At Text 100 we bring diversity to tackle issues,” she said.

Having worked 15 years with IBM, she talked about when IBM decided to sell the PC division in 2005. What’s interesting about this decision was it would mean they had no touch with the consumer. So, the thinking was – how do we have a touchpoint with consumers? They came out with the ‘Smarter Planet’ campaign which was built around a simple concept – the consumer may never buy the technology of IBM, but he is very much concerned about the planet.

Another case in point was SunTrust in South America, which was a financial institution that faced financial crisis in 2008, as a result of which they were experiencing negativity among their consumers and the trust factor was at an all-time low. Then, they set out to focus on the greater purpose – what they could do was to “light the way to financial well-being” and prepared a programme called ‘onUp’ to engage with people – to make them actually feel the trust.

“My bottomline in all of this – we as a business need to “be bold, make your words matter! And, how we approach creativity is important,” she said. Take simple measures – how we run businesses, check out how can work environment be conducive to sharing ideas? Here, she shared the experience of Text 100 in London, where last year they introduced the “agile work experience” – to much success. They dispensed with the desk, added simple things like – jigsaw puzzles, colouring books on tables – trying to create some interest in the workforce. And, work, it did!

“Think differently, you have the power” was her parting shot.

Corporate Social Responsibility – An asset to reputation during crucial periods