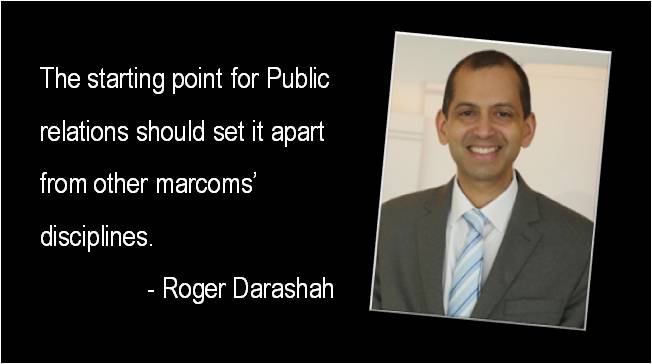 Countless books have been written about the subject, there are MBAs who are dedicated to it, billion dollar agencies have been built around it . . . the brand was one of the World’s most powerful ‘intangibles’ of the 20th century. I use the past tense since the nature of brands changed, conveniently around 2000, with the propagation of the Internet and, in particular, social media. The latter enabled consumers to answer back to brands’ declarations, evaluate the performance of their products, and broadcast instant reviews of anyone representing them. In essence, companies lost control of their brands; the latter were now influenced – and in some cases, completely redefined – by third parties.

This shift is now accepted. Even the most one-eyed brand manager recognises the difference between a paid advertisement and a Twitter conversation . . . , well, usually! However, there is a secondary effect which I believe the public relations business should seize. The starting point for brand conversations – or conversations that brands could potentially participate in – and it’s got nothing to do with the brand. It’s about the audience.

Let me explain. In virtually all conversations I have had with marketing professionals (consultancy-side, in house) over the last 25 years, the starting point is invariably the ‘brand’; what does it mean, what is its character, how should it be positioned, how should it be expressed? In some instances, this conversation is reduced further to the product or service being promoted; what are the features, how do they differ from the competition . . . ? All good conversations, full of insight and relevance, but they are never going to reveal the full story. In most cases, the presumption of need is already, implicitly assumed.

As a business (public relations), don’t we owe it to our clients, and our profession, to take a step back and imagine a world where the product was yet to exist; a world ‘pre-brand’? Only this scenario enables us to define the purpose of a particular product, the need it addresses, the purpose it fulfills, the ‘itch’ it ‘scratches’. My experience, however, is that ‘pre-brand’ often remains unspoken, or even taboo; particularly amongst traditional marcomm practitioners wholly dedicated to the brand to a degree where even the possibility of a world without a particular product, category or brand remains inconceivable.

There are some great examples of ‘pre brand’ thinking in action. Through its insurance arm, Halifax, the UK bank, Lloyds, identified a ‘new’ and ‘alternative’ discussion which extended beyond the realms of retail banking, towards the lives and issues that mattered to one of its key audiences, Generation Z. Unlike their predecessors, home ownership is no longer a realistic or desired objective for under 25s; a radical shift for British society and culture which was traditionally built around the mortgage. The insight highlighted the many advantages of home rental – flexibility, cashflow, increased choice of quality rental apartments (the ‘Airbnb effect’), alternative employment patterns – and the numerous cultural and lifestyle consequences of the same; from TV drama to social anthropology. Lloyds’ Generation Rent storyline enabled the brand to extend its relevance to social and cultural conversations – about, by, for and from its audience; each of which represented an opportunity for the brand to propagate its message. Through this approach, it also sought to mitigate the reputational risks associated with engaging exclusively with traditional banking and finance media, by creating new relationships with alternative channels; in this instance, lifestyle, feature writers, and, even, trends and cultural commentators. This approach ensured that the brand remained visible, the narrative became a vehicle through which messages could be conveyed in a far less confrontational way than through the specialist media.

I have no connection with Lloyds or the firm behind their campaign, (I just saw the content in the Guardian and was intrigued), but it is a wonderful example of ‘pre branding’. Generation Rent is a genuine cultural insight (it is not dependent on the brand for its existence or meaning), and provides a perfect platform for the bank to introduce its proposition. Last year, for instance, a Generation Rent Report was published to examine the implications of delayed home ownership on savings and retirement plans.

Such examples of the societal need for a particular service being demonstrated, before the product itself tend to be the exception, in my experience (I’d love to hear otherwise!). Typically, marcoms’ conversations are dominated by ‘post brand’ considerations, where the need for a product is already assumed. The consequences of such an approach are reductive; storytelling is reduced to product features, brand conversations become self-referential and introspective.

This is okay if you are Elon Musk proposing to colonise Mars, where the product proposition is the story. But for PR firms trying to find space and attention on behalf of our more mundane clients, ‘pre brand’ is a better place to start.