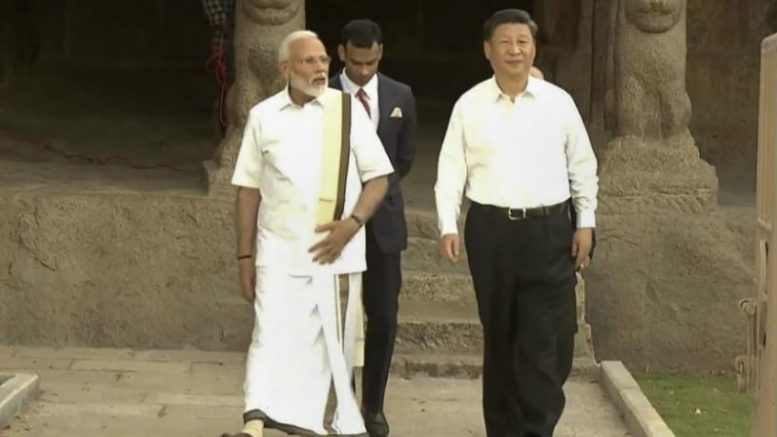 The brand founded in the small town of Avinashi in the rural belt of Coimbatore won social media traction because of the way it has created a big brand out of a traditional tropical dress, constantly innovating in product, design and marketing.  Ramraj has branded competitors now but it has top-of-the-mind recall in its category, akin to Hamam and Lifebuoy from Hindustan Unilever Ltd in soaps or Godrej in almirahs.

My big lesson from the Modi-Xi summit was this: when a brand owns a category space and creates a buzz factor through a combination of production, marketing and above all, innovation, there comes a moment where it flies up on its own, gaining more traction (think synergy) than it would appear based on simple arithmetic. In PR terms, that’s dollops of earned media.

Although the veshti is known to be a staple of Sri Lankan leaders on both sides of the Sinhala-Tamil divide (known as sarama, including the coloured variation), it was the Modi government’s current target, former finance minister P. Chidambaram, who made it a national talk-point. Modi  has raised it to a new level because he comes from outside southern India. Ramraj is a certain gainer, along with the competitors he has inspired (One of them is called Minister White, a fascinating brand name!).

If  Ramraj as a brand has a PR consultancy, I am not quite aware. But its owner, the rags-to-riches high-school failure K. R. Nagarajan, is in the same league as Tesla founder Elon Musk,  Infosys co-founder N.R. Narayana Murthy and the now-disgraced beer baron Vijay Mallya: their own personalities ooze enough news media traction to spin stories.

It turns out that N.S. Textile Mills, which owns Ramraj, has a back story more fascinating than the one I knew already. One version says Nagarajan was stuck with a stock of veshtis worth Rs 85,000 after a failed joint venture in Coimbatore, and accidentally discovered a market for the product on a visit to Rayalaseema in Andhra Pradesh. He turned farmers into weavers, khadi handlooms into high-quality cotton, shifted from wholesale to retail based on contract manufacturing — and above all, went on to build a brand, insisting on premium pricing.  But in a video interview he says he went out to help shirt-less weavers lead better livelihoods with higher wages and started his venture with a mostly borrowed capital of Rs 85,000. He says his premium pricing helps weavers get fair wages while emphasizing on quality.

Whatever the detail, Ramraj became a big brand as he nurtured what he calls a “veshti culture” with various initiatives focused on lasting quality, comfort and enhanced social status. Ramraj’s website will make a fine case study in how to showcase a socially connected brand.  He is not much known outside Tamil Nadu but a happy coincidence of the worldwide rise of Tamilians in software and information technology has created a new opportunity for Ramraj.

Nagarajan says even his family members refused to come out with him when he wore a veshti, and he has fought to raise its social status. Ramraj ads show men wearing starch-white veshtis getting a salute in a 5-star hotel.

Then the innovations happened. Veshtis are difficult to tie, and the trouser generation does not like the idea of wearing stuff without pockets. Ramraj innovated  first with white belts to hold the veshti and later with stick-on velcro and a catchy Tamil slogan “Ottikko, Kattiko” (Stick it, tie it), and introduced pockets that carry mobile handsets.  Filmstar models, fancy YouTube videos  and events like the annual Dhoti Week (shrewdly preceding the Pongal festival) complete the picture.

When I was tweeting about Modi’s veshti last week, I found people chattering about whether it was one from Ramraj — given the difficulty of tying the wraparound. It confirmed how a brand can gain traction when high-profile news meets its core values and differentiator.

Be the first to comment on "The Veshti Revolution: How a rural Tamil Nadu brand gained from the Modi-Xi summit"