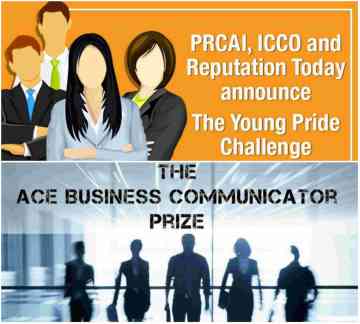 This is a programme we began in 2013 and are going strong with. We have honoured four PR consultancy professionals and then last year moved to honouring a team. We have had three in-house communication professionals that have been honoured so far. Here is the list of the previous winners:

Last year we collaborated with several partners to make possible the grandest prize ever.

This year we launch the initiative earlier than we did in previous years to get done with the submissions before the awards seasons starts in April. Professionals under 35 have time until March 31st to submit nominations.

There are two separate cases. One for a two-member team from a PR consultancy to tackle and the other for individuals from corporate communications to submit a response to. The details for the Young Pride Challenge and the ABC Prize are online.

The team from a consultancy that wins gets an all-expense trip to the ICCO Summit that takes place in October first week in Dublin, Ireland courtesy ICCO, PRCAI and Reputation Today, whereby PRCAI takes care of the flight tickets and visa cost for two persons (approx. Rs 1,50,000)  and Reputation Today takes care of the accommodation allowance for upto three nights (approx Rs 30,000) and ICCO sponsors the registration for two individuals, worth $1000 each (approx)

The ABC Prize is supported by seven organisations/individuals as follows:

Professionals have time until March 31st to submit the response to the cases provided online. Participation is free and all those who participate also get complimentary accommodation (2 nights at Ibis Styles) if they choose to sign up for the Manifest – the Reputation Management Retreat in Goa.

A three-member jury to be announced in mid-April will evaluate the entries in April and the winners will be announced at the Influence Now Communication Conclave in Mumbai on May 30th so they get adequate time to make arrangements and plan their travel in October.

The prizes for three people are worth close to Rs 5 lakh in total and are possibly the most rewarding prizes in the world of Public Relations.