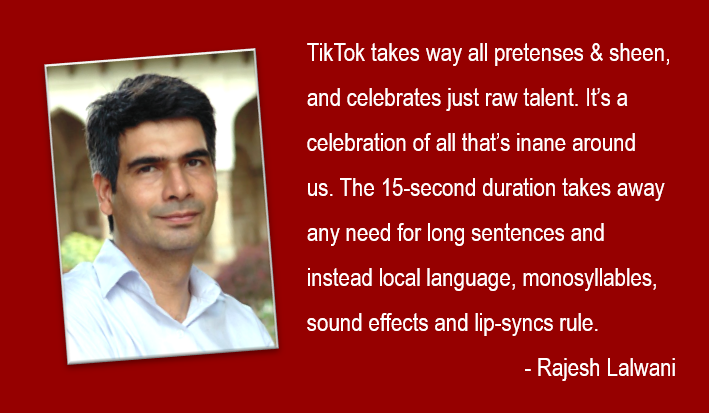 A young girl is pretending to smoke a cigarette. A young guy, purportedly her boyfriend, is advancing towards her and raises his hand threateningly, as if to slap her, but breaks into a shy smile as the supposed cigarette unfolds in the girl’s hand to reveal an ‘I Love You’ message.

You cannot see TikTok with a straight face. That it is a bit jarring is why it’s so engaging.  It evokes an emotion out of you – you either love it or you hate it, but you cannot ignore it.

Every video is 15 seconds but you could be glued to the screen for hours as video after video roll out – of common people – a plain Jane instantaneously transforming into a beauty queen; a housewife in a cotton nightie showing her dance moves; a body builder flexing his glorious muscles; an Indigo flight attendant lip-syncing a Hindi movie dialogue; someone is singing a song; another is enacting a comedy act. Of celebrities – signing autographs, taking us back-stage as they shoot their latest gigs. TikTok is truly egalitarian, except, interestingly, the stars have followed the masses this time around.

Launched in 2017, it wasn’t until earlier this year that TikTok really went mainstream, got itself into legal trouble, and has since gone on to become an even bigger phenomenon. The platform already has over 200 million users in India, that’s nearly 30% of its global active users, and approximately 40% of these signed up in the first quarter of 2019.  It’s fascinating to see the hockey stick growth that the platform has achieved in a really short time.

Social media democratised content, but it was still tilted in favour of the educated classes, the powerful, and the connected. The masses had access to the same platforms but didn’t have the same command on the language –they couldn’t really write elaborate blog posts, write meaningful commentary, or craft concise but powerful Tweets.

And then, the language changed. This new language was video. Video took over the World Wide Web a couple of years ago and every platform moved its focus from text to this new engaging form of storytelling. Rampant mobile proliferation had already delivered a mobile to each hand. This coupled with cheap data AND a powerful camera and hi-resolution screens, in even the entry-level smartphones, now set the foundation for creative expression, and viewing, by masses.

Every household in India is forever glued to TV serials and Bollywood, watching our stars perform stories we’ve always dreamt ‘we’ could be a part of – enact.

That it possible to achieve star like fame we’d already experienced with phenomenon like the Dancing Uncle or the Chai Pilo Lady, time was ripe to try and take away the ‘per chance’ from these success stories and make it ‘by design’.

Enter TikTok – it gives each one of us exactly that opportunity, to convert scenes from our life into our very own movies for the world to watch.  Imagine you are sitting in a middle class household and the television is playing – except, instead of watching, everyone in the household is playing a role on screen – on the mobile screen.

With a dedicated audience for each genre, numbers are guaranteed. No wonder then young girls and boys are competing with stars and starlets – many clocking number of views and fans that run into millions.

TikTok takes way all pretenses & sheen, and celebrates just raw talent. It’s a celebration of all that’s inane around us.  The 15-second duration takes away any need for long sentences and instead local language, monosyllables, sound effects and lip-syncs rule – the limitation of time, actually serves as an advantage.

There are concerns around pornography, safety, fake news and inflammatory content, true for any other social media platform, but particularly vital for platforms that penetrate deep into the country. This is likely to remain work-in-progress for not just TikTok but the entire fraternity.

Creative community is taking note of TikTok’s storytellers. Brands and Creative Agencies are getting ready to leverage the platform – get set for the plain Jane holding her favourite shampoo bottle; the body builder touting his favourite whey protein brand. These are the new influencers, not just reaching out to their communities, but also making money.

I compare the phenomenon to India’s 1983 win at the Cricket World Cup. The win, many believe, weren’t just a win at cricket, but gave the whole country a new confidence that it can succeed at the world level. The masses have dropped their inhibition. Many are already stars. Many stars will find their way to other screens – TV, Cinema.

In a flat world, sky is really the limit.

The views expressed here are those of the author and do not necessarily reflect those of Reputation Today. 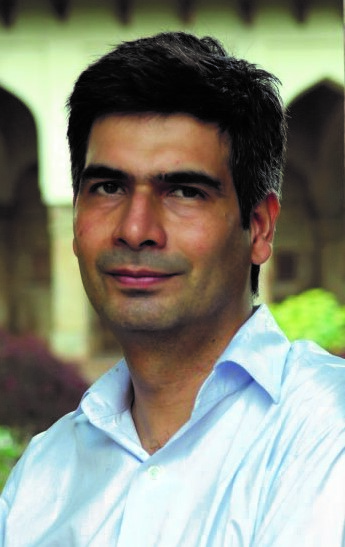 Rajesh Lalwani is the CEO & Managing Director, Scenario Consulting, a consulting firm focused on creating brands for a connected world.