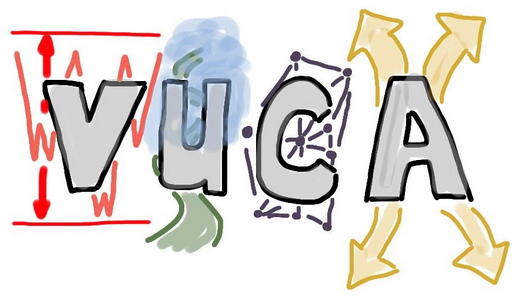 Originally coined by the US military to describe battle situations, ‘VUCA’ (Volatile, Uncertain, Complex and Ambiguous) is increasingly being applied to the communications function.  Here’s my take on what it means to the way people are sharing and receiving information and its implications for chief communication offers (CCOs).

The role and definition of external communications as some sort of ‘long tail’ to marketing is well and over; today, CEOs are required to communicate whether or not they have ‘news’, irrespective of the state of their business, regardless of whether they are promoting a particular product or service.

The reality is that even the most connected communicators can no longer expect to ‘set the agenda’ or ‘drive messaging’; their role is about anticipating, exploiting or mitigating any given agenda.  We’ve moved from ‘inside-out’, to ‘outside-in’ communications; relating to the World’s conversations, hopes, aspirations and concerns.

These shifts are compounded by a media environment subjected to unprecedented levels of disruption from social, technological, and financial pressure.  Here’s my take on ‘communications VUCA’, what it means and how to survive:

Traditional media is being disrupted in real time

First, alternative media models; the fastest growing segment of local media is ‘hybrid’.  Today, such titles operate across India (including Quint, FirstPost, YourStory etc); they behave like newspapers in some respects (professional journalists generate, moderate and curate content); but like social media in others (content is dynamic, much is crowd-sourced, it tends to be image/video driven and sharable).

According to The New York Times, nearly half of US adults rely on Facebook as their principal source of news, while the Huffington Post recently defined Twitter as “the 21st century’s newspaper” – either way, the process of defining and validating news has been delegated to the ‘crowd’.  Beyond simply sharing news, individuals are adding their own editorial comment and perspective to stories and 85% of people trust content made by others more than they trust brands.

C-suite expectations of the communications function

Irrespective where the communications function resides in a company’s hierarchy, the link between its reputation and its business performance are now indisputable. According to the Reputation Institute, 56% executives describe reputation as a ‘high priority’; 63% believe that a company’s external reputation has an impact on its financial performance.

The C-suite wants a business return from their communications; can reputation help to reduce their cost of capital, recruiting/retaining great talent, engage decision-makers?  Can communications help to anticipate and mitigate risks? Can relationships be forged that serve both objectives?

Post protagonism; it’s not about the brand any more

The rise of peer-to-peer news and the emergence of favourites, lists, filters and – most of all – ad blockers have created a new dynamic; brands can no longer assume monopoly of the conversation.  59% of smartphones in India come equipped with adblockers as standard, the latest version of Web browser Chrome now comes equipped with ad filters . . . people do not want to receive content that is irrelevant or of no interest. And they no longer have to . . .

Given a choice between news about brands, or about them as individuals, the latter would win every time. Today, a brand’s biggest enemy is no longer detractors . . .  it’s indifference. . .

The brand as a media company

The universal currency of influence is no longer ‘media reach’ or ‘spend’ . . . it’s relevance.  Relevance is the critical element that makes brands a part of people’s everyday lives, whether in a professional or a consumer context. Only brands which take the trouble to find out about what their customers actually care about, and make themselves relevant to the same, will be included in people’s conversations.

The CCO’s role is evolving from being an ‘adjunct’ to marketing, to a strategic counselor on how a company is perceived – internally and externally, in good times and bad, when there are products to announce, and when there are none.

As the Arthur C Page Society puts it: “Today’s CCO’s are taking part in the strategic decision-making process  …… as a member of the C-suite. The CCO has to manage corporate reputation and prove its strategic importance as a protector asset generating value …”

In today’s communications battlefield, this is what VUCA means: a way of engaging your audiences . . . every day.

Working from home: Challenges, learnings and key things to take to the new world