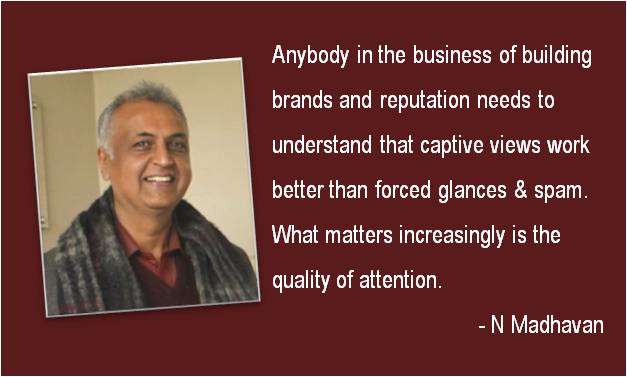 Midnight Masala, in my family folklore, does not refer to the risqué, hip-gyrating song shows that used to feature in late night television but a digestive “churan” that I bought at midnight on a bus ride to the hills of Uttar Pradesh. Those were my trekking days, and the night ride would save me some hotel money and land at a foothill town from where we would reach the upper reaches of the Himalayas.

I remember dozing off during the night ride to be woken up at Meerut (or was it Muzaffarnagar?) by a clever rural salesman who expounded the virtues of the churan, having got my undivided attention. I bought the bottle at a killer price of Rs 5 or something and his pitch had worked so well. My grandmother loved that digestive powder and asked for more.

I was reminded of that this week as I read about how Ola Cabs, known to be a taxi service provider, is actually becoming a media company of sorts with Ola Play. In Ola Play, cars are equipped with a range of infotainment options and enhanced driver assistance. You have a high-definition interactive display and surround sound and you can play pre-buffered high-definition content. In other words, Ola has brought literally down to earth the experience you thought you only had on in-flight service.

Why did no one think of it before? Easy. The technology was not ripe for such a thing, although we have come across upscale cabs offering mineral water, newspapers and a hand towel. Ola’s official spiel is about offering content to passengers and preparing for driverless cars, but the real deal is that long rides give Ola a potential market with captive attention – of the kind I gave when I bought churan that midnight!

This is more important in the age of niche offers based on the “long tail” when smartphone screens are taking away the attention of TV viewers and newspaper readers. What matters increasingly is the quality of attention. Anybody in the business of building brands and reputation needs to understand that captive rides work better than forced glances and spam.

In my long career as a journalist, I once interviewed legendary venture capitalist Vinod Khosla on a long road ride in Bangalore and remember speaking to the head of the current 15th Finance Commission, N.K. Singh, during a shared ride on his car from the then Planning Commission building to the North Block, when he was a joint secretary in the Finance Ministry. I got some quality conversations going during such rides.

As the Internet grows and smartphones and tablets mushroom, any communicator worth her salt must pay more attention to the quality of attention. A two-minute WhatsApp video that is shareable may be to the 21st Century what the 30-second television ad commercial was to the 20th Century. More important, people will not use TV remotes anymore but simply turn their eyeballs to their smartphones – or delete videos or skip over them.

I like to joke often: “A tweet that people read is better than a book that no one ever will.”

William Shakespeare (who else!) famously wrote in Hamlet; “Since brevity is the soul of wit/And tediousness the limbs and outward flourishes, I will be brief…”.

You could stretch the logic to not just wit but an act of communication in which a larger number of people have to be reached with a connection that is not easily guaranteed in the age of devices and options competing for attention.

Even Ola Play has to ensure that its screens offer enough to move people away from the smartphones they are already carrying. On a recent ride, I did not find enough in Ola Play to hold my attention. Those short 15-minute movies that are on YouTube and increasingly shared on Twitter may well be the brevity play for taxi rides. Long years ago I had casually coined the term “cinemoid” (on the lines of factoid) to describe snatches of cinema-like videos to capture brief attention spans.

The fact is that only advertisers seeking to optimise on paid-for air-time have used the short form well. If only all sorts of communicators think like makers of 30-second commercial videos, we would have more interesting content. Because not everybody is as lucky as the boy who sold me a masala at midnight on a long bus ride.

I wish I had explained all this in 140 or 280 characters. But then longer form exists with its own logic.

Be the first to comment on "Wisdom in brief: short form excels in the age of spam"

Wisdom in brief: short form excels in the age of spam