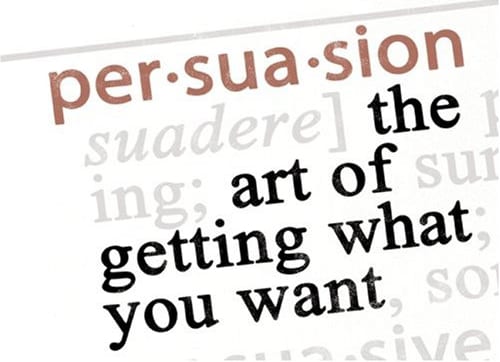 In a COVID-19 world ridden with redundancies and increasing unemployment, I believe that we will see an upsurge of entrepreneurship and new service offerings. Being adept at the art of persuasion will be a key to success while operating in unfamiliar environments. The ability to persuade people to buy into us – our values, ideas, energy and build an effective network, can mark the difference between success or lack of it. Let’s be clear, we are talking of the ethical power of influence, not manipulation. People who can master the art of persuasion are influential, and are the ones with the ability to be the change they want to see.

Influencing others can be very challenging, simply because the very act of attempting to persuade can decrease the ability to persuade. People are suspicious of being influenced and it is possible that an attempt to persuade can badly backfire if people become aware that they are being influenced or persuaded. How is it then that certain people are so incredibly persuasive? What are the skills that politicians, social and religious leaders, corporate visionaries develop and imbibe the art of getting people to follow their vision?

Persuasion is the process of presenting an idea that has the ability to move, provide motivation towards action and create behaviour change. One of the core aspects of persuasion is the ability to create a context, or frame the conversation in a manner that finds favour with the audience and makes them receptive of the offer. It is important to get their attention, ensure the message is processed in the way it is intended to be; and that it relates to the recipient of the message – their desires, goals and motivations.

We are all interested in ourselves and one the first things to learn is how to consistently talk to people about their favourite subject – they themselves. When we get people to open up about themselves, it creates trust and a greater openness to what we have to say.  By framing the message that appeals to their self-concern, effective communicators can create a feel-good environment and facilitate a smooth exchange of ideas.

There are two ways in which we process a message – spontaneously and thoughtfully. Spontaneous processing is quick, direct and often involves immediate action on the message; thoughtful processing is more controlled and involves a careful cognitive detailing of the meaning of the message. In the spontaneous message processing, we often focus on what is enjoyable, or attractive, or has a feel-good effect, rather than on the message itself. Commercials that are often humorous, or automobile advertisements that feature attractive people having fun, driving beautiful cars or slogans like ‘I’m lovin it”; “Taste the Feeling” successfully create a positive effect in the listener. We tend to like things more when we are in a good mood and persuasion is particularly effective when people are happy.

On the other hand, thoughtful processing has the ability to change attitudes and behaviour on a long-term basis. It occurs when we think carefully about how the message resonates with our own beliefs and values – it involves a more meticulous consideration of the validity of the persuasion attempt. The greatest upside of thoughtful processing of a message is that bolsters strong attitudes, which can be resistant to counter-persuasion.  The route that we need to take to deliver a message that is persuasive needs to be chosen on the desired final outcome – whether we want our audience to feel good and act in the moment; or whether we need them to make deliberate choices that can change  deep seated attitudes and behaviour.

According to Robert Cialdini, the author of ‘Influence’, humans are hardwired towards reciprocity. It is very compelling for us to want to do something for others, when they have done something for us. It is part of our evolutionary DNA to help each-other out to be able to survive as a species. This idea can be leveraged by providing small gestures of consideration to others, where they may be compelled to return the favour. We can build our circle of influence by adding value to people in many ways, big or small.

The other factors that create influence and have an ability to persuade people are consistency and persistence. When we deliver consistently in a way that matches people’s expectations or even exceeds it, there is a trust that is created in our abilities and people like to work with those who are reliable. Persistence is the ability to stick to your ideas, endeavours and message in the face of resistance and failure. Persistence, self-belief and the ability to rise against failure generates passion that can set the wheels of change into motion.

However, beyond the framing, passion and messaging, one the most important attributes to create influence and have the ability to persuade is expertise. People defer to those who are known to be an authority in their area of experience. It is important to establish credibility through knowledge, ability to innovate and offer opportunities for people to make good decisions. It is important to let people know of our abilities at the outset of building a relationship so that they have clarity about their expectations on how we could solve their problems.

Being flexible in our approach and behaviour also makes people favourable towards us. The greater our repertoire of behaviours, the more power of persuasion we can have. We should have the ability to infuse energy in people with our behaviours to be able to motivate and invigorate them. It could be through a simple eye contact, energetic verbal responses, or just active listening. Simplicity in communication is also at the heart of the art of persuasion – we must be able to explain our concept or point of view to a young child, who can then communicate it effectively to an adult.

Ultimately, the most compelling and attractive quality in an influencer is confidence and certainty. If we believe in what we do, we will be able to persuade others to do what is good for them. The human brain is designed to respond to confident opinions of others when making decisions.

Remember, influence is our inner ability to lift people up to our perspective, and as author Laurie Buchanan said, “Never underestimate the influence you have on others”.