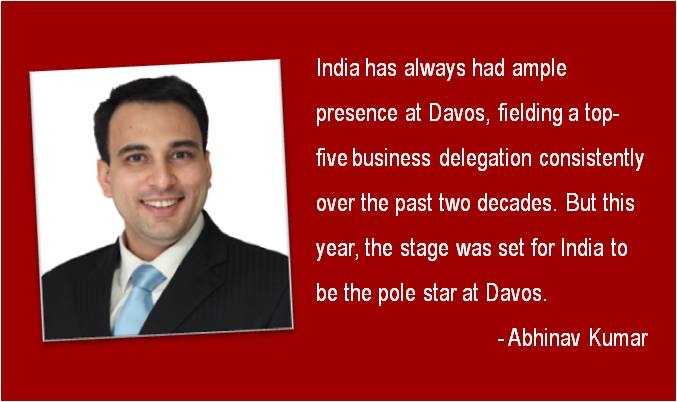 Held annually at the alpine resort of Davos, nestled in the heart of the Swiss Alps, the World Economic Forum’s (WEF) annual meeting is by far the most prominent global assembly of 3000+ CEOs, Chairpersons, Prime Ministers, Editors and University Deans. The “World Leader per square foot” population density at Davos is second to none.

Hence it is no surprise that the Media and PR Business are also out in full force. Over 500 journalists and senior editors were deployed towards this target-rich environment for new content. However, most of all, Davos ends up being a high power turnout of the world’s top political figures, jockeying to push their national brands and narratives. The list of 340 global politicians who attended this year, included over 100 heads of state, of government or of International organisations.

A vital part of the Davos annual ethos is the buzz around a particular world leader, who has an outsized presence and captures the mood of the moment. In 2016, it was Prime Minister Trudeau of Canada with his message of gender parity and in 2017 it was President Xi of China, remarkably defending the global capitalist and multilateral trade system in face of rising populism in the West.

In 2018, Professor Schwab, Executive Chairman of the WEF, pulled a double rabbit out of the hat. He convinced the Prime Minister of India, Mr. Narendra Modi, as well as the President of the United States of America, Mr. Donald Trump, to participate in the event. This marked the first such visit by an Indian PM since 1997 and by an American President since 2000. In one masterstroke, the road was paved from Delhi to D.C. via Davos. 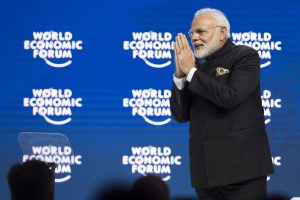 India has always had an ample presence at Davos, fielding a top-five business delegation consistently over the past two decades. But this year, the stage was set for India to be the pole star at Davos. And it did not disappoint. With its Prime Minister conducting the opening plenary and its Republic day being celebrated on the closing day, India brought out its full array of soft power on display at Davos.

Prime Minister Modi’s opening address was the hot ticket sellout session at Davos, with CEOs and Chairpersons queuing up for 30 minutes just to get inside the room. Echoing the myriad of billboards put up across Davos with his visage, his message emphasized India’s revitalised position on the world stage. He reiterated the country’s economic muscle by reflecting on its six-fold GDP growth over the last two decades, and pushing its attractiveness as an investment destination. In his statesmanlike address, PM Modi identified three main challenges facing the global community: climate change, terrorism and the growing anti-globalisation sentiment. He went on to make a historic case of how possible solutions to today’s global problems lay in India’s own ancient millennia old heritage and history, liberally quoting from the Upanishads, Gautam Buddha, Mahatma Gandhi and even Rabindranath Tagore. This made for an inspiring repositioning of India as a major potential force for good and unifying actor on the world stage. To conclude he quoted from Tagore’s poem Where the mind is without fear, countering the 2018 Davos theme of a “Fractured World” with “…where the world has not be broken up into fragments by narrow domestic walls…” 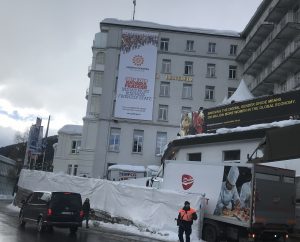 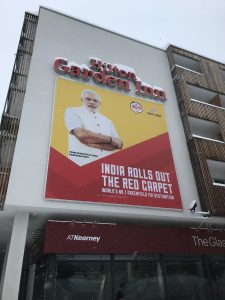 India also hosted the official opening reception of the forum and had a full complement of five cabinet ministers and three Chief Ministers in attendance. Of the 3029 official delegates at Davos, India had the 4th largest contingent (its highest ever) trailing just the United States, the host country Switzerland and the United Kingdom, and ahead of China, Germany, France, Russia, Japan and others. It was a privilege for me personally to accompany our group chairman, Mr. Chandrasekaran and CEO, Mr. Gopinathan, along with the largest ever leadership delegation from the Tata Sons and TCS fold this year.

The billboards that towered over the narrow promenade, the main artery street in Davos, had an overwhelmingly Indian presence – from PM Modi’s face pushing the Invest in India message, to the state of Andhra Pradesh promoting its industries and Tata Consultancy Services (TCS) showcasing the growing role of technology through its #DigitalEmpowers campaign. The crown gem of India’s economy – its IT industry – had an assertive presence on ground. “Indian IT companies in general are presenting themselves in a very compelling way at Davos. Replete with digital forests and digital underwater worlds, TCS’ Davos reception is a demonstration of the company’s aspiration and will to succeed, yet guests are welcomed and cared for in a friendly way as nowhere else.” wrote Horst von Buttlar, Editor in Chief of Capital Magazine in Germany, in his summary of the forum. 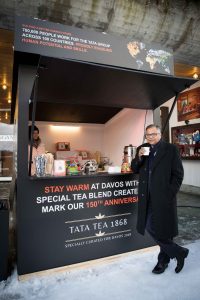 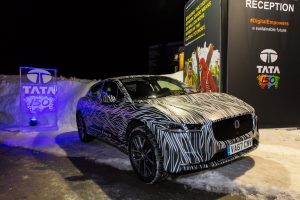 The Chairman of Tata Sons, Mr. N. Chandrasekaran, at the launch of a “Davos Blend” of Tata Tea & the showcasing of the Jaguar I-pace fully electric car at the Tata reception, marking the 150th anniversary of the Tata group.

The main promenade of Davos was also replete with symbols of India’s soft power elements – like Yoga sessions at the India lounge and Masala Chai as well as Kashmiri Kahwa being served by Tata Tea to mark its group’s 150th anniversary. And you could hardly walk two paces on the street without bumping into an Indian TV crew from either NDTV, CNBC, Bloomberg Quint, ET Now or India Today. The CII’s India reception was the single largest reception event at the forum, featuring the 7 Vedic chakras as its central theme. Bollywood superstar Shahrukh Khan was also awarded the prestigious WEF Crystal Award for humanitarian efforts, along with Cate Blanchett and Sir Elton John this year, marking another first. This tweet in his iconic “Switzerland” pose, would have warmed the hearts of many of his fans in the midst of a record snow season at Davos. 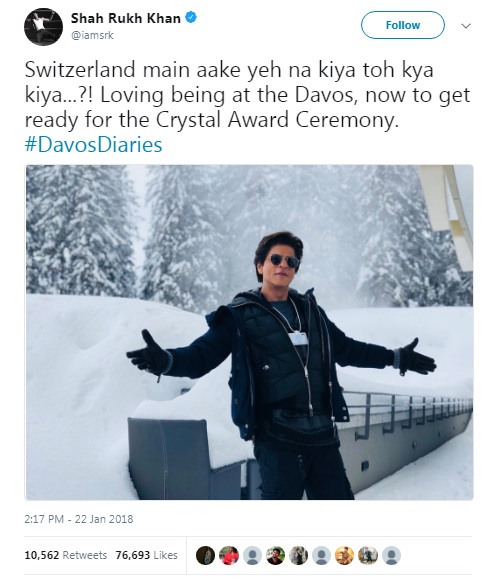 This dominance continued even in the digital world with KPMG’s WEFlive project rating 3 Indians as among the top 4 most influential personalities on Social media at Davos.

Through these gamut of actions, India’s PR efforts have certainly shined at Davos this year and it has also cemented its position as a Top 10 Nation brand in the Brand Finance™ annual list. In terms of reputation, it has also made strong gains in the Country Reputation Index, up by 10.5% and now ranked #33. However, given that Davos’ home country – Switzerland was ranked #2, shows that there are still some Alpine heights left to climb for India, as it emerges as a major player and brand on the world stage.

The views expressed here belong to the author and do not reflect that of Reputation Today. 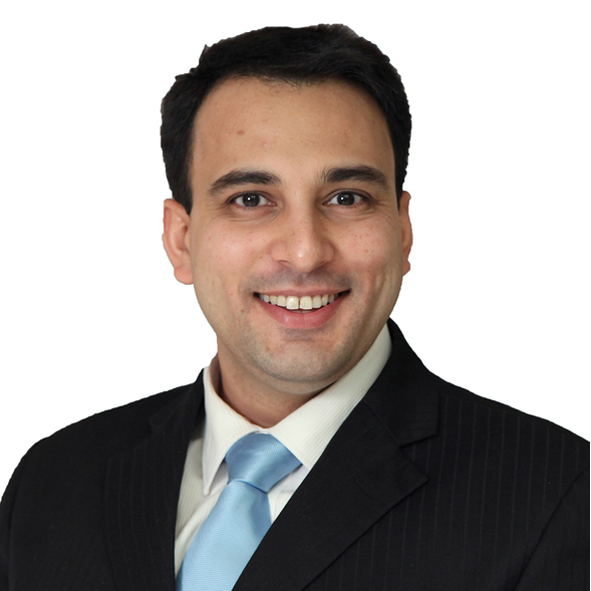 CMO - Global Markets, Tata Consultancy Services at Tata Consultancy Services
Abhinav Kumar heads up the Marketing and Communications divisions for Tata Consultancy Service's 45 country international market presence, comprising the North America, Europe, UK, Latin America, APAC and MEA regions. Recognized with over 70 awards for excellence in communications and branding, his team has established the company as the #1 fastest growing brand in the IT Services Industry from 2010-2020. Under his tenure, the brand value of the company has risen from US$ 2.3 billion in 2010 to US$ 13.5 billion in 2020. He oversees the company's strategic relationships with multilateral organization such as the World Economic Forum and the European Union. In 2019, Abhinav was accorded the SABRE award in London, towards outstanding individual achievement in his career as a CMO. Abhinav has previously served in several leadership roles, including as the CMO for Europe, the CCO for Europe and as the CMO of Latin America at the company. He holds an MBA from the Indian Institute of Management Calcutta and a degree in Economics. He is based out of Brussels, Belgium.
SHARE TWEET PIN SHARE

Be the first to comment on "At Davos, all roads led to Delhi"

#RTPRIMETIME: The Future of Influencer Engagement

The Fake News Virus – A localised infection or a looming pandemic?

Preparing for an interview? Part – II