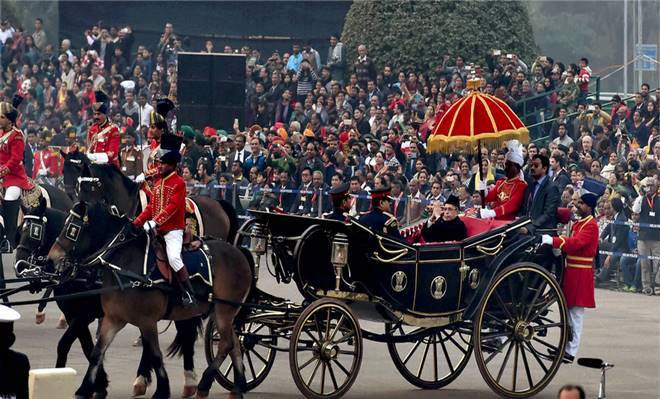 The patriotic theme extended to a fitting finale, which peaked with the Beating Retreat ceremony on January 30. This is indeed, a sight that we are familiar with. A legacy of the British raj, the backdrop of Vijay Chowk ushered in an era of a time gone by. The tricolour, the silhouette of Rashtrapati Bhavan, the marching bands, the pomp and splendour of the military bands, the bugles, the view of the Raisina as the horse-drawn presidential buggy trailed along re-created the atmosphere. Interestingly, it seems President Pranab Mukherjee, has revived the carriage tradition after more than three decades!

This annual ritual, which has a strong whiff of the English tradition, has evolved over time. The  colonial tunes have been replaced with Indian music. This year’s ceremony saw a new feature, a first of its kind –  ‘Yaman’ a jugalbandi, a composition by L B Gurung. Unlike last year, Bollywood tunes were given a miss, on purpose. Perhaps a move, to further  involve the audience.

Incidentally, another legacy of the colonial days, was also done away with – of the Budget being presented at the end of February. So, Feb 1 was anxiously awaited, when the morning brought the news that it may be postponed by a day. But, it did not happen and the Budget was announced with full fanfare. Commenting that the Finance Minister “has strengthened the hands of the poor”, PM Modi said this was an “uttam”  budget. At this point, we are reminded of PM’s Mann ki Baat where he urged youth to smile more, score more, to remain happy and stress-free.

Toeing the line with the patriotic concept, we notice that Rajghat, a historical landmark in Delhi, has been given a facelift. Some memorable quotes from the Father of the Nation – Mahatma Gandhi, some really inspiring thoughts are now on display here. It seems the plan to give the memorial a facelift, had been in the pipeline for some time. It can be seen that over 30 quotes are inscribed at the VIP entrance and other gates, which also have signatures of Bapu and his trademark spectacle!

In fact, though we have got disengaged with post offices, the postman connects every household. Now, they can reach every house for banking activity, bringing banking to your doorstep. The network of post offices can make it a reality, Jaitley observed.  With the presence of  almost 1.55 lakh post offices in the country, the postmen will function as banks giving a major push to banking.

So, we can see potential forces impacting here. A need for change, which does open up opportunities for expansion and participation in the new economic activity. It works around their efforts to engage their stakeholders, build their network with the changing times. This move, actually is aimed at spelling out how Indian Post will meet the needs and the expectations of the customers, so that it can retain their trust and support, as well as regain lost ground.

Talking of services, pizza delivery boys in Delhi got lessons in safety recently. We know too well, that to ensure that you do pay for your pizza, delivery boys often break traffic rules to reach on time by jumping red lights, speeding and driving in the wrong lane, etc. Since road accidents related to food deliveries have caught the police’s attention, the Delhi Traffic Police organised the Road Safety Week. They ensured that delivery boys were part of the awareness programme. To spread traffic awareness, a bike rally was organised at India Gate. The focus of the drive was on helmets and the police distributed free helmets too. They maintained that it won’t be appropriate to call this a celebration of road safety, unless the number of road accidents drops down to nil. So, now we can expect these pizza delivery boys to take care and be wary of traffic rules. After all, it’s a matter of refining service and, their own safety!

Be the first to comment on "Breaking free from old legacies, refining service!"

Who is your role model?