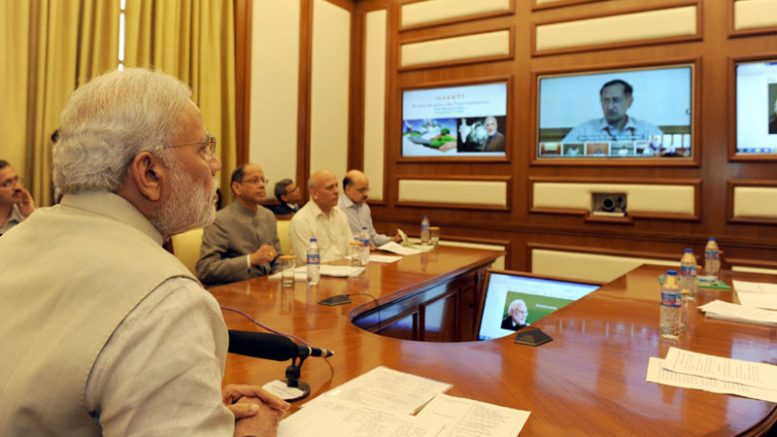 Exactly five years ago Modi’s campaign was in hyper drive. He was an in your face, underdog contender. At this time in 2014, he was doing Chai Pe Charcha (speaking to people via video in over 1500 locations across the country, 50 of those abroad and 30 of those where people could speak back to him). He was digitally present in over 200 locations almost every other evening, appearing as a 3D hologram, while physically speaking from a studio in Gandhinagar. At this time he was about to embark on Bharat Vijay Rallies – 100 rallies in the month of March 2014 alone, and his speeches were being broadcast on screens mounted on 300 vehicles running across media dark areas of UP. We don’t see any of that (yet). Now, he’s inaugurating public infrastructure projects, shaking hands with the disabled, promoting sports.

We don’t see a stark change in his strategy, from lets say, last year. Because his strategy today is what started the day he took office, with the goal to get re-elected. Since he has been in the PMO, he’s been playing the part of a PM, more statesmanlike. Tactically his appearances have become more common and his narrative more direct and offensive. He has used his position of power, and the resources it begets, extremely well.

Some even hypothesise that Modi has changed the very nature or PR and how it is practiced. We find it easy to attribute some changes we see to Modi or Modi govt. But that’s hindsight, and correlation ≠ causation. These changes are PR’s natural evolution. Having said that, IMHO sense of nationalism and honouring the armed forces seems to be occupying more mindshare for consumers and brands than it has before. That can be attributed to a right wing government being at the centre. Here are some of the change in foci that the last five years of political ecosystem seem to have inspired:

The biggest driver of these trends is likely the advent of digital media.

With information extensively at the fingertips of almost every Indian, the value of news coverage is not just measured in its print avatar, but the online traction it garners as well. These media also offer incredible speed, share-ability and shelf life of PR output.

For politicians, it is more than just numbers and volume. India has the world’s largest ‘young’ voter base (who mostly like to be active on mobile and social). An estimated 100 Million Indians will be eligible to vote for the first time in 2019, and the number of Indians under 35 years will clock 600 Million. Harnessing power of new-age media is not a question of prospering for political entities, it’s a question of survival.

One notable manifestation is that there are several online-only publications that have been at the forefront of political coverage, with exclusive interviews with senior politicians. And lately, there’s been an increased effort by online portals to actively seek out interviews by senior politicians. Though small for the time being, some of these are founded and/or managed by folks who are well connected, and can make such interviews happen. Although Print and TV still remain the media preferred by most politicians, senior politicians are happy to be interviewed by these “smaller” online publications, despite their size or novelty. Because they recognise the value of their focussed coverage and because they love attention. It is fuel to their candidature, and they won’t miss out on it, no matter how small the publication.

Has this government’s approach towards PR changed?

This government started on the backfoot against the media establishment of the time, which scrutinised more than the previous governments (situation seems to have changed over time). That has defined this government’s approach towards PR and media; which has been largely defensive. By and large: Media interface has been divided amongst politicians, and bureaucrats. The former handle stories that are successful, populist and/or political in nature. The latter handle more mundane (read-not sexy) issues.

How do corporate entities compare with political entities, especially with regards to responding to a changing media ecosystem?

Yet, there are many strategies and tactics that politics has acquired from the corporate world. From professionalisation of some expertise to the way processes are developed, adopted and optimised. More and more political entities have become comfortable with hiring PR consultants to help with their mandate. Consultants do have to calibrate their style of working to suit political dynamics (more uncertainty, unstructured information sharing, grasp of local language, ability to manage colossal egos)

At the same time there are some learnings that can be transferred back.

Here is what corporate entities can learn from how political parties run their PR strategies:

With this I finish a year of State Craft. Besides my friend Anubhuti Mathur, The Editor of Reputation Today Magazine, who has patiently helped me on these posts, it’s difficult to know how many of you have read how many of my pieces. But I would love to hear from you on which one of my writings you have liked the most, which you haven’t, what you feel could be different and what you think could also be covered. Reach me on Twitter @HemantGaule

Creating a buzz around company announcements

Juicy controversies: Guess what ITC’s new brand and Arvind Kejriwal have in common?

Defining Public Relations for the future and creating a Council