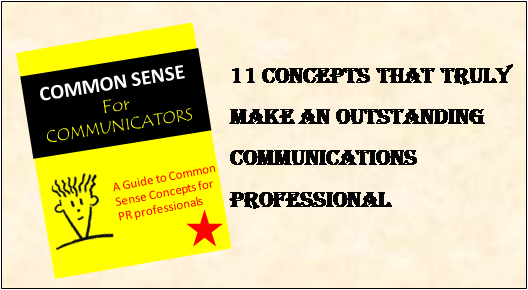 This week marks the mid-way point of the nine-month classroom training being imparted to the first batch of SCoRe in Mumbai. The programme formally began on August 1st and runs until April 30th before the students go for one or two internships. I have been teaching them at the beginning of each month and one of the things I have been talking about is the four essential requirements of a PR professional. I have told them about three and will teach them about the fourth element in January. The two basic attributes a PR professional ought to have are Writing Skills and Researching Skills – a large part of the latter will come for exploring and reading. The third skill I have been telling them about is COMMON SENSE. Last week, during my last class with them for the calendar year 2016 I elaborated about this commonly used phrase and I thought of sharing the same here because these 11 concepts truly make an outstanding communications professional. Some of these are part of the SCoRe values. These attributes are essential in most service professions but in communications and PR they are much needed.

Courageous – a communications professional must be courageous. There will be occasions where you will need to be firm and assertive. Absence of courage will be detrimental to ensuring a task is completed with success.

Open to Learn – People who stop learning invite failure. This is all the truer in Public Relations where innovation is key. The more we learn, the better we are at offering counsel and executing with smarter ways. Learning does not stop.

Mindful – I sometimes interchange this with magnanimity. Public Relations professionals must be caring. And this takes various shapes and forms as per the need of the hour. Empathy is key in the way we execute plans that reach out to various stakeholders.

Multi tasker – A communications professional should be a juggler. There are multiple things going around at the same time. Speed is of essence. Multi-tasking comes with clarity of mind and an eagerness to do things right.

Outstanding – This word is difficult to explain. In simple terms, this is the quest for excellence. To be the first and best all the time. A good reputation can be built by not just doing the right things but by doing everything right.

Never say No – A communications professional is sometimes like a waiter. There are multiple stakeholders to serve. A client, a media person, the boss and sometimes government officials. Unless the ask is unethical, responding with a negative is not an option.

Street-smart – There are smart people, there are super smart people and there are over smart people. But in Public Relations one needs to be street smart. It means being an organised go-getter and resourceful in pulling things off.

Ethical – This does not need explanation. All mature adults understand the difference between good and bad, right and wrong, legal and illegal. When making, hard choices choosing the former is all it takes. Ethics is not the only thing. It is everything.

No nonsense – Very often we get distracted by an unreasonable stakeholder who at times has to be dealt with using kid gloves. But as Public Relations professionals we should neither encourage nor create nonsense. You figure that out!

Straight forward – Sincerity, honesty and truthfulness are the cornerstones of trustworthy and transparent people. The only way to do that is by calling a spade a spade and doing that in a style that does not ruffle feathers.

Eye for Detail – An attention to detail is paramount to any campaign. Public Relations is a collection of campaigns that have to be done right from planning to execution to evaluation. A spark neglected can burn the house.

Why does IndiGo no longer take pride in its reputation?

Likeability and ability are two important factors for partnerships