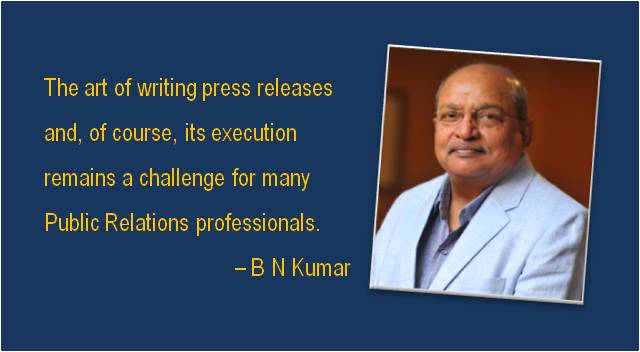 For PR veterans it may sound elementary, but for many other professionals it still remains a challenge. Yes, I am discussing the art of writing a press release and then ensuring that it gets carried by the target media.

PRact, the joint initiative of PRCI and Indian PR Forum, has recently conducted a workshop on The Art of Press Release Writing at Mumbai Press Club with over 60 professionals, including some journalists attending as paid delegates. The context was, as we discussed in my last column, the World Communicators’ Day which PRCI celebrates around October 28 – the day the world’s first Press Release was shot out.

As the delegates heard PR veteran and former Air Indian executive director Jitender Bhargava and senior journalists Gurbir Singh, Dharmendra Jore and Rajesh Kurup, (apart from yours sincerely!) many professionals sprang up and bounced a volley of questions. Most of them had the same complaint: Why aren’t our press releases being carried out by the media.

The speakers analysed the issues and told the audience frankly that most press releases end up trash cans as they are either irrelevant or they do not say anything new. In short, they discussed the importance of the news value – which in PR parlance means you have to convey something new. There is no point in issuing a Press Release just because the bosses want it or the clients desire so.

This brought up the core issue to the fore: many corporate bosses need media familiarisation to bring them up-to-date on what makes news and what gets carried. Our team leaders and clients need to shed the I-know-it-all attitude. For instance, awards do not make news and at best they can be sent to online medium.

This does not mean that the relevance of a good press release is lost over the years, since 1906. A Press Release still continues to be the most important tool to convey the news to a larger audience and even to meet compliance issues of a listed company.

At the risk of repetition, I must mention that the workshop’s key messages for a good, usable press release were: Good catchy headlines, strong bullet points that give a gist and an introduction that states the most important points. PR professional may not have writing skills of a journalist, but he or she could at least try and learn from what the media carries and how.

In this context, seniors and team leaders in PR firms have a big role to mentor. PR people are often put to pressure so much that they dash out press releases to irrelevant media. A PR man recently called up a resident editor of a financial paper to know if the press release will be carried! Can anything be more disastrous than this? An infra journalist the other day complained, rightly so, that his inbox gets spammed by releases on education which is obviously irrelevant to him. Obviously, the concerned (un-concerned, in this case) team leader hasn’t checked the media lists that his mates maintain. Is there any point in blaming the poor PR teams for not being able to get results from their media contacts?

The senior journalists who spoke at the workshop also pointed out that language is the biggest victim as most releases are bad in grammar. They also describe the history and geography of a company rather than conveying what is current and, more importantly, what is new!

Rajesh Kurup said there was nothing wrong in following up on a press release issued by a PR professional, but it should be at the right time, and not when the reporter is busy filing his stories in the evening.

“You guys say you sent a press release and we in the newsroom ask: so what?” he said stressing on the importance of justification of a release.

The delegates were happy that the workshop helped them in talking directly to senior media and PR professionals and learning from their experiences – an opportunity that they do not get in their offices.

Media friends often say PR guys do not send proper press releases but, at this PRact workshop, journalists patiently explained as to how to do it!

PRact received requests to conduct such workshops in other cities. We shall, in due course.

Be the first to comment on "Garbage In, Garbage Out!"

The political tug-of-war, and a robot cop