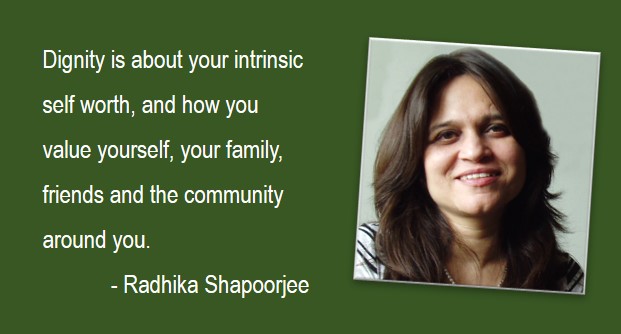 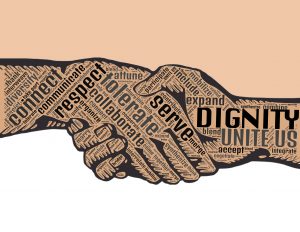 What does dignity mean to you? This was a question that I asked a group of doctors and nurses at CanSupport, an NGO that provides free palliative care for cancer patients from the poorest sections of society. As a member of the CanSupport Managing Committee, I was conducting a team-building exercise for the doctors and nurses, and it was important to understand, what dignity means to the people who provide it selflessly to others.

The fact is that dignity is about your intrinsic self worth, and how you value yourself, your family, friends and the community around you. And I had heard inspiring stories about how these wonderful human beings help their patients to cope with Cancer, which you all know is a scary and debilitating disease.

Cancer patients require huge amounts of money, care, and a support network, to help them cope with it. Unfortunately, many cancer patients are simply abandoned by their families and friends. Doctors and caregivers, like those at CanSupport, become their lifeline to deal with the disease, especially during the last stages.

The biggest gift that they give their patients, is dignity during the last stages of their life.

Mynoo Maryel, Spiritual leader and Founder of the World Dignity Forum, has this to say about dignity:

With cancer patients, their dignity is constantly challenged, and those involved in palliative care, help reclaim, preserve, and reignite their dignity, to whatever extent possible.

These simple questions force us to look at our own self, and it is interesting to note, how most people have forgotten their own identity, and have lost touch with who they really are. Their identity gets merged into the multiple roles they play, and even gets completely lost at times.

The Meaning of Dignity

When asked specifically, “What does dignity mean to you?” each person came up with “Respect”, “being kind”, “compassion”, “self-worth”, and “how you value yourself and others”.

Elaborating on their choice of words and phrases, each team member shared a story about dignity, and the role it played in their lives.

As they heard each other out, they realised that even though they’ve known each other for years, they were actually listening to each other for the first time. As the session progressed, they started feeling new-found respect for each other!

They also shared personal stories about how they lost their dignity. Stories going way back into their past: of betrayal by friends in college; of humiliation at the hands of a teacher, parent, or partner; and of being ill-treated by family.

Like most people, they were carrying their pain, anger, humiliation, and resentment around for years. They were taking it to work, taking it home, and carrying it around wherever they went as father, daughter, boss, or friend. But as they shared their innermost feelings here, and realised that they weren’t alone in feeling the way they did, they ended up unburdening themselves of the indignities they faced.

Most people never talk about the indignities they face, because they have been taught to hide their feelings. But their pain comes out in different ways, and leads to suspicion, anger, and conflict.

Sharing honestly, and creating an environment where people feel safe to share, helps unburden individuals and society, and helps bring back dignity.

Drawing a parallel, we recognised, how life has forced indignities on those suffering with terminal cancer, and how these very doctors, nurses, and counsellors, were creating a safe environment of kindness and care, and bringing back dignity into the last precious few moments of their lives.

This realisation brought about a renewed sense of immense gratitude for the life they have, and enthused new energy into their work.

This realisation also highlighted the importance of dignity, and the need to consciously strive for it in every aspect of life. Which led us all to take a Dignity Pledge (an initiative by The World Dignity Forum)

“I will do one act of kindness every day that will honour and preserve Dignity of the Self, Community and the Environment.”

In conclusion, dignity is about your intrinsic self worth, and how you value yourself, your family, friends and the community around you. Once you value them, and make it a habit of caring about not just things close to your heart, but also about respecting the larger environment of neighbourhood, society, nature, and everything around you, the world will slowly but surely heal, and be a better place to live in. 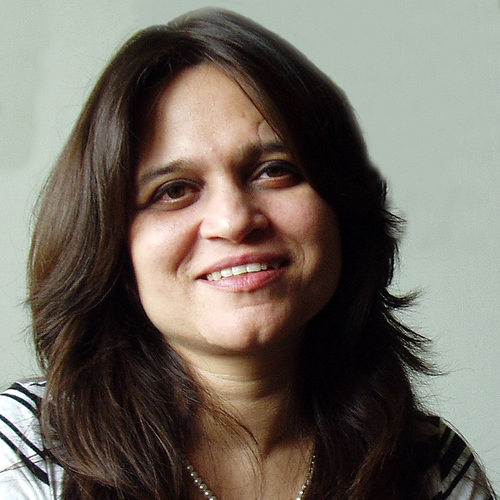 Consulting Partner at Digital5
A seasoned communication leader with three decades of professional experience across Advertising, Public Relations and Corporate Communication, Radhika has held senior leadership positions in top global communication consultancies and created award-winning campaigns across multiple sectors.
She has worked as a trusted advisor to CEOs, Governments, top lawyers, litigation experts and political leaders.
A prolific public speaker, moderator and writer she has been a jury member for multiple international and national awards including the prestigious Cannes Festival of PR and Advertising.
SHARE TWEET PIN SHARE

Be the first to comment on "The healing power of Dignity"

Communication will stand on its own in 2020, and beyond!

Want a career in Public Relations? Here is what you must know

Ask, but don’t ask for