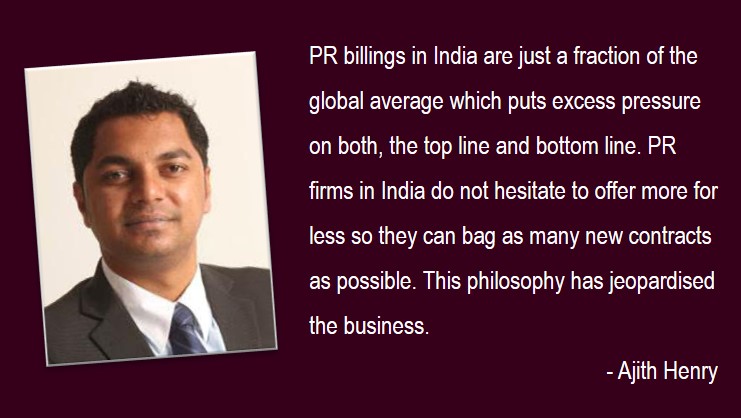 It’s really time for the Indian PR business, the consultancies in particular, to recognise a huge problem with the way they do business. In fact, it’s far past time they caught up with the international pricing, whilst adopting the sophistication and maturity of managing growth.

What strikes me the most is the fee that the consultancies in India peg themselves at. Average PR billings here are just a fraction of the global average which obviously puts excess pressure on both the top line and bottom line. For a mid-size consultancy in India, anything above INR 500,000 (US$6,900) is considered an above average monthly retainer which often necessitates an army of dedicated resources, and of course the mounting client expectations which the consultancy members go above and beyond their call of duties to satisfy.

This when compared to reasonably established markets like Singapore or Dubai would fetch an average retainer of USD 15,000-16,000 a month which typically requires a resource allocation of an Account Director, Account Manager and an Account Executive, spending about 25-30 per cent of their time. A client that pays anything above USD 25,000 (INR 1.8million) a month usually receives some eternal gratification of the management in these markets.

Sure, India is no normal PR market that is quite diverse and complex. So is China, perhaps an even tougher market that has recorded revenues of over USD 700million in 2017, which is roughly half of the UK market that boasts a valuation of whopping USD 1.78 billion.

In comparison, India’s total market revenue stands at USD 165 million. In other words, the country’s market size is just 20 per cent of the total Chinese PR market, and less than one-tenth of the UK PR scene.

With almost similar business conditions and the number of firms operating in both countries, how is it that China is five times bigger than that of the Indian PR scene? You don’t need an expert to tell you that the answer lies within billing. The reason? The Chinese PR market was established by the international biggies who brought along the value, breadth, and diversity, which ultimately yielded high income. Homegrown firms then followed suit in the market in keeping with the international best practices, and not entering into a price war strategy. Case in point is BlueFocus, a publicly listed PR firm in China that commands a leadershp position in the market.

Unlike in China, the Indian PR business was set up by local firms who did not – and continue not to – hesitate offering more for less so they could bag as many new contracts as possible. This operating philosophy has jeopardised the business that is simply trying to squeeze consultancy practitioners to produce beyond their capacities. It’s a matter of survival out there.

Then there is the issue of quality talent. Let’s face it – the profession doesn’t necessarily attract the best of the talent, simply because it doesn’t pay enough. How do we pay them if our income doesn’t allow us to do so?

The antidote? Undoubtedly, it is higher billings. But, the business ‘gurus’ that have failed the market for more than three decades – are they willing to own up their mistakes and say, “enough is enough. PR in India isn’t at a discount anymore.” 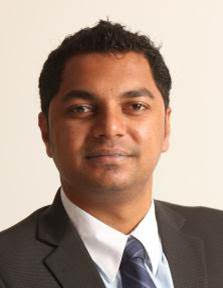 Ajith has spent considerable amount of time in leading international PR firms in India and the Middle East. Views expressed are solely his own and do not represent the views or opinions of the organisations that he represented.
SHARE TWEET PIN SHARE

Acquire, Retain, and Repeat — My guide to Account-based Marketing (ABM)

The healing power of Dignity