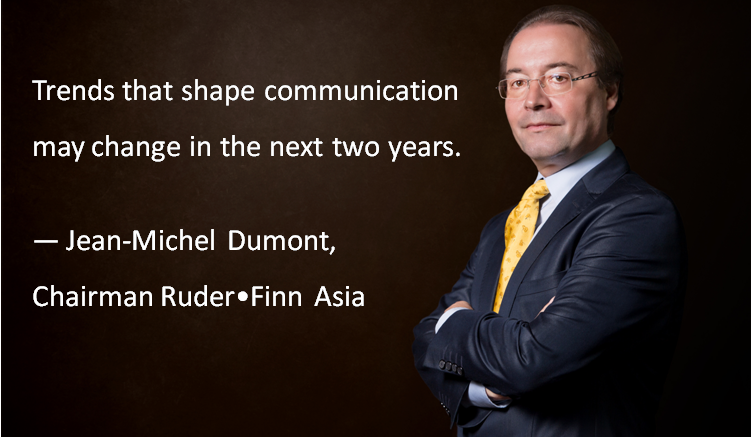 JEAN-MICHEL DUMONT, Chairman, Ruder Finn Asia was in the capital in the first half of June and Reputation Today caught up with him.

2016 clocks his 30th year in Public Relations in Asia. No small achievement.

As Chairman of Ruder Finn Asia, he is responsible for the growth and development of Ruder Finn Asia, devising Asia-wide strategic direction for Ruder Finn and setting the tone on how the company’s business is managed. His expertise has helped Ruder Finn become one of the top 3 international PR consultancies in the Mainland China market and a recognized leader in several areas across Asia including luxury, corporate and CSR programs.

He talks to Shree Lahiri about how building a strategy is the real challenge; how PR has a story to tell – it was under-recognised and how it is changing today to real consultancy. He observes “communication is key, with CEOs appending 80% of their time communicating – internally and externally”, and looking into the future declares, “I see future CEOs coming from PR”!

Qn: Ruder Finn had opened its first office in India in 2011, with its head office at New Delhi. It’s five years now. How would you describe the journey?

Ans: It was a great journey; it was everything we expected from the Indian market. In fact it was even better! It was really interesting focusing on doing good work for our clients, colleagues and building our team, which is critical for the company. We’ve been working with CEOs, different governments, even a Nobel Prize winner like Kailash Sathyarthi. We have had the opportunity to work at this level which is very gratifying for us. There has been a lot of work on media advocacy, policy changes, represented Novratis during the crisis, worked with Kailash Sathyarthi on Child Labour Act and more.

Qn: At the launch, you said, “The Indian economy has benefited from robust domestic demand and a revival in investor and consumer opinion. Our clients realise the necessity to expand their communication capabilities in this era of exponential growth.  With this new office, Ruder Finn will continue telling the vibrant stories of our clients across a range of national and regional media.” Looking back, how has your storytelling been?

Ans: It’s been really interesting. We managed to expand stories to India and develop new stories, telling stories traditionally and through social media. It’s been a good client turnover for long-term basis. So, we have been building stories from the past, one step at a time.

Qn: You had called India, this year’s “hotspot”, and Singapore, which was 2014’s fastest-growing geography, could drive much of that expansion. Could you explain the thought behind this?

Ans: Over 2015 to 2016 we have seen over 60% growth in India, which has been pretty respectable. I would say, it’s good overall, consolidation of clients and synergy from different areas. One clear fact is that India is in the maturation stage with many opportunities coming up. Working in smart cities, technology, energy – areas, which promise the biggest growth potential today. It’s fascinating, because this is the future.

We continue to focus on FMCG, luxury, automobile and are looking at this direction. Singapore’s growth mainly managed to position itself as a hub of 600 million people in SE Asia. Our growth stands perched on three feet, embedded in China, Singapore and India. I want India and Singapore to be the growth areas for us, especially after the China slowdown.

Qn: Ruder Finn’s growth average in Asia has held a steady pace of 25 per cent since 2001, but you had noted that 2014 turned out slightly lower. How has the last financial year been?

Ans: The growth in 2015 had slowed, but it is still in double digits. The whole region (Asia) was short of 20%. News about China slowing down may have an impact globally. But, in our case, there has been new clients, new businesses and I can say that last month was an amazing month!

Qn: When you launched in India, you had already bagged the retainer account for Automobili Lamborghini for this region. Could you tell us something about the journey that you had devised for the brand?

Ans: Building of our heritage was what we achieved. Our first two clients were – Amnesty and Lamborghini. Very different sectors, very different challenges! We are the coolest consultancy! India needs to be energy efficient, which will make a huge difference to the country. There’s potential development in education sector, we see a huge potential for online platforms, and there’s a huge need for globalization of studies. India is at the forefront. Now we are diversifying into other areas  what technology can bring;  we see an alignment between smart cities, healthcare, finance etc and our endeavour is to make it understandable to everyone.

Qn: You were involved in a diverse range of work in Asia – like the Audi “Green Driving” campaign and the successful “Driving Dream” project, which is still recognised by UNICEF as the best Public Private Partnership in China. Then there was work with the Beijing 2000 Olympic Bid Committee, World Health Organisation, during the SARS outbreak in 2003, the localised strategy for Novartis for its GIPAP programme launch in China and the repositioning of Audi in the Chinese market. How would you view your achievement in India?

Ans: I thought I was doing the best thing. Every year, I was doing exciting things. Our business is changing every year. The work I did for Beijing 2000 Olympics and for World Health Organisation, during the SARS outbreak in 2003 – were fascinating. How a country like China operates and interacts with the outside world was an eyeopener! They had no idea how to position themselves. The storytelling was ‘communicating’ like propaganda. In our contribution in the SARS issue, we had to work with eight government bodies and align them together, which was fascinating! We media trained the Mayor of Beijing; there were press conferences and we had to monitor global media (Australia, Bangladesh etc) which they had never done before. What’s special today is that the Chinese government is going to see the night and day!

In the case of Audi, we were the first PR consultancy to create a CSR division, when CSR was not the flavor of the day. We decided to create the programme, build up to the Olympics in 2008, and worked 4 years in advance (2004). We created a group of ambassadors involved with the CSR, and it turned out to be a winning programme! The CSR programme for Michelin was a platform to make cars more ‘green’. In China and Brazil, there were different solutions. Looking back, we did some fantastic work. Today it’s new communication, you have social media, internal and external stakeholders  and CSR reporting which engages stakeholders.

Qn: You are described as a professional with a thorough understanding of how to create and implement reputation-building programmes throughout the region, which included positioning and product launches for Louis Vuitton, Christian Dior, Procter & Gamble. Please tell us something about how you evolved these programmes?

Ans: My career in PR began 30 years ago and the first 2 years were in China, which involved mainly contract signing; from that I moved  to product launches, market exits, crises – more broader areas. Now, I can assess the needs of a client and I know exactly how to build a company’s reputation, which comes handy today. So, whether it is issues management, downsizing, market entry/exit – I can make sense out of it and come out with the right solutions. At the end of the day, planning the right content can bring about change, and this is what I bring to the table.

Qn: You have represented the governments of Finland, France and Brazil. How was this experience?

Ans: There are differences in clients and their needs are different. Different cultures, relationships, diverse management strategies. The countries are different – China, Columbia, Singapore and you fight against clichés and work towards how to make changes to address your objectives. Personally it has been fascinating, and yes, sometimes frustrating too. I have not promoted India abroad, but would love to do so! India really, has a tremendous story to say.

Qn: From its earliest days in the 1950s, Ruder Finn, has recognized the importance of social responsibility in public relations and its impact on business. Where has your CSR capability reached today?

Ans: We are experts on CSR and today, CSR is so integrated with the business. Every single client servicing team is aware how CSR is linked to all clients, and how it is completely linked to all businesses.

Qn: What is the road ahead both for Ruder Finn and you? What are the focus areas for this financial year?

Ans: Trends that shape communication may change in the next two years! Our focus will remain to deliver results for our clients, business growth, and also to allow the team to grow. Within our community at large, we need to be proud. We will continue to focus on good work, gratifying client needs, strengthen our digital abilities, media relations, devise strategies which is critical, local knowledge is also critical. We hope to integrate all the elements, keeping the core element intact – storytelling.

1 Comment on "“I see future CEOs coming from Public Relations!”"

Gearing up for PR of the future