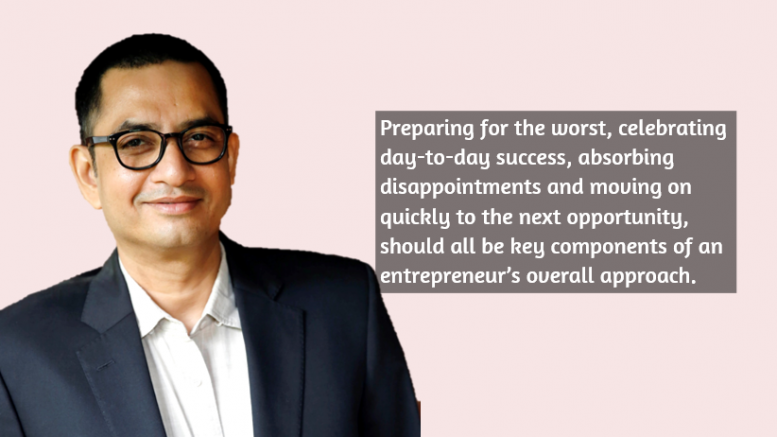 True, we live in a time when change is the only constant. What does ‘change’ actually mean to each one of us? Our reactions may vary. Change can ring in uncertainty, some amount of chaos and definitely disruption, as we see around us today. Change can track fear in some, excitement in others, or for that matter, it can spark off unease or anxiety. But whether we are open to change or not, today, we can see the changing landscape flitting by. It was the search for change, to be on the cutting edge, that led Dhrubajyoti Gayan, Managing Director, Candour Communications to step into the world of Public Relations.

Tracing his career, he crossed the biggest landmark when he stepped into entrepreneurship in 2009 – when he launched Candour Communications. Prior to that, he worked with many leading PR firms – he was Country Head, Brodeur India/TBWA India PR for six years, before which he was Western Region Head – PR, at TBWA\India. During the early stage of his career, he was at Genesis Burson-Marsteller (now Genesis BCW) as Consulting Associate; and his first job in PR happened to be in Perfect Relations, which he joined in 1998, and held the post of Account Manager.

In this interview with Shree Lahiri, he talks about his entry into PR, the lessons learnt early in his career, how he donned the mantle of an entrepreneur, the difference that Candour brings in, some tips for beginners and more…

RT: How did you get into Public Relations?

DG: I started working very early. In the beginning it was for the extra pocket money during college and somewhere along the way it became a full time job. All of it in the construction industry!

At some point though I realised it just wasn’t for me and started looking for a change. Had quite a few good friends in media, advertising, events, PR and so on. With their help, met several people in these fields. From these conversations, it appeared like PR would be a business, where I could hope to be rewarded comparatively quickly for hard work and make up for the time I would lose in the transition. So I made the switch.

After the initial training period at my first PR job, I was asked which practice area I was interested in. My answer was ‘anything but technology’. I was promptly put into the technology practice. No idea why that was done, but thankfully so, because I stuck with it and have loved it.

RT: What were some important lessons you learnt in the early part of your career?

DG: There are a lot of different factors which determine outcome in our profession, many of which depend on extraneous circumstances. This will be true of many professions but I believe it is more so in ours. That creates a sense of not being entirely in control as also gives rise to many grey areas when it comes to measuring success. In a service-oriented business this leads to disagreements and stress at every level, amongst peers and with clients. However, I found that if we did the basics of truly understanding what the client was looking for, agreeing on what needs to be done and just doing it honestly, and all of it completely transparently, we managed pretty well. All through though, a sense of humour helped greatly.

The other big learning came when I joined the PR function of a large advertising agency. I realised fairly quickly how little I knew about the overall business of brand and communication and started listening and absorbing from some of the best people in the industry. The nine odd years that I spent there, gave me some invaluable experience. One really needs a deep and insightful view of what a client’s business is about and what they are trying to do and with whom. That, combined with the capability to understand and sync with all the other facets of marketing and communications is critical to the success of any campaign.

RT: What are your thoughts on the way PR has evolved?

DG: For a long time I think the business was fairly static. Yes, we added on one more service offering here and there and got more structured in our approach to training, content or measurement. However the last 10 years or so have been another ball game altogether. That I suppose is largely due to digitisation. Sometimes I think it is just that the world around us has evolved and we have followed, more compulsion than foresight.

Whatever it is though, the business has changed a lot and I believe for the better. We have realised the critical need to connect actions to outcome and in a acutely measurable way. We are also going deeper and further in terms of our knowledge and services. At times we might struggle but eventually, we do okay.

RT: What inspired you to become an entrepreneur and launch Candour?

DG: I was heading the joint venture between TBWA and Brodeur (both Omnicom Group companies), called Brodeur India and after about nine years within the group, was getting very comfortable. Then some acquisition/consolidation happened within the group which thankfully shook me out of my reverie. Frankly speaking, had no clue about what I would do next, since the initial goal was a generic ‘to head a business’. Had already done that for seven odd years but never got around to recalibrating it!

At this point, I would have loved to cite a nice inspirational back story but the truth is that friends, colleagues and clients were the real influencers, and the favourable situation helped. I started speaking to more and more people around and was very pleasantly surprised with the support I received from all quarters. One day I just decided to go for it.

RT: What were the challenges of entrepreneurship?

DG: I had always worked in large organisations, before starting off on my own and in such set-ups it is easy to take things for granted. There is an existing infrastructure as well as systems and processes that helps one along. Then there is a way how the eco-system of clients, employees and partners will react to people from large organisations. Things are very different for a small-time entrepreneur. Coming to terms with and adapting to the new reality was a challenge in the beginning.

There are many other challenges that one is faced with on an ongoing basis but it is mostly about how you prepare yourself internally to deal with them. I believe it is critical not to take anything too seriously. Preparing for the worst, celebrating day-to-day successes, absorbing disappointments and moving on quickly to the next opportunity should all be key components of the entrepreneur’s overall approach.

RT: How does Candour stand out in a market that has become largely cluttered?

DG: We concentrate on the basics of working earnestly, building relationships, providing value to our clients and learning something new all the time. Whether by design or circumstances, we have become very strong in areas such as technology, healthcare and education. Being part of some highly innovative international agency networks has helped us remain up to speed on global standards and processes. I think this combination of belief in earnest work, strength in some areas and generally keeping abreast of everything that happens around us has helped in claiming a space for ourselves, however small, within the profession.

RT: Name a  couple of interesting campaigns that you have worked on over the last few years?

DG: There have been too many I am proud of and I fear I will do injustice to the clients and colleagues who worked with me on all of them if I just name a couple. Having said that, personally being part of the evolution of the NIIT group over the last two decades; handling one of the first industry relations/speakers bureau campaigns in the country for IBM GBS; country wide KOL programmes for Johnson and Johnson Medical; many of the marketing programmes that we run for B2B tech companies are some that come to mind.

RT: Where do you see Candour five years from now?

DG: We have always been a tech-first consultancy. Increasingly, we are becoming more of a tech-focussed B2B marketing firm and that’s where I expect we will be a few years hence. The scale and depth of our services will increase as we will continue to specialise in this space.

RT: How do you spend your leisure time?

DG: I am a complete foodie, so hunting for the next gastronomic high is always on the agenda. I love cooking and am highly likely to bore people talking about where I picked up some ingredient from and how much marination a particular meat requires. In recent times, I have also tried to get into some food-related businesses. Otherwise, I like a good book and am very passionate about travel. Road trips, trekking or just lying on the beach are all taken very seriously within the wonderful family and friends I am surrounded by.

RT: What is your advice for youngsters keen to join the PR business?

DG: Build your content capabilities, upskill and reskill yourself constantly, especially on digital and pick up good working knowledge of all forms of communication. Read a lot. Find your own style and inspiration, you don’t always need to follow management gurus and their teachings.

Be the first to comment on "In Conversation with Dhrubajyoti Gayan"

Taking the team along