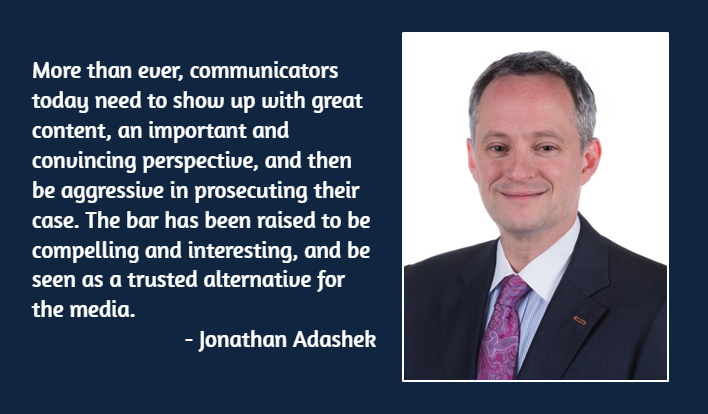 RT: What does it take to be the driver of reputation at one of the most iconic technology brands?

JA: IBM’s history has been built on reinvention, as well as adhering to the company’s purpose to “Be Essential.” These two key points are foremost on my mind when thinking about reputation. How are we consistently reinventing ourselves and what are we doing to stay essential?

The reinvention component is all about using technology to improve business and making the world better through our technology and our actions. In communications, we have a big impact on driving that reputation. Since we are not a consumer brand, we need to tap into the stories and examples that resonate with all kinds of audiences. We need to have a front-row seat to help steer IBM as we develop programs and points-of-view to ensure that they support our reputation and are meaningful to the average person.

Initiatives such as STEM for Girls and Open P-Tech, help further IBM’s reputation as a company committed to using tech for good, while programs like Call for Code and Emb(race), are helping to change the conversation on how we respond to natural disasters, global pandemics, opportunities for underrepresented professionals in the tech space, and other social issues.

But what does it take to make this all happen – a great team.  The best laid plans never get off the ground if you do not have the right people to bring them to life.

RT: How do you see Public Relations evolve in 2020, given that the world is witnessing the unexpected?

JA: There is no doubt that we live in a changing world, and that the full effects of those changes may not be known for some time. The way we work is different, with more and more employees working remotely, less travel and even changed office environments. I think you will be seeing a lot less large-scale events. In a post pandemic world, I would say that it’s less likely that you will see someone fly from New York to Mumbai for a meeting and fly home the next day.

But it’s more than just being there, face-to-face, important as that has been. More than ever, communicators need to show up with great content, an important and convincing perspective, and then be aggressive in prosecuting their case.  The bar has been raised to be compelling and interesting, and be seen as a trusted alternative for the media. The best communicators will need to keep refining their messages, keep earning trust, and keep showing the relevance of their client and brand.

That’s what it’ll take to win now, more than ever before, and that’s what we’re helping our teams achieve at IBM. The good news is that we are living in a geo-agnostic world. With so many teams using remote-learning tools, we now have the ability to tap into teams on a global scale in a way that we have rarely, if ever, been able to do.

RT: You have the rare distinction of being one of the few CCOs who has been based across three continents. How do Europe, North America and Asia differ in terms of corporate communications?

JA: I would say that there are not just differences in regions, but differences between countries. You can’t talk about Asia or Europe in one broad brush. I have found there are important differences in styles and approaches to corporate communications around the globe, so the first thing is to accept that it takes adaptability and an understanding of the cultural roots of communication styles in order to succeed.

The second point is to trust your local team and the knowledge they bring to the table. I’ve learned from working in different countries that your local teams will know how to deliver the message in a way that adapts to the culture you’re operating in.

And the third point is that some things need to be true wherever you go — your company’s values for example — those don’t change. Your tactics may differ due to the market, but your brand and its value are consistent globally.

RT: If you were to choose between political communication and business communication (having worked for a Presidential campaign and at the White House previously) which one would you choose and why?

JA: The two are not as different as you might think. Both try to develop original and engaging content to deliver a timely and important message to the audience to which they broadcast. There is also a similar sense of excitement and immediacy, sharing a message with the world and getting feedback that tells you you’re making a difference. At IBM, as with politics, the task is to make sure that message resonates with your audience and to constantly show that the work you’re doing matters. I am really happy where I am now, and I think my time in the White House was great preparation.

JA: The key is adaptability. The messages are going to change rapidly, and the tools for delivering those messages are going to change just as fast. In order to communicate effectively in the world in which we’re living these days, you have to almost stay one step ahead of the message. To anticipate what is coming before it does. That’s not an easy thing in a climate like this, but that’s the challenge we as communicators face every day.

Be the first to comment on "In Conversation with Jonathan Adashek"

Eight reasons to be at #PRAXIS8