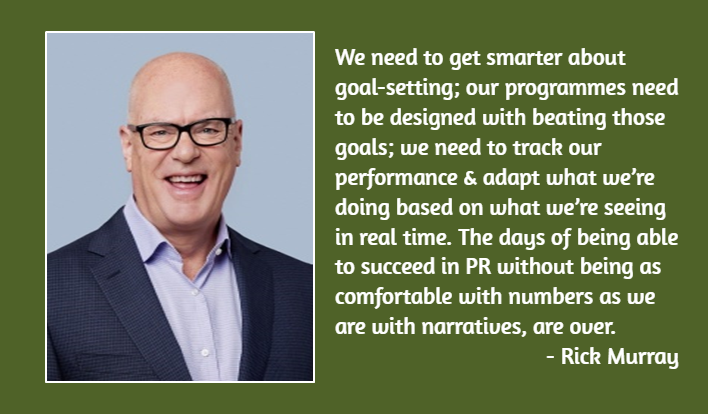 RT: What are the key trends that are changing the game in the PR business?

RM: I could say purpose, ESG or the blurring of the lines between all communications disciplines, but to me, being able to deliver on each of those across paid, earned, owned and social channels is now table stakes. The one big unavoidable trend I see is this: we are all increasingly accountable for producing tangible results that change how people think, feel and act. That means we all need to get a lot smarter about goal-setting; our programs need to be designed with beating those goals in mind; and we need to track our performance and adapt what we’re doing based on what we’re seeing in real time.  The days of being able to succeed in PR without being as comfortable with numbers as we are with narratives are over.

RT: You have had a prolific career initially in marketing and later in consulting. What has been the highlight of your 40 years in corporate America?

RM: First off, it’s not all be in the US; I’ve spent 10 years over two separate stints in Canada, and loved each. But I’d have to say that the highlight isn’t a role or an accomplishment, it’s the people I have been privileged to work for and with. I’ve been part of some amazing teams, and I’ve also had the chance to give many who were just starting out their first shot. It’s incredibly gratifying to see their careers flourish. At the end of the day, I think that’s the most important mark any leader can make.

RT: SHIFT was an early champion of the integration of digital and social media in traditional PR. What’s the next big thing for the company?

RM: We’re in the process of launching a new offering we’re calling Optimised PR. Our data was telling us that 90% of earned content had no measurable long tail value. Basically, because it wasn’t optimised for SEO, it essentially became invisible shortly after it first appeared. Our teams can help clients create content that outperforms their competitors’ where it counts – the funnel. And we’re willing to back that statement up with performance-based compensation.

RT: You have been a major champion of diversity and inclusion at the workplace. What drives you to do that?

RM: Simply this: it’s the right thing to do. Indeed, it’s always been the right thing to do, yet for any number of reasons – including what I can only believe is systemic racism – the PR industry in North America is still largely white, and its leadership largely male. A few years back we were doing some on campus recruiting and weren’t seeing any diverse candidates from the PR or Communications programmes. We dug a little deeper to learn that one of the reasons why many diverse students didn’t even know what PR was. They were majoring in liberal arts. Yet so many consultancies prioritise candidates from PR and Communications programmes because they feel their onboarding will be easier. That’s not good enough. We have to work harder to correct a century of inequality. All of us, SHIFT included.

RM: Unfortunately, I believe the unpredictability that we have been waking up to every day since COVID hit will be with us until a proven vaccine has been made available to the majority of the population. Realistically, that means another year plus of remote working, remote schooling and way too much family time. It’s another year where everyone you speak with will be super stressed out and doing their level best to keep themselves together. And it’s another year where some businesses will thrive while others will struggle to survive. As hard as it may seem from time to time, we’re the ones called on in a crisis, so we need to buckle up and help our companies and/or clients ride out the storm. The upside? Leadership will come to place greater value our counsel on a day in and day out basis.

Be the first to comment on "In Conversation with Rick Murray"

Rebuilding trust with patients: Why effective communication is crucial for healthcare organisations